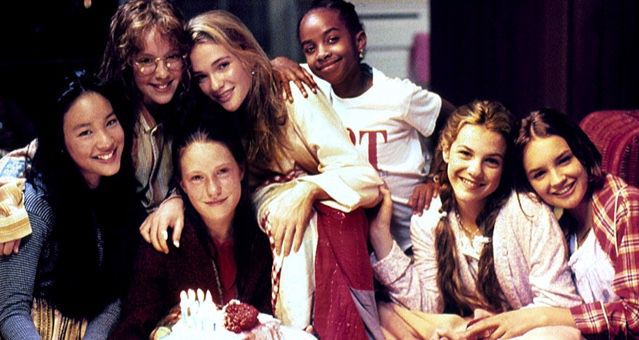 This content contains affiliate links. When you buy through these links, we may earn an affiliate commission.
With a new Baby-Sitters Club TV series coming to Netflix, we're getting nostalgic about our favorite group of teen babysitters. What was so great about the original BSC series by Ann M. Martin is that each girl, from Kristy to Mallory, felt like a real person with distinct personality traits and interests. So much so that it's fun to apply personality tests to these beloved characters. The Enneagram is a system that breaks personalities down into nine distinct types. I've listed my best guess for the Enneagram numbers of Baby-Sitters Club characters below. You can read more about the personality types here and take your own test online. [caption id="attachment_276282" align="aligncenter" width="500"] 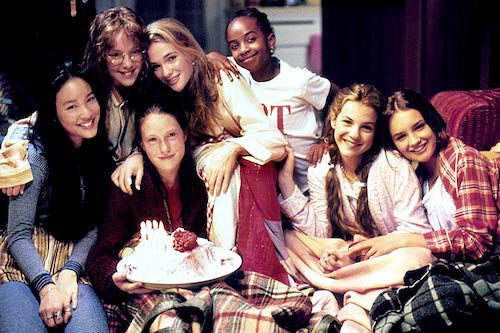 Will a new BSC TV show be as iconic as the 1995 movie? Image from IMDb.[/caption] 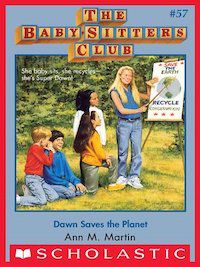 Type 1s are known as “the rational, idealistic type: principled, purposeful, self-controlled, and perfectionistic.” Hi, Dawn! Our favorite California girl is a typical type 1. She's an individual whose principles are more important to her than what others think, and she sticks to those principles, whether it's asking her pint-sized charges not to play with guns or campaigning for the environment (see Dawn Saves the Planet). She's always up for improving the world in some way, a characteristic of many type 1s. Dawn is usually more laid-back than a typical type 1, though—must be that California upbringing!

Type 2s are caring and generous. It’s important to them to please others and demonstrate their affection. Just like Mary Anne Spier, BSC secretary. Mary Anne is shy and sensitive, in tune with her own emotions and everyone else's. Even her role in the club means she always knows what's going on with everyone and who is available to do what. She's often the first to offer sympathy to a friend or remind someone else (usually Kristy) to be a bit more empathetic. Sometimes, a type 2's desire to help leads them to become too involved in someone else's problems, like when Mary Anne tries to fix a fight between Jessi and Mallory in Mary Anne in the Middle. Type 2s are motivated by compassion and doing good for others.

An achiever is motivated by success, and so is Shannon Kilbourne, alternate member of the BSC. Though readers never get to know her that well, what we do learn is that she's a member of every single team and club in Stoneybrook. She studies all the time, she tap dances, she takes French, and has about a million other extracurricular activities…girlfriend is a classic "adaptable and driven" type 3. Like many type 3s, Shannon is a bit of a workaholic, even though she's only 13. 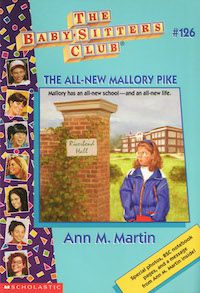 Typical type 4 personality traits include being expressive, emotionally aware, and sensitive. Type 4s are willing to face up to themselves and their emotions. But they also think they are one-of-a-kind, unlike others, which is why this type is called the Individualist. Type 4s are also prone to self-pity; they have a tendency to believe that no one will understand them.  The babysitter who fits this Enneagram type is Mallory! Mallory wants to be a writer, so she's sensitive to the people around her and highly observant. She also spends a lot of time thinking about her own place in the world. Sometimes she feels lost in the BSC, and she feels especially put-upon at home, where she is sometimes overlooked because of her seven (!) siblings. She feels that she's more mature than her parents give her credit for and is constantly trying to make her own decisions, dealing with her low self-esteem by imagining her amazing future as a bestselling author (a classic type 4 coping technique). For example, in Mallory on Strike she protests her place in her family, and in The All-New Mallory Pike she heads off to boarding school, which she thinks will help her reach her full potential.

Type 5s are intense thinkers whose curiosity sometime leads them to isolate themselves. They are driven by a need to understand how the world works, which sometimes takes them away from reality. They are independent and innovative. None of our favorite baby-sitters really fit this category, but there is one peripheral character who does: Janine Kishi, Claudia's older sister. A certified genius (seriously), Janine spends most of her time in her room, thinking and doing homework.

Figuring out the Enneagram numbers of Baby-Sitters Club characters can be hard when their personalities are composed of things like "from New York" and "has diabetes." Yes, that's Stacey. For her, I've landed on type 6, the "committed, security-oriented type." Type 6s are responsible and trustworthy, and so is Stacey—she's often described as mature for her age, plus she is responsible for managing her diabetes AND handling all of the BSC's money. Stacey is very loyal to her best friend Claudia, a hallmark of a type 6. Type 6s can also be anxious and easily anticipate problems. Stacey does worry about her health and what people will think of her, which is why she keeps her diabetes a secret when she first moves to Stoneybrook. But I'd say Stacey has more self-confidence than the average type 6. 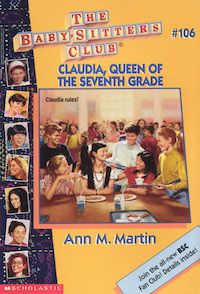 Type 7s are known as the "busy, fun-loving type," who enjoy new experiences and having fun but can be impatient and easily distracted. I'd say that describes Claudia pretty well: she likes to enjoy things (her contraband Nancy Drew books and candy, which, who can blame her?) but can be a bit scattered (messy room, can't focus on schoolwork). Claudia is very creative and passionate about art and fashion, which fits well with the description of type 7s as "bold and vivacious, pursuing what they want in life with a cheerful determination." The storyline where Claudia is sent back to repeat seventh grade is a good example of what makes her a type 7. At first, she's embarrassed and upset, but she throws herself into the new experience and ends up making lots of new friends—so many that she becomes Claudia, Queen of the Seventh Grade.

Has there ever been a better example of a type 8 than Kristy Thomas, the BSC's fearless leader and inventor of the whole darn thing? She is "powerful" and "dominating" just like a good type 8. Type 8s are confident and assertive, sure in the rightness of their ideas. Just like Kristy. She's known to be a bit bossy and she definitely likes to be in charge. Many type 8s find it easy to inspire people to follow them in their plans…such as starting a babysitting club.  I would also place Abby Stevenson here. Remember Abby? She was introduced late in the series as something of a foil for Kristy. They have similar personalities, which leads them to clash sometimes. Abby is not as organized or controlling as Kristy, but she is outgoing and likes to voice her opinion…especially when it's the opposite of Kristy's.

Type 9s are called peacemakers because they're easygoing and agreeable. They can be trusting and optimistic, willing to go along with others and making sure things run smoothly. But when type 9s go too far to preserve harmony, they can unintentionally minimize conflict or be reluctant to address problems. Two members of the BSC fit this category: Jessi and Logan.  Like many of the BSC characters, including Claudia and Mallory, Jessi's most defining characteristic is her passion for art—in her case, for dance. It can be harder to get a sense of her personality, other than stretching all the time. Jessi is sweet and mature. Like Mallory, she wants her parents to take her more seriously. She is always willing to pitch in and help make one of Kristy's ideas a success. In Jessi's Horrible Prank, though, we see what happens when Jessi goes along with some other kids' idea to prank one of their teachers. Although she knows it's wrong, she goes ahead anyway to avoid conflict. Very type 9.  In my memory, there isn't much to Logan beyond his apparently dreamy southern accent and Cam Geary-esque good looks. He's usually willing to go along with what Mary Anne wants or help the baby-sitters carry out their elaborate fundraisers, parties, and celebrations. So he gets classified a type 9. Enjoyed reading about the Enneagram numbers of Baby-Sitters Club characters and looking for more Enneagram numbers of literary characters? We've done the March sisters of Little Women and 99 other literary characters. Plus, you can check out these suggestions for reading more about the Enneagram.