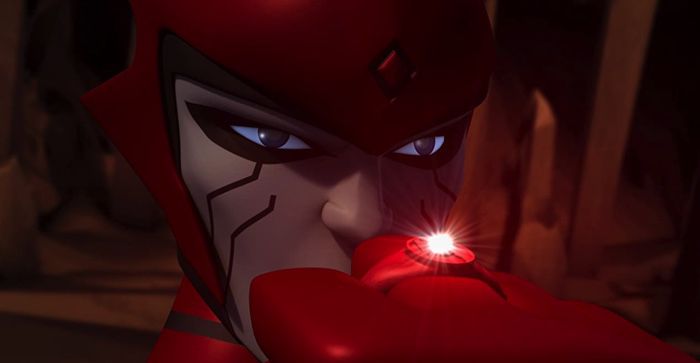 2020 also happens to be a year in which several DC characters are celebrating the 80th anniversaries of their first appearances. Next to hit the milestone is Green Lantern, who made his first appearance in All-American Comics #16 (July, 1940). Like Robin, Green Lantern has become legacy title, though the first person to use the title wasn’t a member of the Corps. That changed in 1959 when a Green Lantern ring found Hal Jordan. Since then, various Lanterns have flown around doing various Lantern things.

Because of the 80th Anniversary of Alan Scott’s first appearance, I’ve been focusing the B-List Bonanza on Scott and some of his conceptual dependents, various members of the Green Lantern Corps. While I’m staying firmly within the Lanternverse today, I’m going to detour a bit to highlight one of my all time favorite non-Greens; I’m also admittedly cheating, because he’s a character not from comics but from the GL animated series. 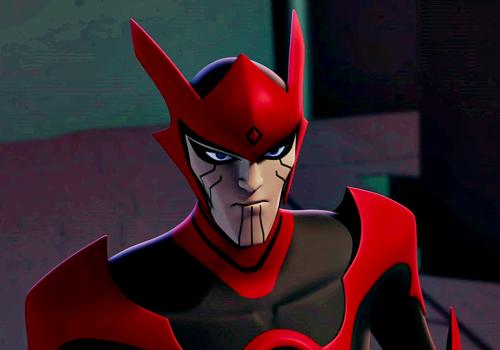 The Story (So Far)

Razer was a man so in love with his wife Ilana he was willing to do anything to protect her, including joining the local militia when they went to war against the corrupt government of his home planet, Volkreg. She begged him not to go, explaining that fighting would only lead to more violence, but Razer, desperately afraid to lose her, disregarded her concerns. When he eventually returned home, he found his city–including their house–in ruins and Ilana dead. Though she had, in fact, been murdered by the Red Lantern Atrocitus, Razer blamed the civil war, and himself.

Enraged and desperate for vengeance, when a Red Lantern Ring appeared, Razer claimed it (reoccurring theme in the Lanternverse: smart guy, feeling his feelings, ring appears, gets chatty, guy does what ring says for no logical reason) and flies off to join his fellow Reds. The first one he encounters is torturing a Green Lantern, to which Razer, not yet entirely consumed by his ring’s energy, takes exception; Zillius Zox (which is like, the best/worst name ever) tells Razer to take it up with the boss, who happens to be Atrocitus.

After Zillius Zox finishes his Green Lantern off, he persuades Razer to join him in going after another Green but woe betide them because they run into Hal Jordan and Kilowog. The latter handles Zox without issue and Razer goes after Jordan, almost managing to kick his ass but ultimately having his handed to him, at which point Razer decides he doesn’t like Jordan all that much (with you, buddy, except in this one incarnation). After being captured by Hal and Kilowog, Razer requests death; they take him to prison instead, where he’s forced to relive memories of Ilana before the Greens realize prisoners are being tortured and return to bust him out. Hal takes Razer’s Ring as a precaution (why did they let him keep it before? I have no idea). When the ship’s AI, Aya, who can download into an android body, explains she visited Razer in prison and saw his memories, filling the Greens in on what they contained, Hal returns Razer’s Ring and tells Razer he’s going with them on their mission to defeat the Reds because everyone deserves a shot at redemption.

Take it from the former host of Parallax. 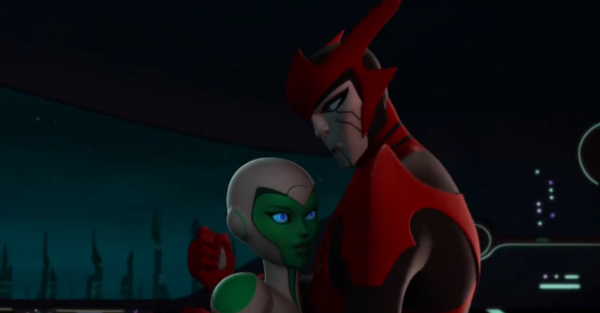 It takes some time for Razer to prove to the others, especially Kilowog, that he’s trustworthy and willing to be a (super surly) member of the team. And as it stands he’s still powered by rage, which is an advantage at times (when he and Hal find bugs chewing on the wiring in the engine of their ship, green energy fails to phase them but red energy poofs them just fine) and a danger at others (when Razer loses his temper and attacks one of the Blue Lanterns). When he eventually discovers it was Atrocitus who murdered Ilana, he lets rage consume him again, endangering his teammates while he makes a run at the Red Lantern’s home world and his nemesis. He fails to take Atrocitus out then, though the Green Lanterns do eventually defeat the Red Lanterns when the full Corps face one another.

Following the Red Lantern War, Razer goes to train with the Blue Lanterns, hoping they’ll be able to help him learn to control his rage. When Hal and Kilowog come seeking advice on how to deal with the Manhunters, planet killing robots created by the Guardians who also supposedly destroyed them but apparently not (comics!), however, Razer is pulled back into the conflict when one of the Manhunters injures Aya. In order to save her consciousness, Aya uploads herself into a disabled Manhunter and unexpectedly merges with it, becoming queen of the Manhunters and attacking the Green Lanterns. Hal, Kilowog, and Razer attempt to disable Aya without killing her, but fail; Razer seeks Aya out with the intention of assassinating her. He finds her in a pocket dimension where she’s holding Hal hostage but, despite his rage at the idea of losing her, can’t bring the knife down because his love for her is stronger. Aya is able to override her programming long enough to divert the Manhunters into deep space.

After healing from his battle injuries, Razer goes in search of her, followed by a Blue Ring.

And that is the end of the series and I will die angry about it.

Have I mentioned before that morally ambiguous characters are my favorite? The thing that grabbed me about Razer immediately is that he isn’t even ambiguous. He is never evil. He is frustrated and confused and in pain but never evil. He has tried other paths and they have failed him. He has tried your way and it shattered his life. In the moment when the Red Ring appears to him, it is the only option left; Atrocitius made sure of it. And even if he hadn’t, even if the Ring had appeared at random, as Orlando Jones’s Mr. Nancy phrased it so perfectly in his first appearance on American Gods, “Anger gets shit done” when the “right” way has left your life in ruins.