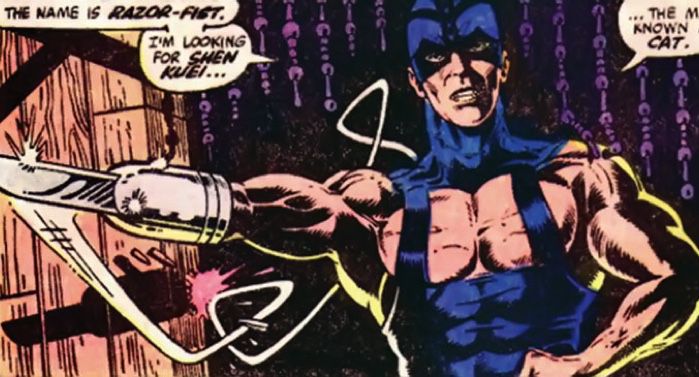 I was planning to bring you bios of all the characters featured in Shang Chi and the Legend of the Ten Rings (July 9, 2021) but I discovered something interesting as I commenced research: as far as I can tell, with the exception of the titular hero, the main villain (who I’ve already covered), and one hench, they’re all new. Which is pretty rad because Marvel can for sure use some new characters of Chinese origin who weren’t “born” in the ’60s and ’70s, who haven’t had to struggle to overcome racist stereotypes, and don’t have names that make us want to throw things.

That said, since we have covered Wenwu (formerly The Mandarin—see what I mean about the names?) let us delve into the background for said hench:

The first Razor Fist was one William Young (Masters of Kung Fu #29 (June, 1975) whose employer replaced his hands with razor blades just for funsies. Which is why you should always check the fine print, kids. Shang-Chi came after Young’s villainous master and Young was caught in the crossfire. The henches really need a union.

Doctor Doom, hearing of the enhanced (if unlucky) bodyguard, decided to give some robot versions a whirl and created not one but two copies he sent against Shang-Chi, because Doctor Doom liked to do stuff like that. Latveria probably has a hench union. Doom was cool like that.

The second Razor Fist was actually a pair of brothers who started off taking turns wearing the mantle. Douglas and William Scott (first appearances: Masters of Kung Fu #125, October, 1981) originally earned the name due to the speed and precision of their punches. Their boss, the same fellow who hired William Young, suddenly short on henchmen (I wonder why) waited until each of the brothers conveniently lost a hand in a car accident to give them blade hands and sent them out into the big, wide, dangerous world to exact vengeance on Shang-Chi for his previous, entirely oriented ass-whupping. Unfortunately, like Young, Douglas was killed in the crossfire when they eventually located their target. By their boss.

William Scott managed to escape but encountered Colleen Wing (of both Daughters of the Dragon and Heroes for Hire fame) while on the run and lost his other hand, which was also replaced by a stabby thing.

Razor Fist tangled with Hawkeye in an attempt to win the latter’s arm for a trophy (they took this arm theme pretty far), attacked the West Coast Avengers, got his ass beaten by Mockingbird in retaliation for both, then decided to go after Wolverine, which is never ever ever ever a good idea. To no one’s surprise, this prompted one of his many enemies to hire Elektra—by far the superior assassin—to take Razor Fist out, which she seemed to have done until he popped up to ruin Spider-Man’s day.

His resurrection was never explained.

He, along with several other villains, stirred up trouble during Civil War, doing what he could to widen the gap between the heroes in favor of registration and those against. He also helps lure Shang-Chi to London by helping a secret organization murder an undercover MI6 agent, knowing the hero would arrive to investigate and then resurrecting said agent with black magic, sending her to kill Shang-Chi. As with the other Razor Fists, Scott was betrayed by his bosses who allow their creation to tear the blades off his arms (nice, right?) and suffer the humiliation of being saved by his enemy.

Which only strengthened Scott’s resolve to band together with Shang-Chi’s other enemies to ambush him at the most annoying times, hoping to ruin his life—and even worse, and his date with Domino.

None of the Razor Fists had any superpowers. They each have strength, speed, stamina, agility, coordination, fast reflexes, balance, and endurance built up by years of training. All three Razor Fists have also spent years learning various forms of hand to hand combat and martial arts.

Whether or not the blades that have taken the place of their hands are an enhancement is a matter of opinion.

Well, you’re as ready as I can get you for Shang-Chi and the Legend of the Ten Rings. Who’s up next…