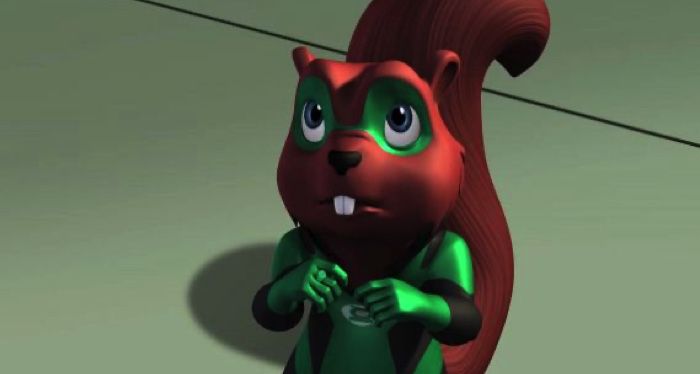 Speaking of squirrels, allow me to introduce you to an anamorphic rodent named Ch’p.

When the Crabster Army of Doctor Ub’x (yes, I did fall of my chair laughing while I typed that, thank you very much for asking) killed the Lantern charged with protecting sector 1014,  the conqueror turned his sights, and his troops, to his home planet, H’lven. The planet’s leader, Ch’p, was arrested and sentenced to death. While he was behind bars, Ch’p was visited by one of the Guardians of the Universe (so convenient!) and offered a Green Lantern ring. Ch’p accepted (who wouldn’t), used the ring to escape, and freed his people from the tyranny of the Crabsters (huzzah!)

He later traveled to Oa to be trained by Kilowog in the same class of newbs as Hal Jordan.

Ch’p kept his new job a secret from his girlfriend M’nn’e (*snort*) and his best friend D’ll (no, I don’t know why) though he was constantly busy fighting the likes of Doctor Ub’x, who apparently had difficulty learning his lesson despite his advanced degree, along with other themed villains such as Battle Beaver (crying), the Mole Patrol (where do moles live in space? I do not know), Chick Fury and his Eagle Scouts (help), and the Terrible B’gul Bears (I…honestly don’t know what to do with that one except now I kind of want a bagel). Also there were space pirates because of course there were. Ch’p also went on out-of-sector missions with other members of the Corps.

When Doctor Ub’x, who apparently really hated Ch’p, finally figured out his real identity, he hatched a nefarious plot that included kidnapping M’nn’e (choose your own mouse joke) and threatened to let the B’gul Bears eat her unless Ch’p relinquished his Lantern ring (the ol’ give me your jewelry or I’ll let some comedically named villains chow down on your lady gambit); Ch’p programmed his ring with a trap, Ub’x was foiled, and the two happy rodents got married.

The poor thing got completely screwed post-Crisis when, in the collapsed timeline, it turned out he was supposed to be very dead and M’nn’e was married to D’ll. Ch’p decided to head to Earth because at least the Lanterns there would remember him (clearly he hasn’t seen what we do to rodents ’round these parts) and who should turn up but Doctor Ub’x who…wait for it…tries to kill him. Again. With…wait for it…a Sucker Stick. Ultimately realizing they’re the only two of their kind left in the universe who remember each other, they bury the…stick, I guess, and decide to become friends and look, I’ve told y’all before I don’t make the news.

Peace made, Ch’p flew off to the Mosaic world to do a patrol with John Stewart where, alas, he got hit by a yellow (yes, specifically) space truck and died and I swear to all that is unholy I just work here.

He was revived during the Black Lantern incident as shambling corpse obsessed with death, killed some of his old teammates, and was ultimately slaughtered in turn by Guy Gardner gone Red.

Y’all didn’t believe me when I said literally anyone or anything could be a Green Lantern, did you? Come on, admit it. You thought there was a line.

There is no line.

That one is definitely a ride, though.  You can see why most of Ch’p’s appearances were in the ’80s, though he did pop up on the Green Lantern animated series as hyper competent martial artists who kicked Hal Jordan’s ass, which was pretty great. If I had to guess, I would put a fair bit of money on there being a pool of truly amazing Ch’p-centric fanfic, but I’m also a little afraid to look, so if anyone decides to take that hit for the team, please report back.