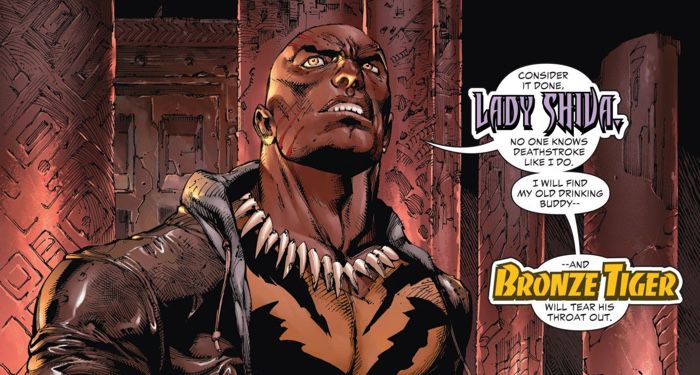 It’s been a minute since we went took a look at a hero from the Big Two, but DC graced us with the trailer for a new Batman animated feature film last week, the ’70s set, uber-groovy Batman: Soul of the Dragon set for streaming release Jan 12, 2020, and DVD release on Jan 26. Directed by Sam Liu, the newest Elseworlds story finds Bruce Wayne training in martial arts under a world renown master with DCU brawlers Ben Turner/Bronze Tiger (Michael Jai White), Shiva (Kelly Hu), and Richard Dragon (Mark Dasascos).

You’ve met Lady Shiva and Richard Dragon, DC’s answer to Danny Rand who has, at least, gotten an update for this foray into the animated universe. Time for an introduction to the last member of the retro-homage trio:

Turner killed for the first time when he was 10; waking up to find a burglar in his family’s Central City home, he grabbed a knife in the kitchen and stabbed the intruder to save his parents. He discovered, unfortunately, that even at that tender age he liked killing, and started studying martial arts as a way to channel and discipline his rage. Alas, epic fail: he became a criminal for funsies anyway. Realizing he was going to end up in jail, which wasn’t nearly as boat floaty, Turner embarked on a quest to find inner peace. It was the ’70s and that’s what people did because reading a book or taking a class was for sure out of the question.

His quest led him to Japan—because because someone in editorial at DC threw a dart at a map of Asia—where he found a teacher named O-Sensei—because someone at DC threw a dart at an eye chart and then let a dictionary open up to a random page—who soon took on a second student, none other than the erstwhile Richard Dragon. O-Sensei eventually decided he’d done all he could for the lads and sent them out into the world to find their purpose which, if you will recall, was working for G.O.O.D. (The Global Organization of Organized Defense), for whom they broke up a ring of enslaved people in the Sudan and then promptly headed to New York to live the good life in the company of Carolyn Woosan, O-Sensei’s daughter (I would like to state for the record that in neither the sources about Dragon nor Lady Shiva did anyone mention that Carolyn and therefore Susan/Shiva were O-Sensei’s daughters, get your shit together DC Wikis). Carolyn is kidnapped and Turner is conveniently shot, leaving Dragon to hero solo for a while and then to partner up with Lady Shiva.

Turner is then: targeted by assassins, finds out his sister was murdered, inherits a logging company (fuck if I know), inherits a nephew, is attacked by another assassin, is sent on a mission to China (who was the nephew? No idea), gets captured, gets poisoned, and ends up brainwashed by the League of Assassins.

Ben Turner is clearly not going to catch a break in this lifetime.

As a member of the League of Assassins, Turner adopted the name Bronze Tiger and hey, it isn’t all bad; he finally finds that inner peace he was looking for by channeling his rage into doing murders for Ra’s al Ghul and training Cassandra Cain. He also gets to kick Batman’s ass, which is no doubt very satisfying. Alas, all good things must come to an end and Turner’s memory eventually begins to return. The League apparently has a one brainwash policy, because they try to murder Turner in the hospital; Batman saves him despite the past ass kicking which, fair enough, is pretty generous. Amanda Waller finishes Turner’s deprogramming and adds him to the Suicide Squad’s roster, keeping him contained at Belle Reve between missions. He is reported to have retired in the 2011’s New 52 reboot but later rejoined the Suicide Squad.

There you have it. Consider yourself fully informed and ready to view Batman: Soul of the Dragon when it drops in January. DC has generally done pretty well with their animated universe (though I swear if I hear the word Flashpoint one more time…).