These comics will lend you some emotional support between now and 2019, when we’ll finally see the conclusion to that goddamn cliffhanger. 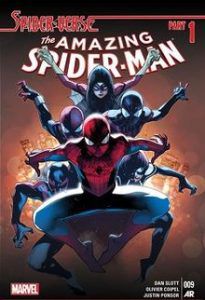 Spider-Verse by various authors and illustrators

Hated to watch Peter Parker die? Have a comic about literally hundreds of Spider heroes! This volume follows the Spiders as an evil group of villains called The Inhibitors aim to kill every last Spider in every universe. 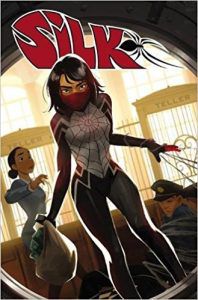 If you’re too heartbroken over Peter Parker to read stories where he’s centered, check out the story of Silk. Also known as Cindy Moon, Silk was bitten by the same spider who changed Parker’s life. In this comic series, she tries to find answers in a world that seems to just give her more questions. It leads her to team up with Black Cat, a notorious Marvel criminal, and to brush heads with some big names in the Spider-world, too. Cindy Moon is adorable and strong at the same time, a great example of a female heroine who can be vulnerable and fearless all at once.

We lost a lot of people of color in Avengers: Infinity War. Heimdall, Black Panther, Falcon, Mantis, Gamora…I know I needed a story right afterwards about a carefree black girl and her best friend, Devil Dinosaur.

Lunella Lafayette, also known as Moon Girl, is nine years old and the smartest character in the Marvel Universe. She and Devil Dinosaur (a red T-Rex from an alternate universe) have tons of wacky adventures in this lighthearted graphic novel. 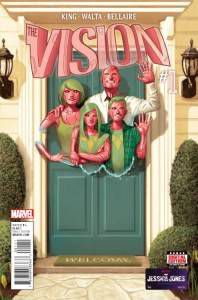 Vision is an amazingly complex character, often made one-sided by the movies. If you want to delve further into his relationship with Scarlet Witch, and his future as a superhero just trying to live a normal life, read this. Vision is one of the best series Marvel has put out in some time. It follows our red robot friend as he creates a family in his image and moves into the suburbs. Although all seems cheery on the surface, something sinister lurks under the skin of this comic. It explores Vision’s character like we’ve never seen before, with skill and poignancy. 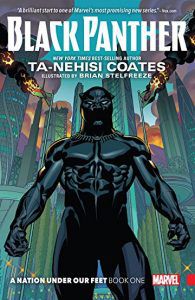 black panther: a nation under our feet vol 1 by Ta-Nehisi Coates, Brian Stelfreeze

Yup, I’m still not happy that they killed off the only major black superhero. But Chadwick Boseman has a pretty long contract with Marvel, so…*fingers crossed*. Soothe your aches and pains with one of the major inspirations for the film Black Panther. This comic series by Ta-Nehisi Coates is nuanced, powerful, and sure to evoke the same sense of Wakandan pride as the film. If you want some newer material, which might give you a sense of where the films will go in the future, check out the next read. 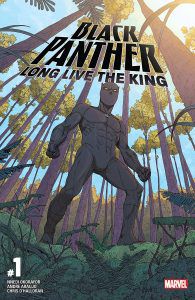 Nnedi Okorafor ranks at the top of my list for great authors. This Nigerian American author infuses dynamic action and emotion into everything she writes. This new Black Panther run is no exception. It focuses more on the internal politics and struggles of Wakanda after a revolution. The fictional African country has never seemed so tangible. (Which we need, after it was essentially wrecked by Thanos’s henchman in Avengers: Infinity War.) 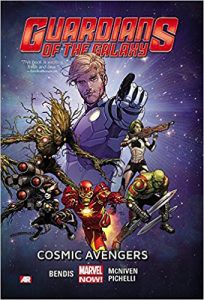 Every single one of the Guardians besides Rocket Raccoon died in Avengers: Infinity War. Huh?

But don’t worry, there’s a Guardians of the Galaxy 3 in the works, apparently. There is still hope.

Before that time, though—read the beginning of Brian Michael Bendis’s run of the Guardians series. Iron Man also joins the team for a while as they fight off more cosmic foes across the galaxy. 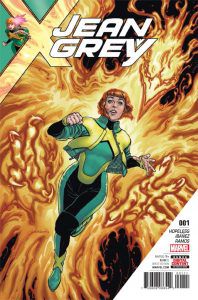 The current X-Men timeline is a bit of a mess. The current day X-Men were having a bit of world-scale trouble, so they took the original X-Men (yellow Spandex and all) to our time to fix it. A lot of stuff happened and now they can’t go back.

So, this volume follows Jean Grey (teenaged Jean from the original comics) as she struggles with her identity. She knows her history already, and it isn’t a good one. So, she pushes against destiny in this sweet comic series that’s mostly about a girl trying to grow up in a harsh world. (And to avoid becoming a planet-destroying entity. But who’s to say that isn’t relatable?) 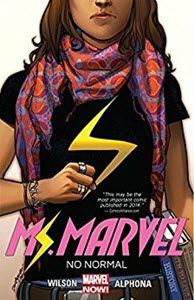 Kamala Khan made history as the first Muslim American Marvel superhero. This is the first volume of her story, wherein a teenage fangirl gets her greatest wish: to turn into Captain Marvel, her favorite superhero. But Kamala needs to learn how to be herself in a society that doesn’t quite respect that self. She navigates boys, religion, and schoolwork while fighting evildoers in her Jersey town. A perfect, heartwarming read to push against the overall despair of Avengers: Infinity War. 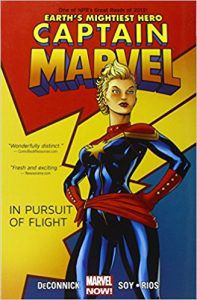 Last but not least. What was that symbol at the end of the film? Why, it was none other than the symbol of Captain Marvel, fiercest captain in the galaxy (sorry Steve Rogers). Carol Danvers is a powerful heroine who doesn’t pull any punches. She might just save all our asses in Infinity War Part 2. So, hang on to the little bit of hope we got at the end of the movie and read up on Captain Marvel all you can. (Please get us back our superheroes, Carol. I can’t bear for Teenage Groot to have to die so young.)

How did Avengers: Infinity War emotionally scar you? let us know in the comments!