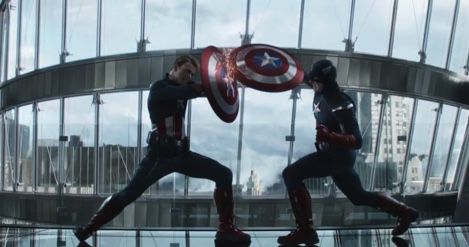 Note: This article contains both major and minor spoilers for Avengers: Endgame.

After 11 years and 21 movies, Avengers: Endgame finally gave audiences their first explicit, canonically queer character. In a scene early in the film, Steve Rogers attends a support group for people struggling with the abrupt disappearance of 50% of life on Earth. One unnamed member mentions that he managed to go on a date, incidentally with another man. Steve gives him quiet encouragement and says something inspirational, and the scene ends. The gay character is played by one of the film’s directors, Joe Russo.

On the one hand, any representation is a step forward. And it’s nice that a romantic moment between two men is portrayed as normal, healthy, and optimistic, as is the fact that Captain Moral Fortitude is all for it.

On the other hand…eleven years. Twenty-two movies. And this is all we get? An unnamed character with one scene and a handful of lines? A moment that comes off more like a gratuitous directorial cameo than anything meant to carry emotional weight? And one which in passing fridges another queer character when Russo mentions his dead/dusted previous partner? Really?

In a breathtakingly smug interview with Deadline, Joe Russo explained this choice:

“Representation is really important…It was important to us as we did four of these films, we wanted a gay character somewhere in them. We felt it was important that one of us play him, to ensure the integrity and show it is so important to the filmmakers that one of us is representing that. It is a perfect time, because one of the things that is compelling about the Marvel Universe moving forward is its focus on diversity.”

Just to unpack that:

What really struck me about the scene, was Steve’s presence. Or, more notably, a certain absence where Steve was concerned.

The thing is, for better or worse, Steve Rogers has become a flashpoint for the question of LGBTQ representation in the MCU, especially where his relationship with Bucky Barnes is concerned. Since the first Captain America movie in 2011 but especially since 2014’s Captain America: Winter Soldier, fans have read homoerotic subtext in the relationship between Steve and his childhood best friend. “Stucky” is by far the most popular pairing in the Marvel Cinematic Universe tag on Archive of Our Own, with over 38,000 stories (15,000 more than its nearest competitor, Steve/Tony), and three years ago the hashtag #givecaptainamericaaboyfriend went viral.

I have no particular dog in this race. Bucky’s role as a brainwashed Russian zombie means he’s afforded very little chance to, like, have lines and be a person, which means I have little interest in him (but also strengthens the Stucky argument, since it gives Steve little reason to save him if they aren’t in love; I mean, there’s a “brothers in arms” argument to be made, but I can’t see him breaking up the Avengers over Dum Dum Dugan). And the push for more Steve/Bucky action in the movies and fandom over characters I find more interesting has been irritating me for five years (see also: the way Bucky, a sad white guy, eclipsed the larger roles Sam and Natasha played in Winter Soldier).

So I admit I found it kind of funny when Bucky got a whopping two lines in Endgame. And I wasn’t particularly perturbed when the movie established that Steve had gone back in time and married Peggy Carter, living out his life before returning to 2023 as an old man and thoroughly slamming the door on any potential romantic future with Bucky, or any man. I like Steve and Peggy together. I’m glad they finally got to be happy. (Although I chose to believe that Peggy still had the robust career at SHIELD that she did in the initial timeline.) (Also I’m thrilled that Sam got the shield.)

In the interest of giving the Russos and screenwriters the benefit of the doubt, it’s entirely possible that they were solely motivated by the idea of removing Steve from the cycle of suffering he’d been in his entire life. Maybe they just wanted to take a man marked by a century of tragedy and give him a few decades of contentment. I can get down with that!

But to take the character who has been the center of the most vocal advocacy for queer representation in the MCU and declare that no, in fact, he was in a heterosexual relationship with a woman his whole entire life, forever…that seems pointed. His lack of emotional response to Bucky’s return seems pointed. His willingness to completely fuck up the timeline for his own happy ending but allow the best friend for whom he has repeatedly committed treason to languish for decades as a prisoner of the Soviets seems…well, wildly out of character, but also pointed.

In fact, all of Endgame posits that the true reward of heroism, the thing worth fighting for, is a heterosexual nuclear family – from Steve, to Tony, to Clint. (Clint/Coulson is the fourth most popular MCU pairing.) In that light – and the light of neither Valkyrie nor Loki being queer in the movies though they are in the comics, while the queer characters from the Black Panther and Guardians comics franchises are absent from the screen – Russo’s unnamed gay character seems even more like the flimsy window dressing that he is. Captain Marvel’s haircut can’t counterbalance that. (Although damn, it is trying to.)

The MCU isn’t over, despite the flashy finale Endgame was designed to be, and there’s still ample room for real, substantive queer representation in future movies – ideally with characters who have names and personalities and stories. Or, I don’t know, maybe the hero themself? I know it took us 18 movies to get a black hero and 21 to get a (white) female one so Frigga only knows how long it’ll take Disney to get around to giving us a queer lead, but we can only hope.

In the meantime, Russos, maybe don’t strain anything patting yourselves on the back like that. Slamming the closet door so hard on Steve had to have done some damage.