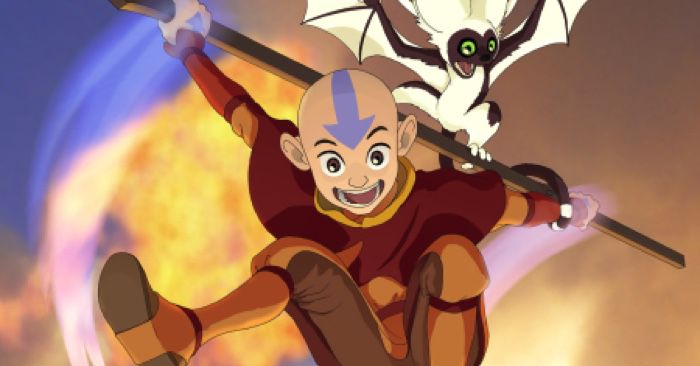 So, you’ve burned through every episode of Avatar: The Last Airbender and Legend of Korra on Netflix and now you don’t know what to do with yourself. You want more. You need more. But no matter how many times you check, alas; that little green bar is filled up under each 23 minute option.

There’s a comic for that.

There are, in fact, a lot of comics for it.

Both Avatar and Korra have generated a wealth of reading material for kids (and adults) of all ages, the vast majority of it either traditional books with pictures or heavily illustrated, interactive books (which I’m going to include here despite their not strictly fitting the usual definition because they they have more text than pictures books and also, they’re really cool). F.C. Yee’s YA novels The Rise of Kyoshi and The Shadow of Kyoshi are also in the mix but, as they’re 100% prose, all I’ll say here is that they’re extremely good and extremely bi and you should all read them immediately.

There are far too many comics to cover in a single article so I went straight to my most reliable best-of source to get some advice on which Avatar/Korra comics and illustrated titles I should highlight for you: my 8-year-old daughter, who has read each and every volume approximately eleventy billion times (what, you didn’t know eleventy billion was a number? Trust me. She sleeps with these books. It is). 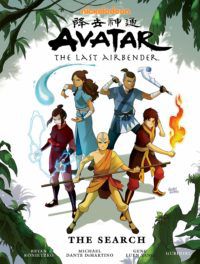 Avatar: The Last Airbender: The Search by Gene Luen Yang and Gurihiru

With stability established in the Fire Nation and across the continents, Zuko finally has time to focus on a question that has plagued both him and his sister Azula since childhood: what really happened to their mother? Knowing only that she was banished, leaving the siblings to the cruel tutelage of their father, Fire Lord Ozai, a lecture by an Earth Nation scholar about the parallels between the foundations of family and a nation leave Zuko wondering what sort of Fire Lord he’ll be as someone who has imprisoned his father, put his sister in a psychiatric facility, and left his mother to the whims of fate.

In an attempt to resolve some of the conflict within his “small nation” and hoping his doing so will make him a better leader of the larger one, Zuko has Azula released from the hospital and the two of them, along with Aang, Kitara, and Sokka, go in search of Princess Ursa. As is often the case, the quest is more complicated than expected, as is the story behind Ursa’s disappearance, her relationship with Ozai, and her desperate bid to do what she thought was best for her children. Plus giant spirits. Oh, and the fact that Azula, while legitimately suffering from paranoia, also has her own agenda and doesn’t much care how her actions affect the others.

This isn’t a light, fluffy Avatar story. I’d urge you to either read through it first or read it along with your kids, because they’re going to have questions and the age group at which this particular comic is aimed also happens to be the window in which a lot of kids are simultaneously testing boundaries and re-engaging with fear of abandonment. In the end, Zuko finds what he’s looking for—from a certain point of view—but the journey to that point is rough, buddy, and more sensitive kiddos may may need a guide to help them navigate. 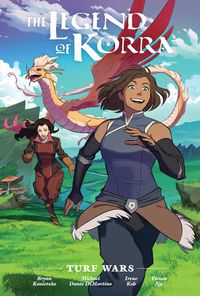 Kiddo likes this Korra arc for the story, which picks up with Korra and Asami returning from their time away in the spirit world (we saw them head there handing hand in the last few frames of the show’s final episode). Unfortunately, Republic City couldn’t hold it together while the duo was gone and someone decided to open a spirit portal in the middle of town which a developer has, in turn, decided would make a fantastic amusement park (which goes…about how you’d expect). With the refugees coming home in the aftermath of the destruction wrought by Kuvira’s forces and the Triads moving to fill the power vacuum, the Avatar and her friends are going to have their hands full—if the dark spirits don’t kill them first.

I’m particularly fond of this graphic novel trilogy because it gives us something the show danced around for ages and then let us glimpse for mere seconds before coming to an end: Korrasami. As few lesbian characters as there are in animation who survive to the end of the story, there are even fewer bisexual characters in important and/or major roles and fewer still who land in a permanent same-sex relationship. Watching Korra and Asami explore theirs unabashedly is an absolute joy. 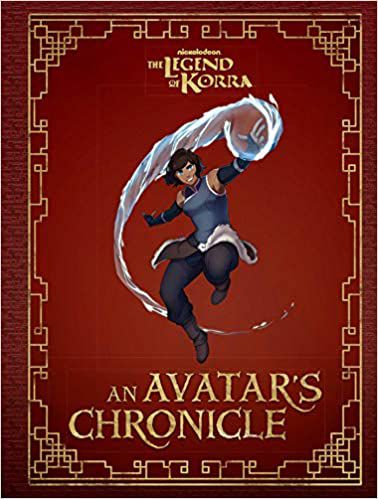 Avatar: The Last Airbender: Legacy and The Legend of Korra: An Avatar’s Chronicle by Andrea Robinson and Sora Medina

As I mentioned a little ways back, these two volumes are a sort of comic/picture book hybrid, but they’re my daughter’s favorite of the lot and there’s enough of a narrative flow to them I think I can nudge them to fit here. Legacy and An Avatar’s Chronicle are delightful compilations; the first is a journal of sorts, written by Aang for his son Tenzin, and the second a scrapbook assembled by Korra and her friends chronicling their various adventures. Both books have pieces written in each character’s voice, drawings, and maps snakily annotated with aplomb by those who wandered the various paths, as well as postcards that can be taken out and sent by the reader, quizzes, games, and recipes kids can recreate with a little help from their adults. For younger children, Legacy and An Avatar’s Chronicle are fun ways to learn more about the world in which their favorite shows are set; for older kids who might be starting to show an interest in writing, they’re fantastic tools to demonstrate the various levels of world building that go in to creating expansive, enduring universes.

We’ve only skimmed the surface of the Avatar offerings here. For a full listing of available Avatar comics click here and for a full listing of available Korra comics click here. Don’t forget to check back occasionally; there’s are still new books being published in-universe (Katara and the Pirate’s Silver by Faith Erin Hicks, Peter Waltman, and Adele Matera is scheduled for release on 10/13).