A handful authors are also successful visual artists. The great Lebanese poet Etel Adnan—co-winner of this year’s Griffin Poetry Prize—is, for instance, also an acclaimed painter. Most, however, prioritize one form over the other. Sylvia Plath gave up painting to work on her poetry. Yet she never stopped working on her visual productions.

I’ll note that there are a number of such lists of author-artists out there. The UNESCO Courier devoted an issue to such authors. But the lists are overwhelmingly male. The Courier, for instance, features only one woman among their 26 writer-artists, and she is mostly noted for having been the friend of male artists. The lists are even more overwhelmingly white. Although Lorraine Hansberry, for instance, studied painting, I didn’t find her on a single list.

Below are six men and six women primarily known for their writing, including two Nobel Prize winners, but who also created visual art.

The Danish novelist, playwright, and poet is best known for his fairytales. Yet, in addition to tales like “The Little Mermaid” and “The Emperor’s New Clothes,” he also created hundreds of fanciful paper silhouettes.

Paper cutting was a popular hobby in the late 19th century, when Andersen lived. But he was serious about his art.

“Paper cutting is the prelude to writing,” Andersen wrote in an 1867 letter.

The Hans Christian Andersen Museum in Odense has a large digital collection of the papercuts. You can see them online.

Bishop (1911–1979), winner of the 1956 Pulitzer and 1970 National Book Award, was also a gifted artist. In “Elizabeth Bishop’s Other Art,” in the New York Review of Books, William Benton explores Bishop’s paintings.

Benton writes: “With characteristic self-effacement, Bishop scarcely acknowledged herself as an artist—and yet her work, mostly watercolor and gouache, reveals a keen and original sensibility.”

Benton, who also edited a book about Bishop’s paintings called Exchanging Hats, said she enjoyed being both “innovative and invisible” as a visual artist.

Leo Tolstoy, the author of Anna Karenina and War and Peace, also enjoyed illustrating his manuscripts, children’s stories, and notebooks.

He also illustrated his children’s copy of Jules Verne’s Around the World in 80 Days.

In his son Ilya’s memoirs, Ilya remembered that his father bought the novel for them, but it was not illustrated. So Tolstoy set his hand to it.

The great Tagore (1861–1941) was winner of the 1913 Nobel Prize for Literature. The Nobel committee of that year remarked on Tagore’s “profoundly sensitive, fresh and beautiful verse, by which, with consummate skill, he has made his poetic thought, expressed in his own English words, a part of the literature of the West.”

But Tagore was also a gifted visual artist. Although most of his works were landscapes, he also painted expressive human faces.

Tagore was also, according to Live History India, a patron of the arts.

The great poet and playwright, perhaps best known for A Raisin in the Sun, also studied art. According to the Lorraine Hansberry Literary Trust, she spent the summer of 1949 in Mexico, studying painting at the University of Guadalajara. She gave the influential speech “To Be Young, Gifted, and Black” in 1964, as words of encouragement to young writers.

You can find some of her compelling artwork at the Trust’s website.

In 1973, the great Brazilian novelist Clarice Lispector was fired from Jornal do Brasil. To make up the income, she worked as a translator, but she also began to paint.

The author of Les Misérables also created visual art that was “intuitive, experimental, and inspired by Spiritualism.”

Among Hugo’s numerous, varied, and richly inventive drawings are several caricatural graphic meanderings that, in their avoidance of a pre-appointed image, are harbingers of the automatic drawings developed by the Surrealists.

The German-born Swiss poet Herman Hesse won the Nobel Prize in 1946. The Nobel committee praised “his inspired writings which, while growing in boldness and penetration, exemplify the classical humanitarian ideals and high qualities of style.”

He also painted watercolors, and he illustrated his own fantastical Piktor’s Metamorphosis.

Hesse wrote the fairytale love story in 1922, a few months after completing his Siddhartha. The tale was apparently inspired by the woman who was to become his second wife. 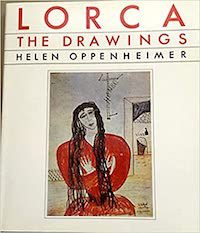 He drew a variety of masked clowns, stage sets, and surrealist portraits. In 1926, Lorca exhibited his work at a gallery in Barcelona with the help of his friend Salvador Dalí.

A number of Lorca’s drawings are available online. There’s also a book by Helen Oppenheimer: Lorca: The Drawings, Their Relation to the Poet’s Life and Work.

Plath, a poet who is best-known for her book The Bell Jar, first intended to be a visual artist. She enrolled at Smith College to study art, and switched to English only at the urging of professors.

Her art was never recognized during her lifetime. However, in 2017, the Smithsonian National Portrait Gallery held a retrospective.

Plath not only painted, but also did satiric collages, such as this one of Eisenhower.

Amantine Lucile Aurore Dupin (1804–1876) is better known by her pen name, George Sand. She was a novelist and memoirist, but she was also a working visual artist. After she separated from her husband, for instance, she attempted to make a living painting snuff boxes. Her son Maurice grew to be a painter and sculptor, and she helped him with theatre design projects.

Toward the end of her life, according to a 1957 issue of the UNESCO Courier, she painted and sold watercolors “to build up her granddaughters’ dowry.” 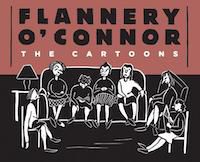 O’Connor (1925–1964) likely would not have considered herself an artist, but she was a deft cartoonist. According to Brain Pickings, she began drawing when she was around five. Her Flannery O’Connor: The Cartoons were belatedly collected into a volume, in 2012.

Maria Popova writes: “Underpinning her visual art is the same distinct blend of humor and uncompromising fierceness that makes her literary style so singular and so memorable.”