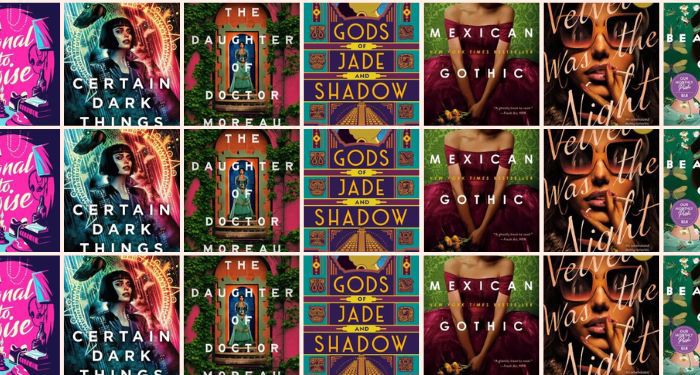 Do you have an author whose books you savor and save? The kind where you must ration your titles to leave a window for their next book to come out? One such author for me is Silvia Moreno-Garcia. And, because of that, I’m always looking for other authors like Silvia Moreno-Garcia.

Silvia Moreno-Garcia is an author who has quickly made her name in the world of storytelling with her genre-bending works. There is no genre or sub-genre that evades her scope, and there are many she’s excelled at. If you are yet to discover any work by her, may I recommend Gods of Jade and Shadow, a book based in Aztec mythology and contemporary Mexico. Another great title to get a sense of her writing is Velvet was the Night, which is a work of noir set in 1970s Mexico that showcases her skill at bringing to life a setting. Here is a reading pathway to serve as your guide.

I think a reason she has continued to be a success is that she takes fantastical topics and makes them accessible, whether it be a take on Rebecca, or Dr. Moreau’s Island of wild creatures. Her works are characterized by fierce protagonists, usually female, a bunch of gaslighting characters and what seem like unsurmountable obstacles. There is sharp dialogue, vivid locations, and memorable characters. And, with all these elements working for it, naturally you want more.

But, what do you do when you run out of all of Moreno’s books? You seek out authors like her, and let this list be your guide, of course. What you will find here are authors like Moreno-Garcia who capture some or all of what makes her work so great, and hopefully a list long enough to get you through the waiting of another one of her books.

A primary characteristic of Silvia Moreno-Garcia’s works is this all-encompassing mood she’s able to create. An author who accomplishes the same, but primarily through short stories, and now her latest debut novel, Our Share of Night, is Mariana Enriquez. Her story collection, The Dangers of Smoking Bed, has a potent, oppressive mood. This is a book queasily obsessed with death and sex and ghosts, both morbid and lustful. The dead are always crawling up from beneath the dirty streets, refusing to stay buried. Pleasure is achieved by way of self-harm or a sadistic fetish. Enríquez’s fiction — much like Moreno-Garcia’s — is startlingly effective.

Heritage, legacy, and family: this is the trifecta that often dominates Moreno-Garcia’s works. Another author who does this exceptionally well is Isabel Allende. Her stories are filled with women bound by their duty, and a way they find to flourish beyond it. One in particular is The House of the Spirits, a tumultuous epic that chronicles four generations of two extraordinary families. Strong female roles abound in this captivating story, from Rosa — who has the maritime grace of a mermaid — to Clara the soothsayer whose apocalyptic visions include exploding horses and cows that are hurled into the sea. Then there’s Tránsito Soto, the entrepreneurial prostitute who symbolizes success in the face of adversity. Dichotomies abound: good and evil, triumph and tragedy, and a surprising turn of events. Allende’s backlist is quite extensive, so you are sure to not run out of material to read for a while.

A highlight of Silvia Moreno-Garcia’s plot lines is that they are unique yet infused with moments of the ordinary. Another prolific author who does this is Perez-Reverte, who is capable of a feeling of quiet poetry in the events of his novel, and where he chooses to take them next. In the particular novel, The Flanders Panel, a 500-year-old game of chess from an old painting comes to life. Ancient mystery, romance and murder become enchanted on canvas and mirrored in reality. But only one question remains: who killed the Knight? Full of historical intrigue, this serves as a good balm for the soul.

Another genre blend that Moreno-Garcia has been able to achieve is that of fantasy with contemporary. An author that does this exceptionally well is Daniel José Older, especially with his Shadowshaper series. Sierra Santiago is a typical Brooklyn teenager just starting her summer vacation. She plans to hang out with her friends, have some fun, and finish painting her dragon mural on the wall of an old, half-finished high-rise development called the Tower, which otherwise is an unwelcome eyesore in the neighborhood. Sierra’s summer plans go sideways when she notices other murals in the neighborhood beginning to change. The colors fade. The faces cry and change expression. Her grandfather, debilitated from a stroke, becomes lucid just long enough to warn her: She is in danger and she needs to act quickly before everything she knows is destroyed.

An element that Moreno-Garcia tackles in her work and does well is what happens when women, specially women of color, are in charge and in power. An author who released a debut last year that casts a similar spell is Brenda Lozano. Witches provides us two POVs of women whose lives intersect at the investigation of a murder. Paloma was a healer who didn’t quite live up to the expectations of their father, born a boy but living as a woman, there is much turmoil in Paloma’s life. Their sister Feliciana is telling us what it is to be a curandera (healer), a woman and a proud Oaxacan within her family and community. She imparts the challenges of language and identity that she and Paloma face.

Other-worldly adventures and entangled romances are other promises held by Moreno-Garcia’s stories. She weaves in superstitions and folk lore of whatever country she bases her stories and it seamlessly blends into the plot. Another such author that accomplishes this is Yangzee Choo with her title The Night Tiger. There are two narratives that intertwine. One is about Ji Lin, an apprentice dressmaker who is moonlighting as a dancehall girl to help pay off her mother’s mahjong debts. The other is about Ren, a young houseboy whose dying master has one request: for Ren to find his severed finger that he lost in an accident and bury it in his grave within 49 days, otherwise his soul will wander the earth forever. A series of mysterious deaths shake the area and people start to talk about men who have the ability to turn into tigers. The story is rich with Malaysian and Chinese folklore, exactly what you want after Moreno-Garcia’s works.

Telling stories of empowered women navigating extremely tricky situations is another one of Moreno-Garcia’s strengths. Laura Purcell is another author who executes this plot point in her writing. In her book, The Silent Companions, we follow Elsie, recently widowed and pregnant with her first child, who arrives in a remote village. Due to her husband’s wealth, and his sudden death so soon after their marriage, rumors and scandal are breathing down Elsie’s neck. The villagers and her limited staff are quite superstitious about her and the house. Little does she know that there are more secrets waiting for her once she gets in. And in Purcell’s book The Poison Thread, we follow Dorothea, who wants to help women in prison and who stumbles upon a prisoner who claims to have supernatural power in her stitches. With writing full of gothic feels and vivid writing, she is another author to keep your stacks full.

One thing you will notice in Silvia Moreno-Garcia’s books is that she is not afraid to go into the dark places of your mind. Karen Russell is another such author that does just that. In her short story collections, such as Vampires in the Lemon Grove and Orange World, strange happenings abound: deals with the devil are struck, love stories happen with 1,000-year-old gaps, and the darkness underlying so many of our daily going-on are exposed. Truly not one to miss if you enjoy the eerie with a side of reality.

As readers and writers, it is natural to influence and be influenced by works of your fellow writers. The real magic that keeps us readers coming back is the ability to take a similar story or trope and inject it with your distinct voice, which is exactly what the authors like Silvia Moreno-Garcia do.

Looking for more authors that will immediately land on your must-read list? Check out TBR! Our book recommendation service pairs you with made-for-you books for your best reading experiences!