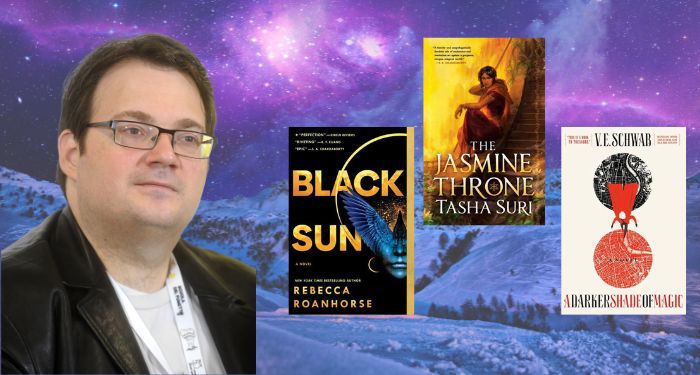 Brandon Sanderson’s vast worlds, surprising plots, and wonderful characters have taken the sci-fi fantasy world by storm. However, even more authors like Brandon Sanderson are out there waiting for you to pick them up and read without delay.

As a decade-long Sanderson fan, I have been recommending his books in the Cosmere, the Cytoverse, and his other worlds for quite a long time. I look forward to his god-level magic systems, dense world histories, and complex political systems. Often, all three are at the brink of collapse or dramatic change due to the actions of odd little dorks trying their best. So I seek out authors like Brandon Sanderson to experience the same magic. From the existence of Doomslug to Spren to that one scene where a character compares his love interest to a potato in a minefield, I cannot get enough weird little details and world-building gems. Whenever I read a Brandon Sanderson book, I always feel like I am visiting an old friend. It is equal parts comforting and emotionally devastating and I cannot help but fall in love each time.

Brandon Sanderson has talked a lot about his approach to writing and how he got started as an author as a creative writing teacher at BYU and a frequent panelist at book events (including his convention run by his company, Dragonsteel Books) and various online platforms. Before selling a single book, Sanderson wrote 13 manuscripts while working as a night clerk at a hotel. He is known for writing a lot. Since publishing his first book, Elantris, in 2005, Sanderson has not stopped.

In the Cosmere, he has his high fantasy epic, The Stormlight Archive, with four novels and two novellas. Brandon Sanderson has even teamed up with tabletop game developers and released Call to Adventure: The Stormlight Archive. I can confirm the art is fantastic and the storytelling elements make the game incredibly fun no matter how many times you play it. The Mistborn Saga has another seven books. Then there are the two standalone novels, three White Sand graphic novels, and the short story collection, Arcanum Unbounded.

Sanderson’s Cytoverse includes his YA sci-fi series, The Skyward Series, with three novels and a short story collection. Finally is everything else Brandon Sanderson has written. This includes the collection Legion: The Many Lives of Stephen Leeds, the four books in the YA sci-fi The Reckoners Series, the six books in his middle grade Alcatraz vs. the Evil Librarians series, the two books in his game novelization Infinity Blade Series, the five books he wrote in the Wheel of Time Series, and his Magic The Gathering novella. Not to mention The Rithmatist, the first book in a YA series that may never be finished.

Also, you may have recently heard about how he wrote four secret novels for fun during the pandemic. Sanderson apparently had free time in the absence of his in-person events and speaking engagements. The Kickstarter did very well, but it was unsurprising coming from someone who is frequently winning awards and on The New York Times Best Seller list. The whole thing made it clear he had the fans (myself included) willing to buy anything he writes. As a Black and Native author, Rebecca Roanhorse’s sci-fi and fantasy novels often center Navajo characters and their relationships with gods and heroes. The Sixth World series is set in a post-apocalyptic world with Native American gods and monster hunters. I promise it is perfect for fans looking for a darker, adult version of The Reckoners Series. Her high fantasy series inspired by Pre-Columbian Americas, Between Earth and Sky, is an excellent fit for fans of the Cosmere. She even has a middle grade book, Race to the Sun, and a Star Wars novelization, Resistance Reborn, for fans of his other work. I’ve found her tone and god-centered worldbuilding are a perfect fit for Sanderson fans. I would honestly recommend N. K. Jemisin to anyone interested in fantasy, but I do think she is an excellent fit for Brandon Sanderson fans as well. She has a deep back catalog for fantasy readers who like to be consumed by single authors for long stretches of time. The urban fantasy books set in New York City, The Great Cities, is an excellent option for fans of multiple points of view coming together seamlessly to defeat the big bad. The Broken Earth Trilogy, The Inheritance Trilogy, and The Dreamblood Duology are all full of empires that rise and fall over thousands of years, powerful gods, battles for territory, and individuals resisting oppression at the center of it all. That is to say, if you like Sanderson’s epic worldbuilding and wonderful characters, Jemisin is an excellent option for you. Tasha Suri is a British Punjabi author who writes South Asian–inspired fantasy novels that absolutely capture the big stakes, big magic, big empire-level government on-the-line energy Sanderson has in his adult high fantasy series. Her high fantasy series, The Burning Kingdoms and Empire of Sand, both interrogate the effects colonial rule has on the native magic systems and religious practices — often in a way where the people impacted attempt to overthrow or subvert the empire in charge. Suri’s work is perfect for fans of Sanderson’s many fantastical uprisings. Although Saara El-Arifi is a 2022 debut author, I can already tell she is someone the fantasy world should fall in love with. The Final Strife is the first book in an epic fantasy trilogy inspired by her Ghanaian and Arabian heritage. The series is absolutely perfect for fans of Mistborn’s Vin and the crew she works with to overthrow the Lord Ruler. El-Arifi’s first novel not only has a revolution waiting to overthrow the ruling class but also an unlikely chosen one. The whole thing is a lovely ride (and it’s sapphic too). M. K. England is really my recommendation for fans of The Skyward Series. They write queer YA sci-fi that will knock your socks off. The Disasters perfectly captures the energy of the unlikely group of pilots at Skyward flight academy. Then, Spellhacker is for everyone who loves the heist energy from Cytonic. In general, they are just great at building large casts of YA characters you immediately understand and fall in love with. Then they put them through the most life-threatening scenarios that could save or destroy their communities. Truly excellent all around. The Cas Russell Series by S.L. Huang is tailor-made for fans of Legion. Listen, I know the Legion fanbase might not be incredibly large, but if you are a part of it, it is your lucky day. The trilogy of Sanderson’s sci-fi mystery novellas following a detective with multiple alter egos is an excellent comp for Huang’s sci-fi thrillers. The series follows an investigator who meets a gun-for-hire using her supernatural mathematical abilities to extract anything or anyone from any situation. Trust me when I say you will want to pick up an S.L. Huang book soon. Truly, V.E. Schwab is an obvious choice for a Sanderson author comp, but they had to be included. Not only does their work span the Sanderson age range (from middle grade to YA to adult to graphic novels), but the tone and worldbuilding in their books is an excellent fit as well. The YA series I would recommend for fans of the cities and teens in The Reckoners is the Monsters of Verity series. Fans of Mistborn (and mistcloaks) will be down for the Shades of Magic series (and Kel’s coat). Also if you like Sanderson’s creative writing classes, Schwab has an excellent set of videos where they interview authors in No Write Way and discuss their writing process. I am going to start my Patrick Rothfuss recommendation with a warning. If you start this series, I am not responsible for the fact that you may never finish it. The second book, The Wise Man’s Fear, was published in 2011 and the likelihood we will ever get a final book feels like it gets further away with every passing year. Now that that is all settled, the Kingkiller Chronicle is a great option for fans of the Cosmere. The series is told from the point of view of a magic young man who now owns a tavern but is telling a tale of a time before when he was growing up, exploring the world, and learning the extent of his power. It is a solid option for fans of Sanderson’s expansive high fantasy worlds.

I do hope this list of authors like Brandon Sanderson helps you find your next great sci-fi/fantasy read. Brandon Sanderson’s books release like clockwork and provide more and more material in his growing worlds.