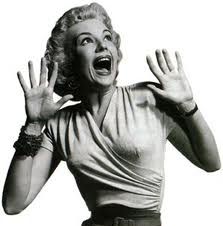 In the first half of this month, the Young Adult Internet Book World at times resembled a low budget horror movie. It was the virtual version of masked strangers revving up chainsaws in the rain and unarmed teenagers searching frantically through kitchen drawers for steak knives to use in self-defense. The conflicts arose between several young adult authors/agents and the bloggers that review their work on Goodreads and personal websites. In this conflict authors saw themselves as unarmed teenagers with the bloggers behind the chainsaw; flip the equation and you have the bloggers’ perspective. The authors and their representation cried foul over negative reviews they felt were unprofessional attacks; the bloggers involved maintained their right to present their personal opinions on their personal websites and accounts however they saw fit.

I am not a part of the Young Adult Internet Book World, but I am a citizen of other planets in the Internet Book Solar System, including of course, the multi-ringed celestial body Book Riot. For me, being a part of these communities is more fun than Disneyland and Disney World combined. I love reading my book friends’ reviews. I love talking to my book friends on Twitter. Tumblr, Gmail, Skype, Goodreads, there are so many threads that weave us together. We feel like a 21st century tribe. And in so many ways we are. But we are a tribe smack dab in the middle of Times Square on New Year’s Eve. There are people and cameras everywhere. The world is watching. So if we’re wearing loincloths that don’t quite cover up our man and lady bits, if we are in the middle of a sacrificial killing, the world is going to see that.

Of course participants in this month’s interconnected conflicts were hurt. Of course both sides felt unsafe. Of course the internet felt like a horror movie. Have you scrolled through a comments thread lately? The internet IS a horror movie. We feel betrayed when a space that is supposed to be a haven turns out to be a battlefield. But this isn’t the space’s fault. The space was never safe. We have only our false sense of security to blame.

The only solution I see is a solution no one wants to hear. We have little-to-no control in these situations, and we have to accept that. We are not going to turn the internet into a suburban intersection with crosswalks, camera-equipped stoplights, and speed-limits. It’s a jungle out here for anyone that is putting out opinions for public consumption. Build all the Swiss Family Robinson Treehouses you like. That certainly makes the jungle more comfortable. But it doesn’t stop the jungle from being a jungle.

There is one way the internet is not like a horror movie, a post-apocalyptic battlefield, the Brazilian Amazon, and that is this: it takes two to make an Internet War to End All Other Wars. If one side stops fighting, there’s not much more of a fight that can be had. Retaliation is the oxygen these wildfires thrive on. If you don’t want to be in a conflict, don’t take the bait. Don’t react to a review. Don’t react to a reaction of your review. Of course everyone always wants the last word. Just be aware that in these fraught situations, the last word very well could be silence that falls when one party decides it’s not worth fighting with someone she does not know and will likely never meet, gets up, dusts herself off, turns her back on her opponent and gets on with her life.

Kit Steinkellner is a playwright, screenwriter, and creative writing teacher. She also writes about books and reading  at Books Are My Boyfriends. Follow her onTwitter: @BooksAreMyBFs