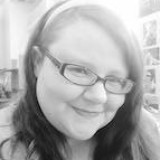 Comics, the Library, and You

The Weird Wild West in Comics