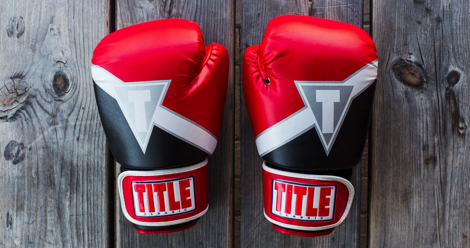 The bell rings, darkness falls. The crowd holds its breath. It’s time for the 2018 Literary Royal Rumble; a unique match that sees two authors begin together in the ring, and a new author added every two minutes. To be eliminated, the author must go over the top rope, and the last author standing is the winner.

Suddenly the music hits and the word “Enid” slides across the jumbotron. Images of ginger beer and picnic baskets flash across the screen, and the crowd cheer wildly to the beat of a jolly good soundtrack. It’s Enid Blyton, and she’s ready for action. Her hair is pinned back, she’s wearing sensible shoes and she’s carrying a sandwich for after she’s done.

She climbs into the ring and waves in a grimly polite sort of fashion to the crowd before turning back to see who she’s going to be faced with. There’s an electric moment of silence before the jumbotron flashes again. It’s Emily Brontë and her introduction package is her staring angrily at the camera before shutting the front door. She marches down to the ring and stares Enid down.

Enid holds up her hands. “I like you,” she says, “I think we have a lot in common.” Emily smiles. The two ladies form an instant alliance based on The Problems Of Being Quite Smart In A World That Can’t Cope With It. They sit down in the middle of the ring and wait for the next person.

But then the jumbotron starts to malfunction. At least that’s what everybody thinks. Letters—SA—appear, before the screen fritzes and turns black. And then it flashes back up to show PPHO before cutting back out. A woman walks out, and down towards the ring. She waves cheerily at Enid and Emily. “Oh, it’s post-modern,” she says, when they ask about the jumbotron, “My name’s Sappho.”

Emily introduces Enid and herself. The three of them form an instant alliance based on The Problems Of Being Quite Smart In A World That Can’t Cope With It. They sit down in the middle of the ring and wait for the next person. Enid offers to make a cup of tea.

The next entrant is Alexandre Dumas, who looks a little concerned at his friendly welcome. He shakes his head as he enters the ring. “This isn’t the sort of adventure I expected,” he says, “I mean, where are the swords? The honour? Not to mention the sturdy Gascon ponies?”

Sappho, Emily and Enid look supremely indifferent. They continue to talk amongst themselves. Alexandre eventually eliminates himself, due to some complicated internal thought processes around the nature of chivalry. As he leaves, he passes the next entrant. “I wish you good tidings,” says Alexandre.

Thomas Hardy looks mildly perplexed at this reference to tidal patterns, but nods and smiles nevertheless. As he enters the ring, Emily waves and asks him to join them. They’re discussing The Problems Of Being Quite Smart In A World That Can’t Cope With It. Enid is teaching Sappho how to knit. Thomas politely refuses (even though he’s always wanted to know how to knit) and starts to write a sonnet about the turnbuckle.

Louisa May Alcott comes out to join them in the ring, and she apologises for her music. “I didn’t want it,” she says, “But my publishers made me.” She glances across at Thomas, who is trying to find a rhyme for “top rope,” and then decides to sit down with Enid, Emily and Sappho. They tell her about their alliance based on The Problems Of Being Quite Smart In A World That Can’t Cope With It. Louisa is well up for that shiz.

The crowd suddenly go wild as a new entrant runs down towards the ring. William Shakespeare stands on the top rope, and waves to the crowd. He rips off his ruff and throws it to a child in the front row. Enid raises her eyebrows. William does a handstand in the middle of the ring.

Mary Shelley calmly strolls out to join them. She watches as William starts to do press-ups. She studies him carefully before rolling up her sleeves and joining in. One-handed.

The music shifts once more; and the screen goes to black and white. An older gentleman strolls out, and studies the action in the ring in front of him. He looks thoughtful. Sappho catches his eye and reads his reluctance. “Feeling chicken, Dickens?” she teases.

Charles Dickens shakes his head elegantly. “I’m more of a serial,” he says, “Don’t give them everything all at once.” He grins at her, and strolls back inside to finish his cup of tea.

Virginia Woolf appears suddenly from under the ring. She climbs in to stand behind Thomas. “Me,” she says, and she pushes him over the top rope.

William Shakespeare collapses in the middle of the ring. Mary Shelley keeps going. A small smile creeps across her face.

J.R.R. Tolkien walks down to join them. He takes so long to get there that Daphne Du Maurier, the next entrant, catches up with him. The two of them engage in small talk. J.R.R. asks if she has any holidays planned. Daphne tells him about how fond she is of Venice. The referee asks if they’re planning to join the match. J.R.R. tells him he’s off to the pub instead, and asks Daphne to join him.

Mary Shelley continues to do her one handed press-ups.

Suddenly the crowd starts to chant the word “Ted” as a young man jogs out from behind the curtain. He lifts his hands up to acknowledge their salute, before bounding down to the ring. His jumbotron says “Theodor Seuss Geisel.”

The jumbotron shifts as though to answer her question. It now reads “Dr. Seuss.”

Ernest Hemingway shakes his head as he walks out to join them. “This isn’t right,” he says, “For one thing it’s going on too long.” He bypasses the ring and goes straight to the announce table. He grabs a mic and starts to berate them for their verbosity.

Emily Brontë and Louisa May Alcott catch each other’s eyes. “I have a brother,” begins Emily. “My parents were transcendentalists,” begins Louisa. The two of them decide to stay in touch after the Rumble.

An announcement is made: “Jack London has had to withdraw from the event due to traffic problems.”

“I wish he’d get the bus every now and then,” says Virginia Woolf, “But no, it’s always the dogs.” She decides to eliminate William Shakespeare who inherently bores her, and form an alliance with Mary Shelley based on The Problems Of Being Quite Smart In A World That Can’t Cope With It. Mary Shelly continues to do her one-handed press-ups as they talk.

The next entrance is rushed out before he’s quite ready. Kenneth Grahame rolls his eyes as he climbs to the top of the ring, brushes his shoes off before he gets in, and ends up talking to Enid Blyton about their work. It is not long before the conversation turns to how best to anthropomorphize a water vole.

Sappho has knitted a surprisingly long scarf. She presents it to D.H. Lawrence as he joins the fray. He looks surprisingly touched, and starts to talk to her about the benefits of a pre-industrialised society. Sappho is not one for mansplaining and pushes him over the top rope.

Charlotte and Anne Brontë follow each other down to the ring. As they arrive, Emily gives both of them a high five and introduces them to Louisa and their alliance. Anne proposes a complicated handshake for The Problems Of Being Quite Smart In A World That Can’t Cope With It alliance. Charlotte is well up for that shiz.

Mary Shelley and Virginia Woolf eliminate Robert Louis Stevenson and Victor Hugo the moment they get into the ring. Beatrix Potter gets a pass because she is a science bro. The three of them bond over how best to reanimate a corpse. “Theoretically,” says Virginia. “Oh yes,” says Mary, “Theoretically.”

C.S. Lewis comes down to the ring. He brings with him Father Christmas, a Yeti, and the Loch Ness monster. He is immediately eliminated for not quite understanding the rules of the match. As he leaves, Dr. Seuss decides to go with him and teach the Loch Ness Monster basic iambic pentameter.

The curtain parts, and Jane Austen walks out to join the match. She’s joined by George Orwell. The two of them join Ernest Hemingway at commentary. George Orwell makes some elaborate metaphor about how the match reflects society. Jane doesn’t laugh.

The penultimate participant, F. Scott Fitzgerald, stands by the side of the ring. He debates out loud whether to get in or not, and what the potential ramifications of his action might be. Virginia Woolf tells him to get in the ring. The moment he does, she sends him back out over the top rope. She fist-bumps Mary Shelley.

Emily Dickinson is the last one to enter the match. She says hello to Beatrix Potter, who holds open the ropes for her to enter the ring. The two of them start to talk, and Beatrix realises that Emily is a fellow science bro. The two of them discuss The Problems Of Being Quite Smart In A World That Can’t Cope With It. They decide to leave and go and break down the walls of patriarchy. Mary Shelley is well up for that shiz. The three of them leave together.

Enid Blyton points out practically that now that all of the participants in the match are in, they have to have a winner. Charlotte, Emily and Anne Brontë eliminate themselves, along with Louisa May Alcott. The four of them set off to launch a club which helps women with The Problems Of Being Quite Smart In A World That Can’t Cope With It. In a fit of solidarity, Jane Austen cuts George Orwell’s and Ernest Hemingway’s mic.

It’s down to Sappho, Virginia Woolf and Enid Blyton. Sappho self-eliminates because she has to be back in time to meet the computer engineer. Her computer failed last night and she doesn’t have a back up. Virginia and Enid wave her off. Enid compliments her on her knitting.

Frustrated at having his mic turned off, George Orwell steals Enid Blyton’s sandwich. Enid self-eliminates by climbing to the top rope and moonsaulting him in revenge. Virginia watches this with amusement before suddenly realising something. She’s won. She celebrates by climbing out of the arena and drop-kicking Ernest Hemingway. Jane Austen commentates superbly throughout.