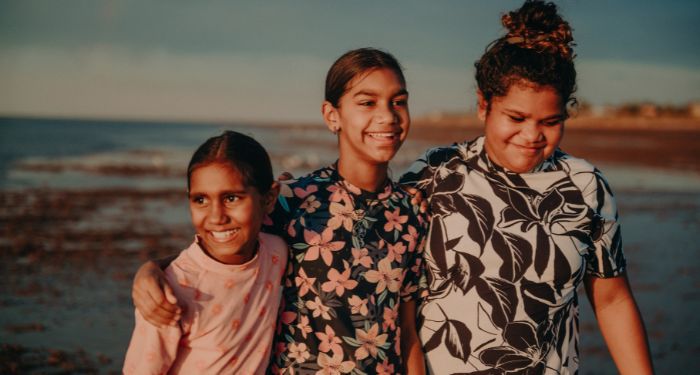 Author’s Note: I acknowledge and pay my respects to the Traditional Custodians of the lands and waters on which I stand; the Cammeraygal People of the Guringai Tribe of the Eora Nation. I pay my respects to all Aboriginal Elders, past, present, and emerging, and extend that respect to all Aboriginal and Torres Strait Islander people who read this article. I acknowledge and respect the vital contribution Indigenous people and cultures have made and still make to the nation we share, Australia, and the literary community.

Shout out to our Aussie readers! *waves* And a special thanks to every Aussie currently facing the barrage of questions about Bluey. It’s okay. We understand. For the non-Australians looking for recommendations for Australian children’s books, I reckon about 80% of you are here because of the animated kids’ show, Bluey; either you are looking for kids’ books like Bluey or something to help you translate the colloquialisms of Bluey. Again, it’s okay. We get it. Truth is, many of us Aussies love Bluey too. Probably more than Steve Irwin or Chris Hemsworth. And it’s a fair rap when you consider how the characters and stories appeal to kids and adults alike. Yeah, I may have watched a few episodes without the kids.

As much as I love Bluey (and I really do), I also know there are a bunch of equally amazing Australian children’s books to encourage and nurture your little tikes. And even if you’re not a fan of Bluey (or possibly have no idea what I’m talking about, to which I say, “WHAT?!?”), the following list is possibly the most ocker Aussie list of books you can ever read. 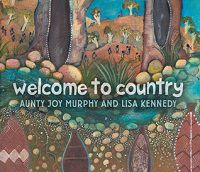 I started this article with an Acknowledgment of Country. It is an opportunity to show respect for Traditional Owners and the ongoing connection of First Nations People to the lands and waters of Australia. In Australia, more people honour our First Nations People with an Acknowledgement of Country or include a Welcome to Country at public events. To be honest, this was not common when I was a kid, and I recognise we still have a long way to go with Reconciliation, but I am so grateful to have books like this to help us learn how to pay our respects. Aunty Joy Murphy has given us a beautiful introduction to the traditional lands of the Wurundjeri People, sharing the traditional words of her people. All Australian children’s books should include an introduction like this. 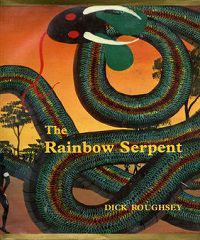 The Rainbow Serpent by Dick Roughsey

The Rainbow Serpent is a Dreaming story, an Aboriginal Creation story told by Roughsey, an Aboriginal Artist from the Lardil language group on Mornington Island in Queensland. Roughsey’s traditional name was Goobalathaldin, and he was a strong and creative advocate for preserving the culture of his people. Each illustration captures Australia’s true colours, from the dusky greens of gum trees to the rich, vibrant red of the ochre. This was possibly my earliest introduction to Indigenous Australian children’s books and remains a favourite. 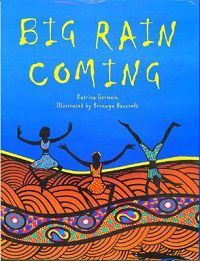 Australia’s outback is known for long dry spells and droughts. It can be hard and damn hot while you’re waiting for the rain. Germaine wrote this picture book while teaching in a remote Aboriginal community in the Northern Territory, and she knows all about the waiting. Her story shares many ways Aussie kids try to cool off while they wait for the Big Rain Coming. I especially love the illustrations from Bancroft, an Indigenous artist who has illustrated many children’s books and always seems to capture the best colours for the Australian landscape. 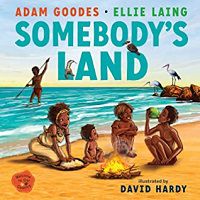 One of the biggest fallacies in world history was the concept of ‘terra nullius’; the idea that Australia was a land belonging to no one before the Brits invaded Australia in the late 18th century. Thankfully, this idea is no longer accepted, and white kids like mine are now learning so much more about the amazing Indigenous culture of Australia. This is aimed firmly at younger kids who may ask about Australia’s history before white people turned up in Sydney Harbour. I love the simple inclusion of everyday activities, showing the simple presence of Australia’s character as a country. 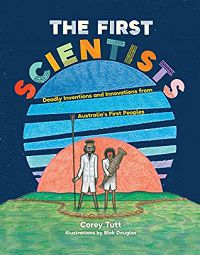 My little family of scientists always asks questions about great discoveries and inventions from Australia. While we have plenty of national pride for puffer jackets, eskies, and wifi (you’re welcome), there is less information available about Indigenous scientific discoveries. When you consider that Australia’s First people have the longest continuing culture on Earth, I really feel like we were missing some key information here. This new book goes a long way to filling that gap and sharing some amazing discoveries across astronomy, engineering, forensic science, chemistry, ecology, and land management. The stories are fun and educational, engaging kids to learn more about science and how we learn. Side note: In the Australian Blak community (Aboriginal and Torres Strait Islanders), the word ‘deadly’ means very cool. 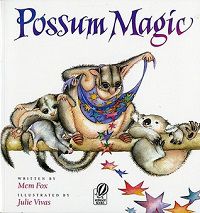 I surveyed 20 people around my kid’s primary school, and this book was top of the list 14 times. It is one of the most loved of all Australian children’s books, and 2022 is the 35th anniversary of its publication. It’s the story of Grandma Poss and the little possum, Hush. Grandma Poss used ‘Possum Magic’ to turn Hush invisible and protect her from the more dangerous wildlife. But now, Hush would like to see herself again. Unfortunately, Grandma Poss doesn’t quite remember how the spell goes. She only remembers it included some Aussie treats. And so begins their great adventure around Australia, trying and testing delectable food like lamingtons and vegemite sandwiches. The artwork is sweet and whimsical, with just enough realism to make the animals and famous locations recognisable.

Diary of a Wombat by Jackie French, illustrated by Bruce Whatley

Like most of the wildlife in Australia, wombats are adorable. Well, they look adorable, but they are actually tanks. Short, fat, tanks. All they do is eat, sleep, and terrorise doormats. It’s all documented in this very accurate diary, filled with very accurate reporting from a very typical wombat (Note: none of this is true). This beautiful book has a very easy-to-read manner, taking a look at the daily life of a wombat and how it might perceive its strange new neighbours: people. Keep an eye out for the sequel: Diary of a Baby Wombat. It’s bloody adorable. 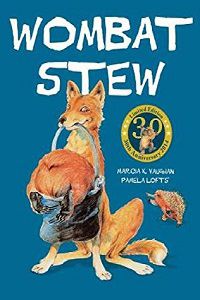 Okay, it might be a bit bad taste to have this straight after Diary of a Wombat. However, we are talking about Australian children’s books — we have a weird sense of humour, and no spoilers, but this book is pretty harmless. In fact, I can’t think of this book without jumping straight into the song. 🎵Wombat stew! Wombat Stew! Gooey, brewery, yummy, chewy, Wombat Stew!🎵 The sheet music is at the back of the book, and I am not sorry if the tune stays with you for days. The song is as ridiculous as the outrageous characters, a bunch of native Australian animals teaming up to help a dingo hellbent on making some wombat stew. Perfect for reading with kids because you can really ham up the voices, including the bogan koala. 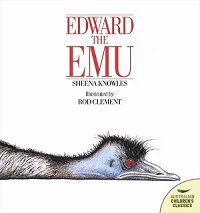 Edward the Emu by Sheena Knowles, illustrated by Rod Clement

Edward, our enchanting protagonist, is a bit sick of the whole emu thing. He doesn’t think he’s getting enough attention at the zoo, so he decides to become a different animal. Unfortunately, a tourist will comment daily on how good the next animal is! It’s a great book for introducing different animals at the zoo but spot-on for depicting our wonderful “big birds” characteristics. 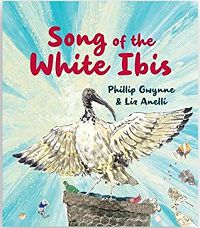 Song of the White Ibis by Phillip Gwynne and Liz Anelli

Many people may not realise this, but the Australian White Ibis has become a cult hero over recent years. It is a native bird originally found in marshes. However, due to development, the ibis has been pushed into our cities and are often seen rummaging through garbage for survival. This led to its more colloquial name, “bin chicken.” Sure, we have laughed, but to be fair, it’s not the bird’s fault. I think that’s why I love this book so much and why it has become an instant hit at my local library. Gwynne and Anelli have taken this overlooked bird and created a gorgeous story filled with history, character, and understanding.

Australian Children’s Books About the Land 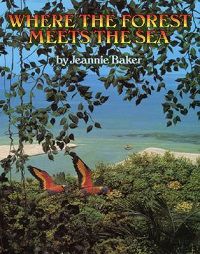 Where the Forest Meets the Sea by Jeannie Baker

This is a visual feast, with vibrant collage illustrations bringing the tropical rainforest of North Queensland straight to you. It’s a journey through time, following the story of a child walking with dad through the rainforest, talking about what it looked like many years ago. The story is short and simple for children and elicits the imagination to think about Nature’s story. Who lived here? What have the trees seen over the year? There is so much to see on each page, just like in the rainforest itself, and I love how that is all wrapped up in an environmental message. Perfect for kids who love landscapes and nature. 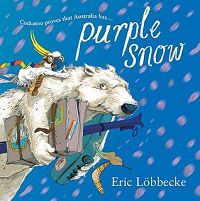 It’s a long way to travel from Australia to the Arctic Circle, but it’s a guaranteed snow holiday. Or at least that’s what Cockatoo thought. Instead, he invites his new friends to come back to Australia and see PURPLE snow. Everyone thinks he’s maybe a little baked in the head? But it’s true! Purple snow is glorious and lovely; it falls just as Australian summer starts. Don’t believe me? Perhaps you should come and visit. Though, this Aussie classic would be cheaper than the air ticket. 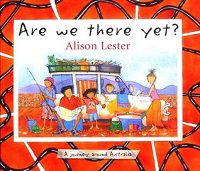 Are We There Yet?: A Journey Around Australia by Alison Lester

There is nothing quite as iconic as the Australian road trip. It’s just… Australia is kinda big. Like, seriously. It’s a big place. And while I love this book, I do think Lester is a little optimistic in thinking it can be done in 3-months. Nevertheless, this book is the ultimate travel guide for seeing the land Down Under, as it follows the family (and their trusty camper trailer) across the country. Pick this up before you pick up the Lonely Planet Guide — I should have included it in my Travel Guide article!

Australian children’s books feel like a niche sub-genre, but our nation is a complex mix of people, wildlife, and landscapes. We’re fascinating and weird and similar in so many different ways. Our children’s books are the same. And if you really did come here looking for Bluey, I hope you found enough books to love Australia just a little bit more.