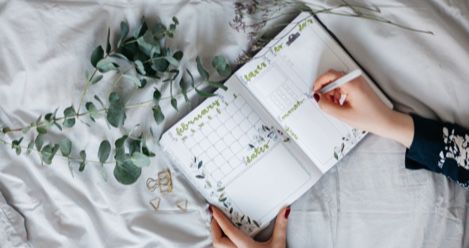 Sometimes a book finds you at just the right time. When I first read Austin Kleon’s Steal Like an Artist, I was in a dark place and needed to find inspiration to DO something with my life. His book helped. I’ve been a huge fan ever since, and his new book, Keep Going, out April 2 from Workman Publishing, is equally great. 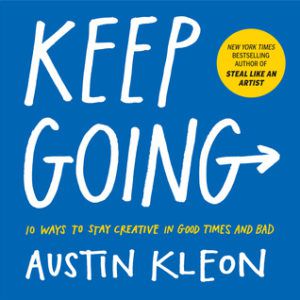 I was lucky enough to pick his brain one afternoon, talking about being creative in a negative political climate, how Henry David Thoreau is extremely millennial, and, of course, books.

Below is a mere snippet of our chat. If you need more Kleon in your life, check out his website for more interviews and talks. He’s brilliant.

What inspired you to put the book together?

Everyone sort of rolls their eyes, but I’ve been really inspired by Thoreau in the past couple of years. I’ve spent the past couple of years reading his journals and one of the things that Thoreau did so well that a lot of writers who keep diaries do well is he was sort of a, for lack of a better word, an iterative writer. He was very much about bits and pieces stuck together over time that then become something better. A lot of his work started in the journals, and he wrote about how he felt like the purest thing would be to just publish the journals and be done with it.

One of the things that hit me after Show Your Work! came out was, How am I going to do this indefinitely? How am I going to build some sort of system in which I’m never out of things to write about? It took me a really long time, but two things happened for me: I realized I have this system where I have a diary that I keep every day. And then about two Octobers ago I started daily blogging again. And that was really the thing that kinda jump-started the book.

I gave a talk in San Francisco last year called How to Keep Going and that did so well with the audience that it immediately became clear that, like, okay, this is the next book. And hopefully it’s the last book in the trilogy.

No, keep making them!

I feel like the square books are done for right now, but you just never know. I thought I was done with Show Your Work!, too, so maybe in a couple more years there will be another one to go in there.

This book really started about two years ago when I watched everyone, all the creative people I know, just kind of lose their minds, collectively.

Yeah, I think the election and our political climate just sucked the oxygen out of every room. And I watched people sort of flailing.

The book attempts to get people to pull out of the daily stream of input. It’s very much about making sure that you have a daily practice in which you go to your creative work that feeds you. But it’s also about taking a very long-term look at what it’s like to make art and do creative work.

But then I also saw this other thing happening, where I think because of burnout—people are talking about burnout and creative burnout and coming around to this idea that creative work is difficult. It’s a long game. It can be hard to sustain over a long time. I really wanted to write a book that took those two things on: I wanted to try to alleviate some of that madness of the day-to-day stream of social media garbage that everyone is wading through, and I also wanted people to open up and think more long-term about this stuff.

The other thing about the book is that, you know, the other books I wrote either for myself in the past, or I wrote for other people, and this was really a book that I needed to read. I count myself as one of those people who was losing their minds.

New on the blog: My year with Thoreau. (Link in profile: @austinkleon)

So you said you’re a big believer in rereading. What’s a book that you come back to a lot?

I’m really into daily reading. I think there’s something really powerful about reading something every day. I love reading Peanuts. I go back to Charles Schulz a lot. I love Lynda Barry, I read her stuff all the time. And I got really into Tove Jansson’s Moomin comics and I’ve been rereading those a lot. If I could have my family be like anyone, I’d have my family be like the Moomins.

What’s the first book that blew your mind?

When I was 13, my parents got divorced and I discovered punk rock and I read, I think within a couple of months of each other, 1984 and Lies My Teacher Told Me. And I read Howard Zinn’s A People’s History of the United States. Every teenager goes through this phase of, like, everyone’s been lying to me and the world is bullshit, but I really, really went through that. And reading those really blew my mind.

What are you hoping people take away from the book?

The greatest compliment anyone gives me after they read my books is I put down your book and I took out my paints and painted. Or I got out my knitting and I made something. Or I went for a walk. I hope people come away from the book and make stuff and trim the noise out of their lives and think about what they really want to spend their time on.