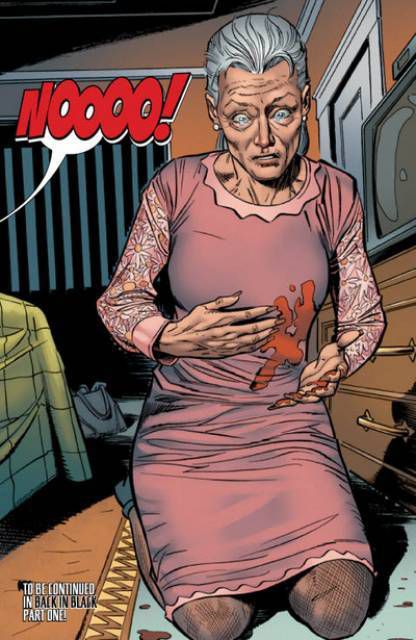 Of Spider-Man’s deep bench of supporting cast members, none has gotten as much hate over the years as his doting Aunt May. She has been the butt of decades of jokes (the Golden Oldie, anyone?), and too many creative teams have acted as if she’s an albatross around Peter’s neck rather than his last living family member. But, here’s the thing: Aunt May is a lot more interesting than people give her credit for. In fact, she’s lived what may have been the most tragic life in comics.

Oh, her life can’t have been that tragic. It’s not like she’s Batman or anything, you say. Well, read on…

1. She Lived through Both World Wars and the Great Depression

If there’s been one constant with Aunt May over the years, it’s that she’s old. Really old. Practically antediluvian.

May first appeared back in 1962, and in her early appearance she doesn’t look that different from how older middle age women were presented in the media. Here she is next to three women gracing television screens in 1962, all of whom were about 60 at the time:

Aunt May (from Amazing Spider-Man #1, art by Steve Ditko), Sylvia Field (Martha Wilson on Dennis the Menace), Francis Bavier (Aunt Bea on The Andy Griffith Show), and Irene Ryan (Granny Moses on The Beverly Hillbillies). Field was born in 1901; Bavier and Ryan in 1902.

May is roughly in the same age bracket, give or take five years. So, we’re looking at somewhere between 55 and 65.

So why does she look so incredibly ancient?

Aunt May’s incredibly tragic life has aged her horribly. Let’s say she was 60 when Amazing Spider-Man started. That would mean she was 15 when the US finally joined World War I. She was 27 when the Great Depression hit. She was 39 when Japan bombed Pearl Harbor. Her late 40s and 50s were lived under constant threat of nuclear annihilation. That shit was incredibly aging, even if you husband wasn’t an Army MP during all those foreign wars. From the time she was a teenager on, Aunt May was under constant fear that her world could fall apart at any moment.

2. Her Love Life Is Super Tragic

But, hey, she had a great love affair with Ben Parker, right? True, but that didn’t exactly end well. And, until recently, May’s love life has been downright cursed.

During the Depression, when she and Ben were on the outs (in no small part because he had to take odd jobs—such as one as a carnival barker on Coney Island—to make ends meet), May got involved with the suave Johnny Jerome. Jerome had Clark Gable good looks and showered May with gifts, like expensive jewelry. He seemed a dream come true, until Ben revealed the truth: Jerome was a gangster, and had stolen the necklace he gave to May.

After that, May and Ben got back together, were eventually married, and were mostly happy together, until he was brutally murdered. But you know what’s worse than having your husband murdered? Feeling like it was all your fault for years after his death. In Amazing Spider-Man vol 2 #38 (written by J. Michael Straczynski and pencils by John Romita, Jr.), May confessed to Peter that Ben was only in the burglar’s way at all because Ben had gone outside after an argument with her. “I never saw him again. If I’d gone out there, if I’d just told him to come inside, all was forgiven, he never would have been there when…” May lived with that guilt every day for a good decade, just as Peter lived with his guilt for not stopping the burglar when he had the chance.

As time passed, though, May let herself fall in love again. A few years after Ben’s death, May got a job as a housekeeper for an older gentlemen who just happened to have four massive metal tentacles growing out of his side. Yup, Aunt May fell in love with and almost married good ol’ Otto Octavius himself. Alas, May’s heart was broken when it turned out Otto had never really loved her at all—it was all a scheme to steal a nuclear power plant in Canada that she had somehow recently inherited. (Suddenly, that time Mary Jane inherited a castle in Scotland doesn’t sound so ridiculous…)

Fast forward a few years, and May meets the second real love of her life, Nathan Lubensky, who moved into May’s home in Forest Hills when she turned it into a boarding house. May and Nathan fell in love, got engaged, and seemed to be genuinely building a new life together. Until the day that Nathan, too, was killed, this time of a heart attack after being taken hostage by the Vulture. Again, death had taken May’s love away from her.

More recently, May has had another chance at happiness with second husband J. Jonah Jameson, Sr. Given May’s track record, though, it’s only a matter of time before JJJ, Sr., turns up dead as well.

3. Almost Everyone Else She Has Ever Loved Has Died, Too

Of course, it’s not just May’s love interests who turn up dead: pretty much everyone May has ever known has died, often in fairly tragic ways. While I’ll not get into May’s complete family tree, three deaths in particular had last effects on May.

During her extended courtship with Ben, May became friends with his younger brother Richard, as well as his girlfriend (and later wife) Mary Fitzpatrick. The four of them were close, though Richard and Mary’s mysterious work for the government frequently took them away for weeks at a time, eventually necessitating them leaving their infant son, Peter, with Ben and May for extended periods. Then, one day, they didn’t come home, and rumors began to circulate that they had been in league with the Red Skull. Years later, Peter would prove that his parents had secretly been double agents working for the CIA, but for about a decade May had to mourn the loss of her friends while raising their son, all the while thinking they had been traitors.

Many years later, Richard and Mary would turn up again out of the blue, raising many conflicted feelings on May’s part. They had been her friends, so she was naturally happy to have them back, but at the same time they were trying to step back into Peter’s life in the parental role she had filled for so long. But then it was revealed that these weren’t the real Richard and Mary, but were instead Life Model Decoys created by the Chameleon at the behest of Harry Osborn. Even if May felt more than a tinge of jealousy toward Richard and Mary, losing them again had to be utterly devastating.

Wait, you ask. You mentioned three deaths… That I did.

4. May Miscarried Her Own Child

Shortly after their wedding, May got pregnant, and she and Ben were ecstatic. Until May miscarried, and was told that another pregnancy could prove fatal. May and Ben both took the news with stride, but it can’t have been easy having Richard and Mary constantly dropping their kid off on the doorstep with a moment’s notice.

5. Peter Is a Constant Disappointment

To make matters worse, though, Peter is pretty much the least reliable person in the history of comics. He genuinely loves May, but he’s absolutely terrible about returning her phone calls or showing up when they have plans. I mean, he somehow missed the fact that she was marrying Doctor Octopus until the wedding. But, May has learned to accept it that’s just how Peter is, and at least he’s applying himself. Oh, wait, he’s not. In one notable instance, Peter dropped out of grad school without telling her, leading to an extended estrangement between the two. More recently, he promised May that he would stop working with Spider-Man after he broke bad in Superior Spider-Man, only for it to come out in the end that he had been secretly providing Spidey with all of his tech. But, despite it all, May still deeply loves Peter, even if he somehow manages to disappoint her constantly.

I defy you to tell me Ellie and Carl do not look exactly like May and Ben.

Aunt May is basically living the life of Ellie, from an alternate universe Up, where Carl died instead of her, and where she inherited a relative’s kid instead of finding Russell under the porch. Except that at the end where it looks like she’s getting her life back together, her new fiancé turns out to be Doctor Octopus, and then her fiancé after that is murdered by the Vulture.

Are you crying yet?

I told you her life was tragic.