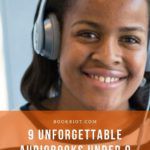 A whole lot of audiobooks fall in the 9–12 hour range, so finding audiobooks under nine hours isn’t as tricky as finding much shorter audiobooks. But that also means that you’ve got a ton of choices. I don’t know about you, but I always take length into consideration when selecting my next listen. Sometimes I’m in the mood for a short listen and sometimes I want to commit to an audiobook for many, many hours.

If you’re looking for audiobooks under nine hours but you’re having trouble deciding what kind of book you feel like reading, here are nine ideas. We’ve got memoir, essays, nonfiction, historical fiction, literary fiction, true crime, fantasy, and one of my favorite YA novels ever. They’re all great books in different ways, and they’re all brilliantly narrated. 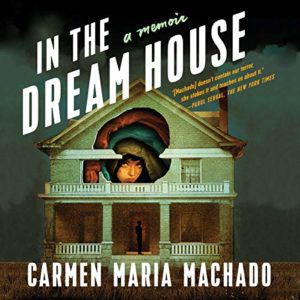 I read this book in print, and I was so utterly wowed by it that I then reread it on audio a few months later. In a memoir that defies categorization, Machado tells the harrowing story of her relationship with an abusive girlfriend while in grad school. It’s an intimate personal story, but Machado also zooms outward, looking at domestic abuse in queer and same-sex relationships, the silence around it, and the ways we do and do not talk about queerness in larger conversations about gender and power. Hearing her read her own words is painful and revelatory. It only drives home how vulnerable Machado is willing to be in this book, and what a gift that is for the rest of us. 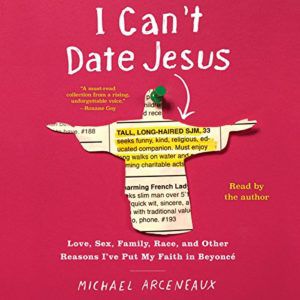 In these funny and engaging essays, Arceneaux gets into all the complexities of his experiences as a black gay man. He writes about dating, family, faith, growing up in Texas, his relationship with his father—all the ordinary things that make up a life. He strikes the perfect balance between laugh-out-loud funny and critical analysis. His voice is warm and low key, but also direct: he’s not fooling, and though this book is full of jokes, his narration also carries all the seriousness of what he he has to say. 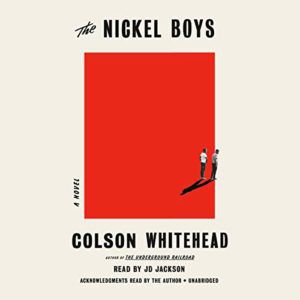 JD Jackson is one of my favorite narrators, and Colson Whitehead is always brilliant, so I was expecting greatness when I picked up this audiobook, and I was not disappointed. Elwood is a teenager in the 1960s preparing to go to college when he gets sent instead to a truly horrific reform school (read: prison for boys). The novel bears witness to the atrocities that went on there, and the ways in which institutionalized racism and violence create lasting trauma in everyone they touch. It is harrowing, and so is Jackson’s narration; it’s a book you want to look away from, but can’t. 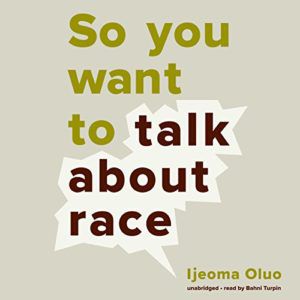 So You Want to Talk About Race by Ijeoma Oluo, read by Bahni Turpin (7 hours, 41 minutes)

If you’re looking for a place to start to learn about the history of American racism, how to talk about it, and how to take real action against white supremacy in your own life, this is a fantastic book. Oluo’s writing is direct and accessible. She tackles big issues, but she breaks them down so they’re not overwhelming. She uses personal stories to keep the book moving, brilliantly weaving her own experiences into larger conversations about systemic racism and how we talk about it. The audiobook bonus: Bahni Turpin is perfect at everything she narrates, and this book is no exception.

What Doesn’t Kill You Makes You Blacker 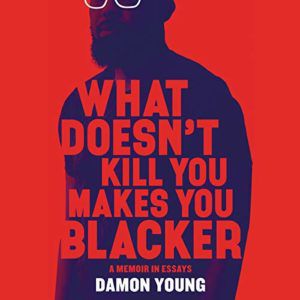 In this memoir-in-essays, Young writes with humor and depth about the question of how to exist as a black man in America. While he uses humor to great effect, the heart of these essays is a serious exploration of race, family, masculinity, and sexuality. His narration is stellar; he’s got a voice that immediately draws you in. He speaks with a combination of gravitas and friendliness that exactly matches the tone of his essays: they’re personal and funny but also engage critically with big, complex topics.

A Kind of Freedom

Spanning 70 years, this novel follows three generations of one black family in New Orleans: Evelyn, a Creole woman coming of age during World War II; her daughter Jackie, a single mother in the 1980s; and her grandson T.J., a man trying to survive in the wake of Hurricane Katrina. Each of these characters is beautifully drawn, as we see them in the moments of deepest emotional intensity throughout their lives. Three talented narrators do Wilkerson’s characters the justice they deserve, capturing all their specific and messy humanity in their voices. 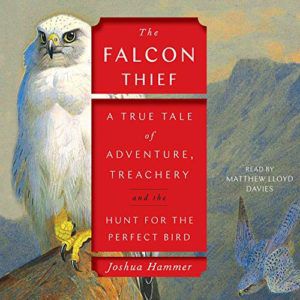 This is a truly wacky store about rare egg theft. As in, it’s a true crime story about a man who spent years stealing eggs from rare bird species in the wild, and then smuggling them across various continents for profit and thrills. If you love nonviolent true crime, this is a great one, full of fascinating tidbits about the history of falconry, wildlife conservation and crime, and oology. Matthew Lloyd Davies does a great job with his upbeat narration; it’ll have you on the edge of your seat. 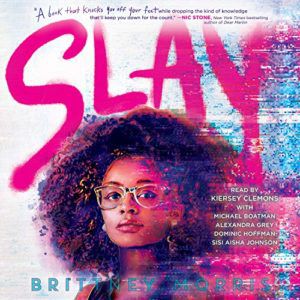 Seventeen year-old Kiera is an excellent student and all around reliable daughter, sister, and friend. She’s also one of the few black kids at her high school. She’s also, secretly, the designer of a popular multiplayer online role-playing game, SLAY, in which players use cards that celebrate black history and culture to duel each other. When a teenager in real life is murdered due to a dispute in the game, Kiera suddenly finds herself in the spotlight. This book has some of the best world-building I’ve read in a while, and the narration is out-of-control good. Kiersey Clemons is so brilliant that I had trouble believing it wasn’t Kiera herself narrating the book. Additional narrators voice a diverse group of characters who play SLAY. Their voices bring the game alive in a way that drives home just how impactful and meaningful it is for so many people. 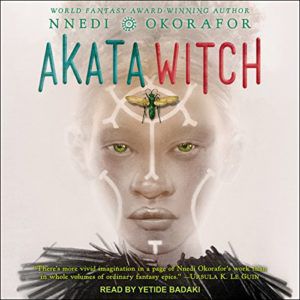 Twelve-year-old Sunny is living in Nigeria and just wants to be able to play football and make friends at school. But when her two new friends introduce her to the world of the Leopard People, she discovers a whole new realm of magic to explore. The world-building and magic in this book, inspired by Nigerian mythology and religion, is wonderfully creative and engrossing, as are the adventures in magical education. Narrator Yetide Badaki brings all the magic to life, as well as adeptly voicing a wide range of Nigerian and American accents.