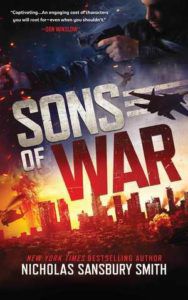 Audiobook read by Ray Porter. Out of the embers, a lawless new empire will rise... The first book in New York Times bestselling author Nicholas Sansbury Smith’s gritty new series following the Moretti Neapolitan crime family's rise to power in a postapocalyptic Los Angeles, and the brave few that risk everything to stop them from destroying what little remains of the city. "Nicholas Sansbury Smith's captivating new postapocalyptic mobster series starts with a daringly original, high-octane bang. An engaging cast of characters you will root for—even when you shouldn't." — Don Winslow

My relationship with audiobooks began when I was a little girl haunted by nightmares and terrified to fall asleep. After trying just about everything else, my mom realized that if she told me a story, I would eventually fall peacefully asleep. To make things easier, she set up a tape deck in my room and bought me children’s radio shows and dramatizations of classic novels. From then on, I always had my tape deck nearby to help me drift off to comforting stories like Little Women or A Christmas Carol.

In elementary school, I switched from radio dramas to audiobooks. I had always struggled to read, but in middle school, a doctor explained to my parents I had chronic daily headaches and migraines. I wasn’t a slow reader; reading was difficult for me because it made my migraines worse. Since I couldn’t read all the books I wanted to in print, my mom upgraded my tape deck to include a CD player and took me to the audiobook section of our local library. A whole new world of audiobooks opened up to me, and I listened to everything I could get my hands on.

But before I knew it, I had exhausted our little library’s stock of audiobooks and started looking for ways to get my hands on new stories. Since there wasn’t a bookstore in my little Appalachian town, I had to wait until the next time we made the hour drive to the mall in the next state over. When we finally got there, I headed straight into Borders and inspected their tiny audiobook selection, but most titles were at least $40, far outside my family’s price range.

After a little more searching, I discovered audiobooks had made their way online. While other kids were on LimeWire downloading Avril Lavigne’s latest album, I was downloading the Harry Potter audiobooks and losing myself in Jim Dale’s performance. A friend of my parents learned that I loved audiobooks and told me about this new website called Audible. Every month he’d burn his latest audiobook to CDs and let me borrow them. Sometimes I’d make copies of his CDs before giving them back so I could re-listen to my favorite audiobooks over and over again.

When I was a teenager, my public library announced that they would have a new digital catalogue called Overdrive where patrons could download audiobooks to their computers at home. I sat in front of the computer and combed through every entry in the online catalog. “What technology!” I marveled.

Since then, a lot has changed about how I find and listen to audiobooks. But no matter the process or format, audiobooks have always been there for me—through the horrors of puberty, being bullied in junior high, and discovering that my migraines were just one small part of a more serious disabling chronic illness. When the world became too much, I dropped in an audiobook on CD or pulled out my phone and hit “play,” losing myself in a new world that always seemed better than my own.

My migraines are now worse than they were when I was a kid, and I still struggle to read print with any consistency. But as an adult, I have access to more affordable audiobooks than ever before. Instead of popping in a cassette tape or CD, I keep at least a dozen audiobook apps on my phone, including audiobook champions like Libro.fm, Overdrive, and Hoopla. As a kid, I couldn’t have imagined having access to this many options. I’m no longer limited to whatever stories are available. Now, I have choices.

I currently work in the book industry and listen to over 150 audiobooks a year. Without the recent advances in audiobooks, I wouldn’t have been able to finish my education and work in the field I do. Audiobooks have never been more popular, giving the average reader a whole new way of experiencing literature. But for people like me, audiobooks are more than just a convenient way to sneak in more reading time while folding the laundry or walking the dog. I’ll be forever grateful to everyone—librarians, teachers, and of course my parents—who helped me find a way to follow my passion, despite the obstacles. They understood that to those of us who read with our ears instead of our eyes, audiobooks are a matter of accessibility, and books should be available to us all.