Like about five million other people, I am hooked on Serial, a podcast from This American Life exploring the 1999 murder of a high school senior in Baltimore. The girls’ ex-boyfriend was convicted of the crime and has spent the last 15 years in jail. Each week, journalist Sarah Koenig has looked at a different aspect of the case to try and figure out what happened with this story.

Although the last episode of the season aired on Thursday, I have to admit that I haven’t finished the podcast yet – the boyfriend and I are saving the last five episodes for our drive to my parents’ house for Christmas. But if you’ve already finished Serial and are looking for more true crime, I’ve got four books to suggest. 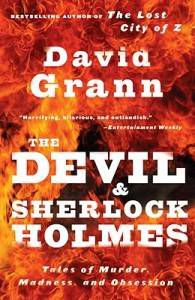 The Devil and Sherlock Holmes by David Grann

David Grann is one of my favorite narrative nonfiction writers. While he’s probably best known for his book The Lost City of Z (also great on audio book), he’s also a talented essayist. The Devil and Sherlock Holmes: Tales of Murder, Madness and Obsession is a collection of his essays that range pretty widely, with a heavy dose of true crime and murder. Because the essays were previously published, some feel a little bit shoehorned into the overall theme of the book. But if you ignore that, this collection will definitely scratch your itch for podcast-length true crime stories and other strange topics like civil engineering and giant squids. 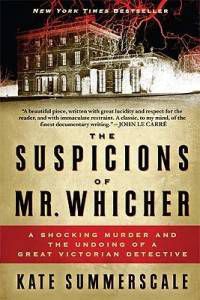 The Suspicions of Mr. Whicher is the story of the murder of an English three-year-old in 1860. The murder was an obsession throughout the country, and led to many people becoming curious about what it meant to be a detective – and destroying the career of a detective in the process. Like Serial, this book gets into the story of how a case was explored and how evidence can be twisted to tell different stories. Although I haven’t listened to this one, the fact that it’s narrated by the amazing Simon Vance means it’ll be great on audio. 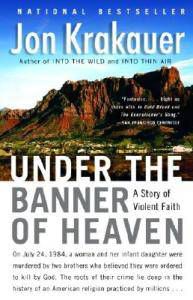 Under the Banner of Heaven by Jon Krakauer

Jon Krakauer has a talent for picking out truly fascinating stories. In Under the Banner of Heaven, he takes on two narratives – the history of the Church of Jesus Christ of Latter-day Saints (Mormons!) and a sensational murder committed by two fundamentalist Mormon brothers. While parts of this book are grisly, overall I think it’s an effective look at religious belief and the ways it can be perverted to justify certain actions. And a bonus recommendation – If you just want a stellar audio book, check out another Krakauer book,  Into Thin Air. I actually screamed out loud in my car listening to that one. 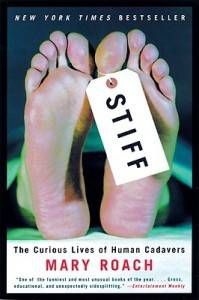 One of the things that I like about Serial is that even though it’s a serious case, Sarah Koenig isn’t afraid to let some of the humorous aspects of this story come out in her reporting – I’m thinking particularly of the story about Mr. S, but also about reading parts of Hae’s diary and just generally how strange teenagers can be. Stiff isn’t technically true crime, but it is awfully funny about crime. In the book, science writer Mary Roach looks at what happens to our bodies after we die, especially if we donate our bodies to science. It’s gross, but also strange and very funny.