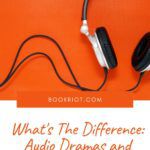 Over the years, audiobooks have become increasingly popular. They are an interactive, accessible way to enjoy and read books on the go. Most public libraries have multiple ways to borrow audiobooks digitally, as well as hard copies on disk. Before audiobooks were readily available, audio dramas or radio plays were more common.

Radio plays made their first appearances in the late 1920s. Soap operas began as radio shows, and even Superman began as a popular after-dinner radio show. Serials made listeners gather together to catch up on their favorite characters week after week. As we’ve moved away from radio plays, audio dramas have become a special treat, often as adaptations of books or popular films. Audio dramas are often available to download or purchase after they’ve aired. Audio dramas usually feature a full cast of actors, providing voices for each character. Full cast audiobooks also feature one voice actor per character, so what sets a full cast audiobook apart from an audio drama?

To begin with, audiobooks and audio dramas are structured completely different. A full cast audiobook is simply the text of a book broken down for a cast of actors, rather than a singular narrator. Most of the time, full cast audiobooks are not abridged, apart from the removal of things like “John said” and “Sally sighed” as these will be acted out. Everything else in the main narrative of the book is kept intact, and is usually read by the same actor who provides the voice for the protagonist. Full cast audiobooks might have more sound effects and music than standard audiobooks, but not as much as audio dramas.

Audio dramas are scripted specifically to be listened to. Since there is no extraneous narrative, music and sound effects are there to enhance the listening experience. Like stage plays, a radio drama’s most important feature is the spoken dialogue. Unlike stage plays, there is no visual to rely on to help tell the story. Foley, or sound effects, are a large part of the audio drama experience. In the early days of radio drama, it was common for foley to be done live alongside the actors. Foley stations include things like shoes, gravel in a box, metal tubes, coconut shells, sheets of thin metal or plastic, and rice in a bottle, with microphones to record it all. Today, sound effects are usually recorded separately, or are digitally created.

When recording a full cast audiobook, voice actors usually record their parts separately. Their recorded pieces are put together by the production company, to ensure that everyone’s best take is in the final audiobook. Voice actors who work on audiobooks can record their parts from home if they have a home studio. Audio dramas are often recorded in group sessions, just as they were in the golden age of radio. This is to help retain the vibrancy of their performance. Sometimes, audio dramas are performed in front of a live audience, either to be recorded or as an alternative to a standard stage play.

Audio dramas, on the other hand, can be released in a variety of different ways. Although audio dramas have fallen somewhat out of fashion, they have risen back up in the form of the podcast. Much like in the old days, podcast audio dramas are serialized, releasing one segment at a time, leaving listeners wanting more. Audio dramas on the public radio release on their own schedules, depending on the station or network. Shorter audio dramas may release all at once. Audio dramas produced by BBC Radio, like Neil Gaiman’s Neverwhere, are usually available later for purchase or streaming for those of us stateside. The release schedule of an audio drama depends on the format, the production company, and the audience.

Have you listened to any full cast audiobooks recently or read any books that would make a good audio drama? What do you think makes a good audio drama?  Learn about the history of radio drama in this post. Visit our Audiobook Archives for more audiobook info and listening suggestions.