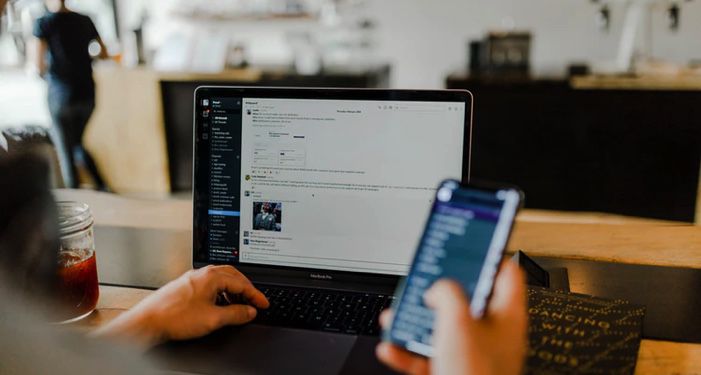 Academics coined the term attention economy to describe the development of various forces of capitalism attempting to take over our thoughts. The terms “attention economy” and “economics of attention” came into play in the 1990s from the theorist Thomas H. Davenport and Michael Goldhaber. However, the concept was present in academic minds as early as the 1970s — many theorists saw the rapid growth of advertising and entertainment and how it needed our eyes to thrive. Instead of a material-based economy, information and the ability to capture consumers’ attention for that information dominates the economy.

You can see the attention economy in practice on websites, podcasts, and streaming services. Websites use slideshows, pictures, and various visual stimulants to keep you on their pages for longer. This means they can quote higher impression rates to advertisers. Podcast advertisements dig deeper into the attention economy: They capitalize on the parasocial relationship that listeners feel with the host. If you like paying attention to Malcolm Gladwell’s writing and podcasts, you’re more likely to take his word about Blue Apron.

Streaming services like Netflix make determinations about how to renew shows based on the viewership in relation to the cost to produce another season of the series. It also seems that Netflix makes the decision to cancel certain shows based on show finish rate. If people aren’t watching all the way through, there is no point to keep the show going because it’s not keeping people on the website for long periods of time.

Although we have more information available to us than ever before, we as humans tragically have the same amount of attention that we’ve always had. The major negative effect of the attention economy is that many people feel they are running behind, constantly exhausted by the news, or stuck in an endless cycle of doomscrolling. The way many websites and news outlets suggest dealing with the demands of the attention economy is by finding a service to help you redirect your attention to meditation. However, apps like HeadSpace or Calm make their money through your continued attention. When you’re learning about the attention economy, the best books that propose a way out tend to suggest paying attention to the things in your life that are already there.

Defining the Problem of the Attention Economy 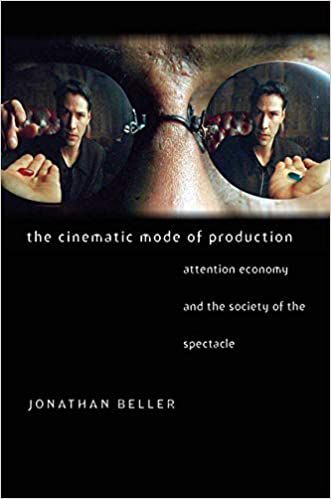 The Cinematic Mode of Production: Attention Economy and the Society of the Spectacle by Jonathan Beller

Jonathan Beller (one of the professors from the Media Studies graduate program I attended) gets a lot of deserved credit for inscribing the terms of the attention economy within Marxist theory. In his book, he argues that the entertainment and the subject are both commodities. As consumers of entertainment vended by the attention economy, we turn ourselves into commodities that production companies or content creators “sell” to advertisers. Beller wrote about how the entertainment we consumed during leisure time had turned into attention labor. Although this book came out in 2006, this is still true in how we engage with social media and entertainment during our “non-work” time. Influencers would be nothing without audiences to influence. Although Beller is an extremely complex writer, his book is a great place to start because he cites and breaks down so many Marxist and labor theorists to bolster his argument. 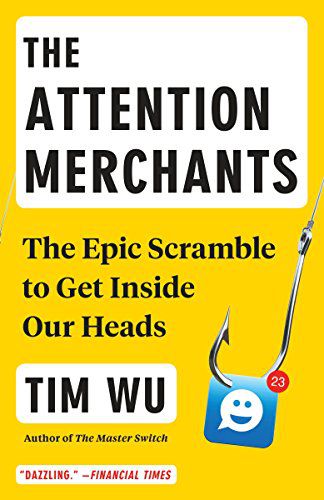 The Attention Merchants: The Epic Scramble to Get Inside Our Heads by Tim Wu

Tim Wu is an attorney and policy advocate who has worked on antitrust lawsuits, coined the term “net neutrality,” and has served on the National Economic Council in both the Obama and Biden administrations. He takes a socio-historical approach to the business of advertising, starting in the early 19th century, and how it developed into the hyper-competitive moment we’re in today. He presents many different forms of media as part of the attention economy (and responsible for where we are today), from war propaganda to soap operas and to the super-saturated online media space we live with today. He is not an optimist about tech and its possibilities, so this book presents the history alongside Wu’s belief that the internet will not set us free from the dangers of the attention economy. 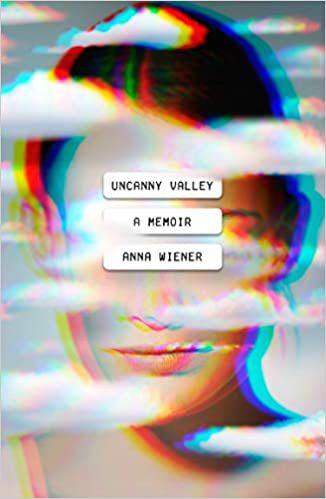 If you want an insider’s view into how everything got so attention-focused, Anna Wiener’s memoir is an honest and compelling account of her time in Silicon Valley during the early days of many companies’ rise to prominence. She recounts the ways so many tech companies have focused on an addiction model: even if we want to “quit” the internet, we can’t because it dominates so much of our work and social lives. The websites we use to communicate are not just tools: they were shaped by humans who had ambitions and ideologies. It’s important to understand that all websites are subject to human bias, which leads to algorithmic bias. This meditation on the attention economy asks us to refocus on the means of production. Nothing is neutral. 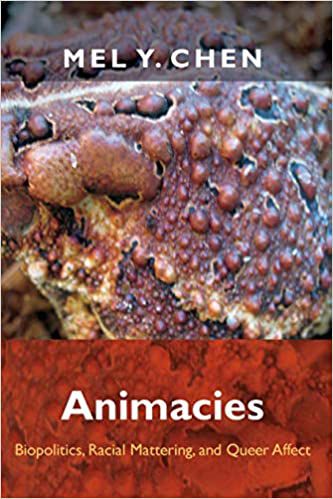 Animacies is not strictly categorized as a work addressing the attention economy, but I think it fits within the genre because of how Chen uses historical anecdotes about entertainment and advertising to reveal deeply-held societal ideals about race, gender, disability, and the divide between living and dying. Animacy as an academic term refers to sentience and agency. By applying animacy to various “non-living” things, Chen asks us to pay attention to their modes of creation and how biases about certain people and images are communicated through imagery and language. This is another complex yet rewarding read. 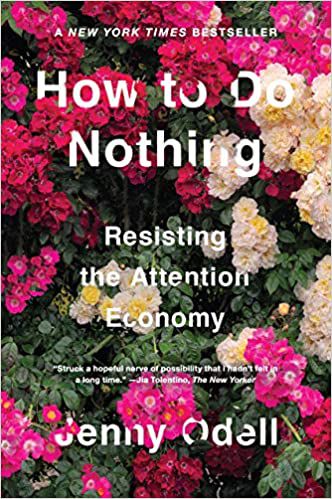 How to Do Nothing: Resisting the Attention Economy by Jenny Oddell

Jenny Oddell has gotten a ton of attention for her breakdown of the attention economy and suggestions for how to fight against it, and it is well-deserved. Although it could have fallen into the personal development/wellness category of book that directs its readers to just “take time off” from screens, Odell has a more ambitious project. She is an artist who seeks to reveal the mundane and help people understand why community space is so important. Much of her book is devoted to the importance of looking around where you live and understanding how you can help. This is not a shame-based approach to trying to exit the attention economy, but a call for resisting the life-dominating totality of addictive technology. 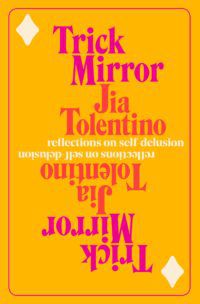 A couple of years ago, every time I stepped onto the subway, someone was reading Trick Mirror. Jia Tolentino’s New Yorker articles gained prominence for addressing very specific parts of internet culture with humor and expertise, and her book expands on some of those topics while documenting her experience growing up during a tumultuous time for technology and entertainment. Through writing about experiences like going on a reality show or getting obsessed with barre classes, Tolentino analyzes why she was invested in these things and also how they became cultural forces around her. She has the rare ability to write about the trials of contemporary society without descending too far into nihilism. 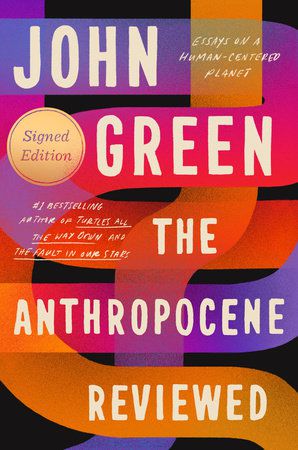 The Anthropocene Reviewed: Essays on a Human-Centered Planet by John Green

To me, John Green’s podcast that inspired this book is a method of resisting the attention economy. Each chapter in this quasi-memoir starts with an item or a concept or a living being and goes back into the history of how it came to be, with a rating out of five stars. This collection came together partially because of a health event in Green’s life, which forced him to sit alone with his thoughts during recovery. So much of our time these days is spent avoiding being alone with our thoughts. The experience of boredom is what the attention economy seeks to dispel. Whenever you’re looking at something, there is another thing grabbing for your eyes. The Anthropocene Reviewed takes the time to meditate on various things that can’t necessarily be monetized by the attention economy.

Instead of seeing ourselves as commodities, many of these books ask us to reinstantiate deliberate meaning in how we pay attention. Our brains and their ability to process information is actually precious. We only have so much time in which to engage with the world around us, so we might as well try to focus on the mundane things that carry us through every day.

Some resistance tactics to the attention economy that we’ve discussed before are reading less and being less productive. In general, consuming less can help you refocus and have deeper relationships to what you already have around you.