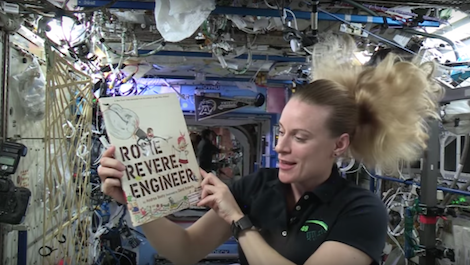 Critical Linking is sponsored by The Myth of the Nice Girl by Fran Hauser.

If you need to mix up your bedtime story routine a little bit, the Global Space Education Foundation has just the thing for you: Story Time in Space.  It’s exactly what it sounds like — astronauts on various missions in space read popular children’s books while floating about, and the videos are edited and shared with kids way down on Earth.

The Trump book industry remains incredibly lucrative — perhaps, even, at the expense of the rest of book publishing.

This year, The New York Times‘ hardcover nonfiction best-seller list has been topped exclusively by books centering on President Donald Trump. At the top of the list this week is Dear Madam President: An Open Letter to the Women Who Will Run the World, in which former Hillary Clinton communications director Jennifer Palmieri reflects on her campaign’s loss and prescribes a new model of leadership for the Trump era. The three weeks before that, it was Michael Isikoff and David Corn’s Russian Roulette, extensively exploring Trump’s ties to all things Russia. And before that, of course, was the juggernaut Fire & Fury, Michael Wolff’s gossipy White House tell-all which spent a staggering 10 weeks in the No. 1 spot.

Last year, the Illinois Department of Corrections (IDOC) spent $276 on books for its educational programming across 28 correctional facilities, according to data obtained through a Freedom of Information Act request. In comparison, the state prison system spent roughly $750,000 each year on books in the early 2000s. In 2005, spending on books dropped to $264,000. In the last five years, IDOC spent a total of roughly $140,000 on reading materials. That figure represents a 96 percent decrease from what was spent on books between 2000 and 2005.

As an Illinois resident, I find this budget cut not surprising but as a human, I find it appalling.