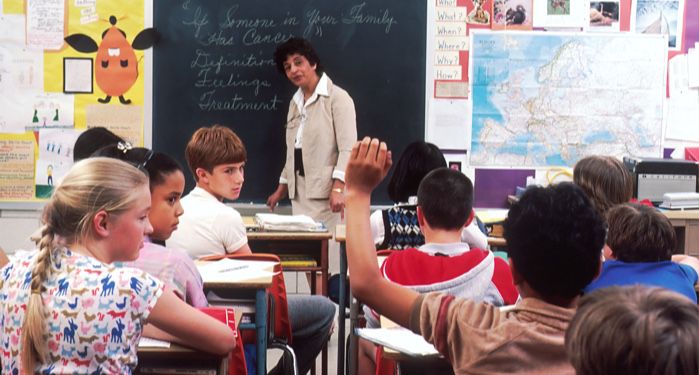 A little background: I studied literature in university. Way back in 2009, I made my first friends in the book blogging world through the Classics Club. I’m part of a Shakespeare book club, and I reread several centuries-old novels once a year. All of this is to say: I love the classics. I think they’re an invaluable window into the souls of those who came before us, and I happily power through 19th century novel after 19th century novel all through autumn and winter.

Having said that, as a teacher who used to work with kids age 13–18, I believe that we should assign more contemporary books and fewer classics to our students.

For the record: I’m not advocating to eliminate all classics from the school curriculum. Far from it. But I do believe that they should be rationed, and we should be working with contemporary books far more often than we do now. Why, you ask? Pull up a chair, grab a coffee, and let’s talk.

They Relate To Them Better

One of the most unexpectedly fruitful days in my career came a few years ago, when I assigned my 13-year-olds a novel about the risks of social media. Honestly? I didn’t actually like that book. I thought it was farfetched, melodramatic, and the writing style grated on my nerves. But I thought it would lead to some interesting discussions, so I added it to the syllabus. I am so grateful that I did.

After they’d had a couple of weeks to read the story, the kids and I sat in a circle on the floor and started discussing the plot. One of the characters in the novel was catfished, and three of the children casually brought up that somebody had tried to catfish them. Thankfully, they realized this before they agreed to meet with what turned out to be a grown man instead of the teenage girl they professed to be. Even more concerning, this person seemed to know details about the school. When that class was over, I marched straight to the principal’s office to give her a heads-up. We were able to be on our guard because I decided to favor a book that I thought the students would relate to over one of the classics that I myself preferred.

It isn’t just about the plot, either. Although classics show how universal human emotions are, they are depicted in a writing and communication style that is, more often than not, foreign to today’s tweens and teens. I’ve been assigned books, when I was in secondary school myself, where the language was enough to put me off of them. A group of 16-year-olds students wound up hating one of my all-time favorite short stories because the language was a lot wordier than they were used to, and I didn’t do a sufficiently good job at making it more accessible.  Do we really want children to end up hating books because we’re constantly forcing them to decipher a communication style that has nothing in common with the way they talk?

They Don’t Have To Put Up With “the Times”

Classics are, by definition, books that have retained their status and readership through the decades. Sometimes centuries. And while so many of them are incredible, a great deal of them perpetuates problematic attitudes and world views. Casual racism, misogyny, homophobia and transphobia…I don’t want my students to feel dehumanized by the books I assign them. And I don’t want them to feel that I consider those things a worthy tradeoff for a passing grade.

Let me very clear: I’m not saying that we should exclude books that make students uncomfortable, period. The way I see it, good literature ought to make you feel uncomfortable sometimes. But there is a difference between a classic like Beloved, where the discomfort is a natural and healthy result of reading about the horrors of slavery and its aftermath, and one like Gone With the Wind, where the existence of happy slaves is presented as something perfectly possible instead of as an inherent oxymoron.

When We Do Teach Classics, Let’s Make Them Accessible

When we do assign classics, let’s make sure to make them accessible for our students. We can’t throw a book at them that was written in a completely different historical and socioeconomic context, and expect them to enjoy it – or at least, not loathe it – unless we put in the work to make the situations and the characters comprehensible (see above: my own failed experience teaching one of my favorite short stories). This is easier said than done, of course, but if we want our students to get all that they can out of these books, it’s necessary.

Looking for resources and books about education? Try these: