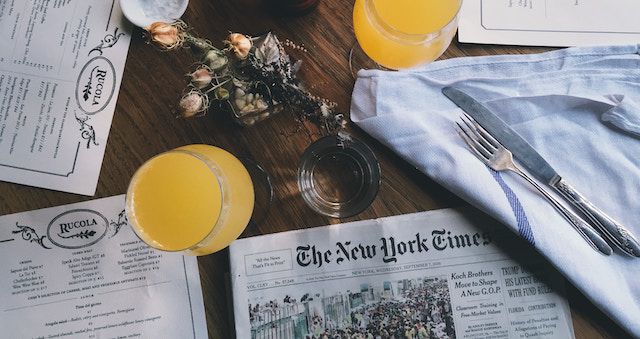 Last week, my ears perked up when I heard about a project involving two of my favorite things: Asian American YA authors and the Sunday edition of a newspaper.

According to the Viewfinders preface by Veronica Chambers and Jeff Giles, each author selected from around six different images. The preface goes on to explain: “After each writer picked the image that captivated her or him most, we asked that they disregard whoever the real people in the photographs were and even the true-life locations if they preferred. We wanted their imagination to be the only engine here. As you will see, the writers took the photos and ran.” 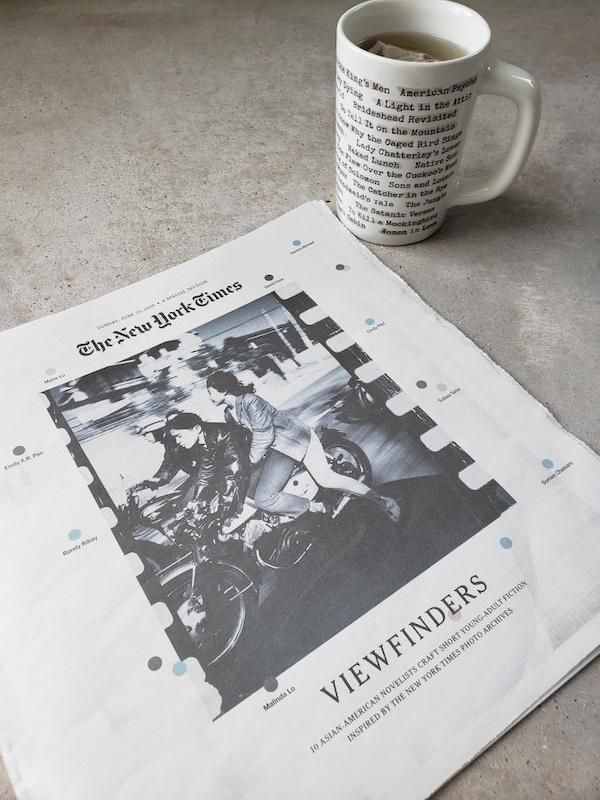 I spent Sunday afternoon devouring the print section from front to back, cup of tea in hand. But of course, that’s not the only way these Asian American YA stories can be read. If you missed the paper edition or you’d rather read them online, you can find the stories and photos that inspired them at New York Times’ site.

And if you’re looking for a sneak peek before you dig in, here’s a list of the authors and a taste of each story:

David Yoon: “Rabbit in the Arcade”

From David Yoon’s story, “Rabbit in the Arcade,” which is inspired by a photograph of three boys playing video games in South Korea during the late eighties:

He preferred the arcade. There, neither Egg nor Fox could see what went on in Rabbit’s head, which Rabbit was also thankful for. Because Rabbit spent most of his time wishing.

Rabbit had wished for so long for things to be different that he didn’t know what it was like not to wish.

Yoon’s first novel, Frankly in Love, comes out in September of this year. Read more about the upcoming novel on Book Riot here and here.

From Marie Lu’s story, “Fourth Sister,” inspired by an image from 1924, showing five Chinese students en route to universities in the United States:

She, of course, never told anyone that she was responsible for these events in their lives. Being the fourth and a girl was misfortune enough. Adding the label of witch, zhu, would surely ostracize their family from the rest of the village. She had seen other girls accused of witchcraft, witnessed them excluded and left unmarried. One girl had been driven out of the village altogether.

Lu is the author of the Young Elites, Legend, and Warcross series. Read more about her work on Book Riot here and here.

From Malinda Lo’s story, “Don’t Speak,” inspired by a photo of The Three Little Pig mascots at Tokyo Disneyland in the mid-nineties.

Inside the pig, she was anonymous; she was no one. Staying silent had never seemed so natural. She experienced her pigness as a void — a black hole that had been stripped of its sucking power and was now simply nothing.

Lo is the author of Ash, A Line in the Dark, and other novels. Read more about her work on Book Riot here and here.

Patting his chest to check for the hidden pocket sewn into his shirt, Babr smiled. He was not the ingenious tailor his wife had been, but he believed she would have been proud of his efforts, even if the money in his pocket had been obtained through deception. For what did this place, established by the British and built in the image of their great universities, stand for but dishonesty?

Ahmed is the author of Love, Hate & Other Filters and Internment. Read more about her work on Book Riot here and here.

From Cindy Pon’s story, “Like Magic,” inspired by a 1975 image of Chinese brush artists in New York City’s Chinatown:

Her teacher made it look so easy, effortless. But Hongyue knew better. She often felt her heart lifting as she painted, her focus only on her creation. But what she intended to express on paper almost never came to fruition as she wanted. Lacking.

Pon is the author of Want, Serpentine, and Silver Phoenix. Read more about her work on Book Riot here and here.

From Randy Ribay’s story, “Laban,” inspired by an image taken outside the Phillipine Mission to the United Nations in Manhattan. On that day, February 25, 1986, a crowd celebrates the fall of Ferdinand E. Marcos:

It’s not that Xavier wasn’t glad. It’s not that he wasn’t relieved. It’s just that he wasn’t very hopeful. As a student of history, he always felt the heaviness of time weighing on his shoulders. He knew that revolutions were fragile things, quick to flight but hollow-boned underfoot. Yes, excitement filled today, but what about those they lost? And what about tomorrow?

PJ always called him a coward when he refused to go to the protests with her, and maybe she’d been right. Even now he couldn’t shake the low-level fear that had followed him across an ocean.

Ribay is the author of Patron Saints of Nothing, After the Shot Drops, and An Infinite Number of Parallel Universes. Read more about Ribay’s work on Book Riot here and listen to the hosts of the Hey YA podcast talk about it here.

From Emily X.R. Pan’s story, “Precious,” inspired by a 1958 photo of people scaring sparrows outside the Summer Palace in Beijing, China:

Did you know the horizon is a seam that opens every 12 years, when the zodiac resets and the pig is eaten by the rat? At dusk the crack becomes a mouth and the mouth gapes wide and winged creatures of every shape ascend into our sky, then descend upon our streets.

This is what I’ve been told by Yima, the aunt who raised me because my parents could not. I don’t even remember what my parents looked like, but Yima — who sings to me as she braids my hair into loops, and cooks me sweet broth with red sugar and ginger when my monthly pains set in — she’s all that I need.

Pan is the author of The Astonishing Color of After. Read more about that debut novel on Book Riot here and here.

Misa Sugiura: “Not What I Meant”

From Misa Sugiura’s story, “Not What I Meant,” inspired by an image of a Tokyo dance hall in the late fifties.

I push through the dancers and the human windshield wipers, and Rosie shoots a look my way that practically freezes my soul. But I keep going because I am a woman on a mission.

Then I’m standing in front of Mari, and she’s looking at me like what do you want?

Sugiura is the author of This Time Will Be Different and It’s Not Like It’s a Secret. Read more about her work on Book Riot here and here.

Sabaa Tahir: “News of the Day”

From Sabaa Tahir’s story, “News of the Day,” inspired by a 1958 photograph of a drugstore in Karachi Pakistan:

The creature’s diminutive stature initially fooled patrons of Aftab Drugstore into thinking it was a mere Ghul, the smaller, less violent cousin of the Jinn.

“Then it grabbed me,” said Farkhanda Aftab, 7, the daughter of the store’s owner, Yousef Aftab. “And it screamed. It felt like knives in my ears. I thought I would die.”

Tahir is the author of the An Ember in the Ashes series. Read more about her work on Book Riot here and here.

From Soman Chainani’s story, “Seen,” inspired by an image from the mid-seventies of fans lining up outside of a movie theater in Bombay, now Mumbai, waiting to see Sholay:

I glance up at her, jostling the remote, the sequins on her jumpsuit a radiant flurry. She bought the jumpsuit at the Dadeland mall a few months ago, the last Sunday I let her take me out. She’d attempted to make me over with Ralph Lauren Polo vests, an Aveda facial and a D&G speedo, before I escaped to the arcade. (“I just want you to be happy with how you look. So you can make friends,” she lamented later. “I have friends,” I shot back. She glared through me and started walking, weighed down by bags. “If Grandpa asks, tell him all these clothes are for you.”)

Chainani is the author of the series, The School for Good and Evil. Read more about Chainani’s work on Book Riot here and here.