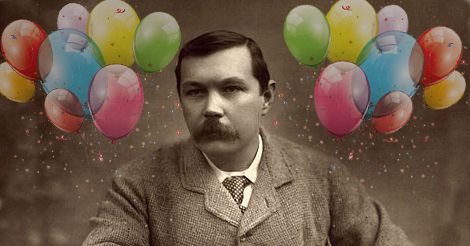 To celebrate the birthday of Arthur Conan Doyle, we’re writing about all things Sherlockian/ACD today. This coverage is sponsored by The 7 ½ Deaths of Evelyn Hardcastle by Stuart Turton.

It’s ACDD! Not to be confused with AC/DC Day—is that a day? Anyhoo, it’s Arthur Conan Doyle Day! We celebrate the birth of Arthur Ignatius Conan Doyle (born on May 22, 1859, in Edinburgh, Scotland) because he created, surely, the most famous detective: Sherlock Holmes. And fictional duo, because everyone knows Watson, too.

You don’t need to have ever read any of Doyle’s novels or short stories to know about the detective with the amazing skill of deduction, because the likelihood that you’ve seen/read an adaptation, reimagining, or “inspired by” character is very high. I mean you’ve certainly made it when a false signature phrase is regularly used in pop culture and attributed to your character even though you never wrote it: “Elementary, My Dear Watson.”

I do often wonder what Doyle would think of specific adaptations or reimaginings of his work. Would he be an Elementary fan? Think the BBC nailed it with Sherlock? Or shake his fists and demand rewrites? Does he agree that Stephen Fry was an excellent choice to narrate the audiobook of his work? And also think Sherry Thomas’s gender-swapped reimaging of the famous Holmes/Watson duo is brilliant? (It is!) At least I like to think he would—or still does, as he was a huge believer in spiritualism. But honestly, he’d probably be too busy focusing on how influential his writing was on an entire genre. (I’m gonna pretend he got over his whole being tired of Sherlock phase.)

Sir Arthur Conan Doyle was actually a very interesting person beyond his creation of Sherlock Holmes: he was a physician and once a ship surgeon; applied his own deductions to a real murder case to try and help a wrongly convicted man; was convinced that Harry Houdini actually had psychic powers—something Houdini denied but Doyle refused to believe. So on Sir Arthur Conan Doyle’s 159th Birthday—that’s a lot of candles!—Rioters’ happy birthday song will be in the form of fantastic, interesting, amusing, and excellent posts for all the mystery fans, Sherlockians, and readers who’ve never dabbled in Doyle’s work—or mysteries—but think maybe now’s as good as time as any. (It is!)

And if you don’t need a specific day to celebrate Sherlock or mysteries, because that’s everyday, we have the Read or Dead podcast and the Unusual Suspects newsletter.

Do you enjoy complex plots, excellent character development, and emotional depth in your mysteries? Then check out some of these great literary mystery novels.

Step Aside, Sherlock! Women Were Cracking Cases in Victorian England, Too

I love what the world has made of Holmes and Watson in recent years. In fact, I love their relationship in all its different forms much more than I love their actual adventures. Eccentric, socially awkward genius. Grounded, capable every man. Both valuable people, but better together than apart.

Quiz: Which Secondary Sherlock Holmes Character Are You?

Which recurring secondary Sherlock Holmes character are you? Take the quiz to find out to find out what role you'd play alongside Holmes and Watson!

Sherlock Holmes or Nero Wolfe: Which Literary Detective Do You Prefer?

A reader confesses an early lack of interest in Arthur Conan Doyle's great detective, and a preference for Rex Stout's Nero Wolfe. So, which is it for you--Sherlock Holmes or Nero Wolfe?

ACD was hardly a feminist, but he did give us a wide range of colorful female characters, from virtuous to villainous and everywhere in between. Here are some of the fascinating women in the Sherlock Holmes canon.

Arthur Conan Doyle, the creator of one of fiction's most logical characters, believed entirely in the existence of fairies.

Looking for the speculative on Baker Street? Reimagine the great detective with these takes on Sherlock Holmes in sci-fi and fantasy.

What goes on in the mind of the world’s greatest detective, anyway? In this article we take a look at theories regarding Sherlock Holmes' mental health.