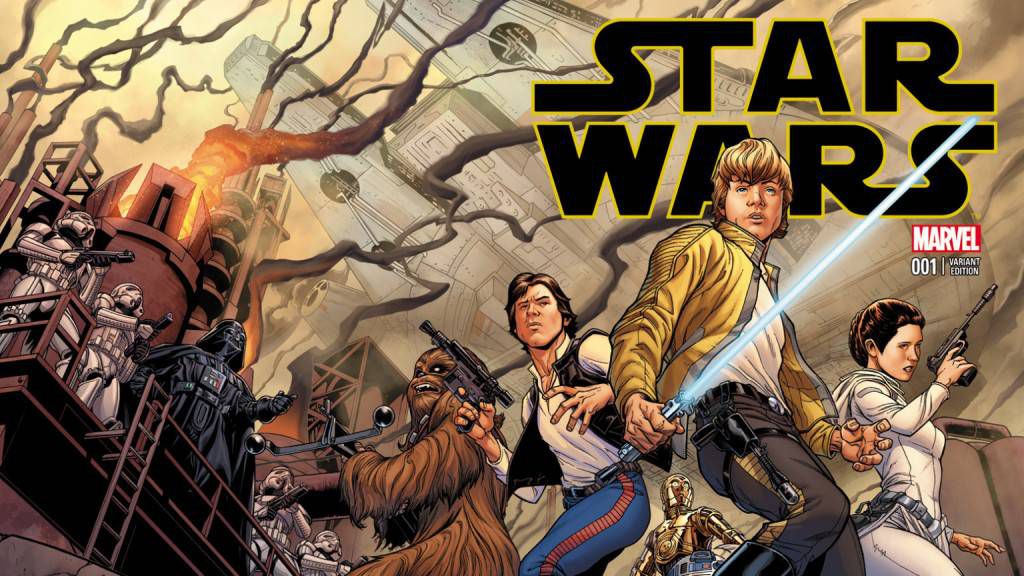 Marvel launched a new book this week, and obscure little sci-fi tale that you…

Oh, who am I kidding? You all know Star Wars #1 came out this week. It’s still a new beginning — a fresh chapter — so it fits my into my mission statement for Art of the Start, but Star Wars is such a multi-generational phenomenon that I’m not going to be looking at this as though you’ve never heard of Star Wars before, but this may just be the first Star Wars COMIC BOOK that you’ve picked up — or are considering picking up.

So, Marvel puts some of its top talent, Jason Aaron and John Cassaday, onto a big, big release. How does it work for Star Wars fans? Let’s dig in.

I’m going to try very hard to avoid spoilers in this review, so bear with me if you’re considering whether or not you should check out this new book.

Right off the bat, I like opening this book. The first page is all black, aside, of course, from that familiar blue lettering: “A long time go, in a galaxy far, far away…”

And then you turn to a double page spread with the Star Wars logo.

This might seem silly. It might even seem like a waste of space in your book. But… I could almost feel the John Williams score blast in my face when I turned that first page. That cinematic moment is so iconic, and while it can’t be replicated in comic books, I feel like this space here at the beginning, it really just invites the reader back to his or her childhood. I think I leaned back in my chair and inadvertently reached for some nonexistent popcorn.

The logo page is followed up by an approximation of the familiar chapter scroll, which presumably gets us up to speed, but honestly I whipped past that because I know this takes place shortly after the end of the original Star Wars film.

How do I know? Because the (John Cassaday) cover has Luke Skywalker in that yellow jacket! The one he dons only at the award ceremony at the end of the first film. And while they’re no real reason to assume that Luke wears the same jacket all the time, this is an easy connection for Star Wars fans.

Anyway, that’s all the set-up we need, and we dive into the action. The first sequence immediately captures the feel of a classic Star Wars gambit, our heroes disguised and on a perilous mission. But I think there are two immediate things that make this sequence work out of the gate:

1) The art. John Cassaday’s art is realistic enough that the characters feel like actual people, and he handles characters like Han, Luke and Leia with enough of a semblance to the actors that I was not thrown out of the story, and in fact I could connect these drawings quite well with my memories of the first film.

But more than just the likenesses and figures, it’s the cinematic storytelling. There are a lot of pages with 3,4, or 5 panels, but they’re most stacked vertically, maintaining a widescreen feel, easy to follow. Even when Cassaday moves into side-by-side panels, I think he chooses his moments wisely, maintaining as much of a cinematic feel as is possible.

Art by John Cassaday with colors by Laura Martin

2) The banter. I’ve got to credit Jason Aaron here — this isn’t some karaoke rendition of a pop classic… this feels like someone’s found a lost recording of the original band with a new set of tracks on it. If you’re on the fence about this book, let me tell you right now: Han Solo’s swagger in the first few pages of this issue put me right at ease.

As the story picks up, we get exactly what we want out of a Star Wars story: our heroes in hot water, shifting plans, and some reveals that are both new and familiar.

I think my favorite bits — and I’m trying really hard not to spoil things here, folks — are moments and set-ups that I’ve NOT seen in a Star Wars book before, but feel like perfect extensions. Chewbacca takes up a role that makes me like Chewie more than I already did — and that’s hard to do. And there’s a suggestion in here that C-3PO take an action you’d never expect from a protocol droid, and… more than any cliffhanger, let’s just say I want to see that particular Chekhov’s gun fired.

(Sorry, that was terrible. But I can’t resist.)

Is there anything I didn’t like about the book? There’s a bit at the beginning where C-3PO offers a little bit of dialog that seemed a little too expository, but… if you’re going to exposit, that’s the right character for the job.

I think Leia gets slightly less time than she deserves here, but this is only a first issue. She seems along for the ride for most of the issue, though she does get one nice moment toward the end of the issue that shows that she has a pretty strong point of view toward things Empire related.

(Note: I may have also noticed this about our favorite princess because the previous incarnation of Star Wars, published by Dark Horse, really pushed Leia into a strong leadership role.)

The book ends with the mission at peril, several members separated from the others, and a familiar threat imminent. Do I want to read the next chapter? Is a nerf herder scruffy looking?

If you’re a Star Wars fan, but you’ve never read a comic book, this may seem shockingly short, but I found it as packed as any great scene from Star Wars, and I think Aaron and Cassaday have made a good case for a comic book continuation of one of the great sci-fi/fantasy touchstones of popular culture.

Did you read Star Wars #1? If so, what did you think? Or, are you on the fence? If so, what, if anything, would push you into buying the book?