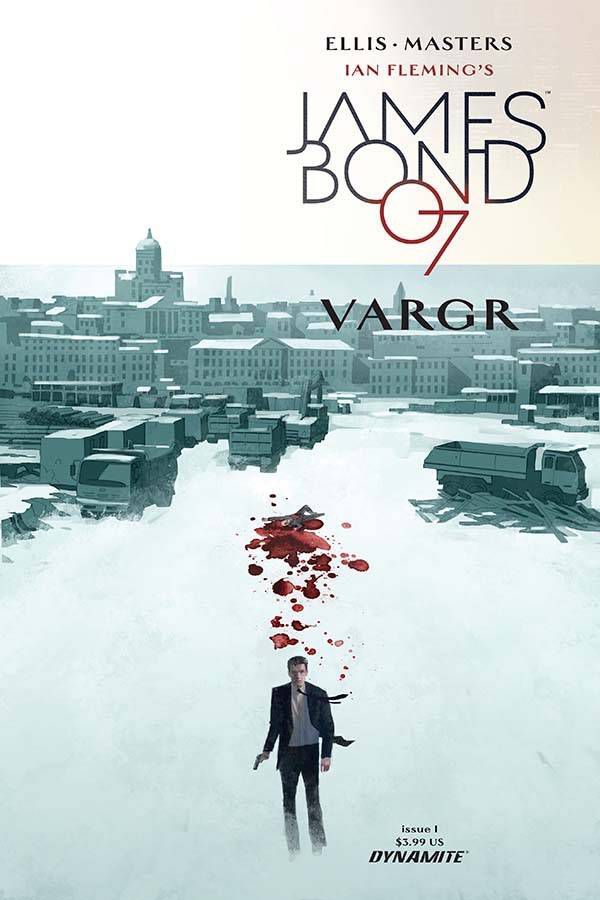 I’m a huge fan of James Bond. From the movies to the books to the video games, I try to never miss a new chapter in the top spy’s story. When it was announced that Warren Ellis would be penning a James Bond story, I was ecstatic. I can’t think of a better marriage of concept and creator. I was especially excited because I felt that Ellis had the right mindset to both update Bond for the 21st Century while still maintaining the feel of the 60s novels. And James Bond really delivers on those expectations.

The issue begins with a incredibly well paced and choreographed chase sequence through an industrial park in Helsinki. It echoes the cold opens of the Bond films while also feeling distinctly like a comic. The action is punchy. Beat by beat, Bond and his target lash out at each other, turn by turn, panel to panel. It’s a silent sequence, playing on the drama. The silence allows Jason Masters’ space to take the lead, setting a tone for the book’s visual storytelling. It’s a simple, straightforward sequence where Bond pursues his quarry, ultimately sparring the bedraggled ruffian with a shovel. It’s a violent exchange – Ellis masterfully letting us know that the spy’s life is fast and dirty in just a few simple panels. Bond finally breaks the silence when he charges his assiliant with the murder of 008. The sequence occurs over six pages, but it neither feels like it short changes the issue nor does it feel rushed. It’s a perfect way to introduce the reader to this character and this world, without wasting any time – especially for one of the more popular cultural figures in the past half century decades.

The issue cuts from Helsinki to a drug den in Brixton for a brief interlude that ties the opening with the larger narrative. We then settle into MI6 headquarters. It’s here that the “Vargr” storyline really begins to take shape, as Bond is rebuked by M – the Minister of MI6 and Bond’s boss – for taking revenge on 008’s killer instead of bringing him in. Questions about the efficacy of the 00 program are being raised and Bond is being reigned in. But there’s still 008’s case to finish, which will see Bond off to Berlin in the next issue.

The James Bond that Warren Ellis delivers successfully balances the broken Bond of the modern film franchise with the heart of the character as a suave spy. He’s ruthless and cold in his role as licensed killer, genial to friends, and disarmingly sarcastic with his colleagues. It’s a full picture in just a few short scenes. Masters’ depiction of Bond falls squarely into Ian Fleming’s mold. He looks like a man pulled from the 60s – a sort of Don Draper flair that hints at Bond’s Scots-Swiss roots. As well, Masters infuses some character to Bond’s body language. He’s square shouldered and bent-kneed when making a killing shot, he shifts in his chair when admonished by M, and he’s brazen when flirting with Moneypenny. Simply put, he’s 007, perfectly encapsulated for the comic page.

We spend a decent amount of time in MI6  headquarters meeting the supporting cast. A brief glimpse of Ms. Moneypenny, Q the Quartermaster and Bill Tanner, Bond’s closest friend. They each help us gain insight into who Ellis’s Bond is. We see his coy humor with Moneypenny, abrasive, adversarial quips with Q and a dose of reality in a lunchtime chat with Tanner. Masters takes a slight middle road on depicting each of these characters, borrowing from the look and feel of the films while never quite dipping into straight duplication. Moneypenny bears a striking resemblance to Naomi Harris from Skyfall and Spectre, Q looks like a more gruff and burly John Cleese, while M and Bill Tanner appear to be totally new interpretations of those characters.

This issue is a great start to the series, and I’m definitely coming back for the next chapter. Much of the overarching plot is not revealed in this issue, though some hints do point to a story about the drug trade across Europe being a center point. Ellis also adds some social conscience to the Bond story, as only he can. Questions about the need for professional killers as spies are raised and never quite answered. Bond is even stripped of his gun while in the UK, which is met with some protests from our errant spy. We’re not just getting a modern take on Bond, but a modern Bond story that is written to reflect the themes of our day and not just updating the Cold War for 2015.

Pour yourself a Vesper Martini, set your James Bond theme playlist to repeat and check out the first issue.

The suggested way to enjoy the issue.