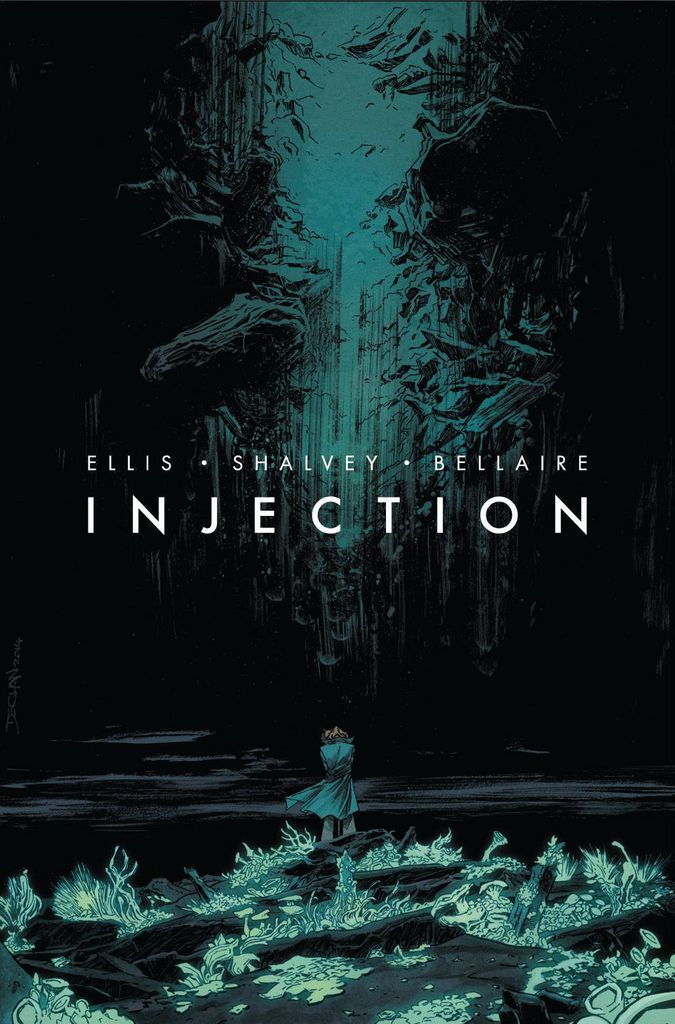 The first issue of a new comics series is often compared to the “cold open” on a television show — the part that comes before the credits, setting up the conflict of the episode without slowing down to explain it. As far as this comparison goes, some opens are colder than others, and Injection #1 is positively frosty.

The first panel shows the exterior of a Gothic building. Panel Two reveals the writing on the door: “Sawl Ung Hospital.” Next we see an extreme closeup of a pair of eyes. Then the angle reverses to show, from the back, that those eyes’ redheaded owner is looking out the window of a dingy room. The next page continues in silence, as the redhead passes masked (why?!) security guards on the way to see a visitor, a woman in a trench coat, her silver hair in a tight bun. Finally, on the last panel of the second page, Injection has its first line of dialogue, when the visitor greets the patient by her name: “Doctor Kilbride.”

From here, the comic plunges us into the story of Maria Kilbride, past and present, and her friends and associates. Before she was institutionalized, Maria worked in something called the “Cultural Cross-Contamination Unit.” The visitor represents “Force Projection International,” and she wants Maria to find a missing person. Vague threats are exchanged.

We also check in on Brigid Roth, a black woman from Dublin who drinks too much while monitoring a radio in a shed near an ancient stone circle; Robin Morel, a young-appearing man who’s obsessed with the history of England, after possibly having seen more than his fair share of it; and an anonymous woman in sunglasses, who wants Robin to embrace his heritage as a “Cunning Man.” Then there’s the Actionable Archaeology Annex, which takes its visitors through a door into a storm-wracked hellscape. And, oh yes, this is all somehow tied to “The Matter of Britain,” a term heavily associated with the legends of King Arthur.

I don’t know what any of this means. I have no clue, even, what the “injection” of the title refers to. I don’t want anyone to explain it to me, either — at least, not yet.  The preview tells us that Injection is the story of “five crazy people” who “poisoned the 21st Century,” but issue 1 doesn’t even hint at what that’s all about. It doesn’t need to, because the slow layering of the central mystery — the mystery of what the mystery even is — has me hooked. I want to know more about Maria and Brigid and Robin, and the past they are running away from.

It helps that I have faith in the endless imagination of writer Warren Ellis. There’s more than an echo here of the ensembles-fighting-otherworldly-problems that Ellis has tackled in series like Global Frequency and Planetary, as well as his superhero work in the Wildstorm and Marvel Universes. But the astonishingly prolific Ellis has the ability to make each new take feel fresh. Injection doesn’t look quite like anything I’ve seen before, and that’s enough to get me on board.

It’s also interesting that the book literally doesn’t look like anything I’ve seen before — because Ellis is reteaming with artist Declan Shalvey, and colorist Jordie Bellaire, his collaborators on a critically acclaimed run of Marvel’s Moon Knight. While the art style is recognizably Shalvey’s, Injection doesn’t look like a rehash of the earlier collaboration. Not that this would be bad — Moon Knight is fantastic — but the new series is clearly undertaking a different project.

I first encountered Shalvey as the artist on Marvel‘s Thunderbolts, where he shared duties with Kev Walker. There, Shalvey seemed to be negotiating a middle ground between Walker’s gloriously weird, distorted approach to bodies and faces, and a more traditional house style. Moon Knight was more of a boutique book — a relaunch of a title that Marvel periodically tries to showcase, but never seems to get any real traction with — and there, Shalvey had more of a chance to show an individualized approach. The book fluctuated between dark cityscapes, and otherworldly dream realms, with the costumed Moon Knight standing apart as a black and white figure.

Injection, at least so far, features some of Shalvey’s most grounded, representational art yet. The scenes, from a cluttered office above a chip shop, to a run-down hospital room, to a ramble in the green hills of England, look like places you could visit, and the faces are less minimalist and more delineated than in previous work. When a monstrous visage peers from under a hood, then, or when a tech support call turns nightmarish, the disconnect from ‘our’ world is cast into stark relief.

Together, Ellis and Shalvey — along with Bellaire, whose sharp eye for color is making good pencils and inks look even better all over the comics world — have created a place I am eager to revisit, and started a story whose next chapter I can’t wait to read.

Injection #1 by Warren Ellis, Declan Shalvey, and Jordie Bellaire releases on May 13, 2015, from Image Comics.