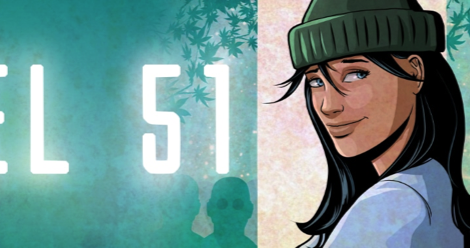 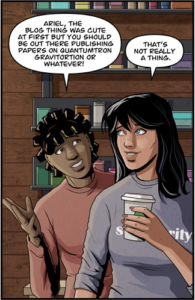 The slacker of her generation

The end must eventually come to all things, including webcomics, but I still find myself missing that which has come before. Sometimes there’s another comic that can fill the space (as Jeph Jacques’s main project, Questionable Content, for example, also follows the lives of an expanding cast of eccentric twenty-somethings making their post-college way) even as you see how the story arc has come to its logical end. In the case of Gran’s protagonist, Eve Ning, the axis of her life has always been the struggling organic grocery where she works. With the destruction of the grocery store, her story is no longer constrained by the former boundaries of her life. She has transcended her own narrative. Nothing about the character or her life at the comic’s conclusion resembles the character or life of page-one Eve. 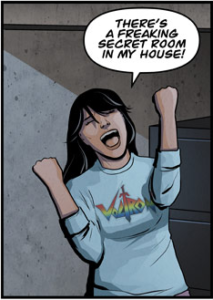 Ariel finds a freaking secret room in her house.

But why, I wondered, did Alice Grove need to end? Jacques could have chosen to write new chapters in the lives of characters who became very real in a very short time. Where would I go now for a weekly fix of outer space, secrets, and sarcasm? And why didn’t Spinester want to keep posting sick, hilarious riffs off popular culture and modern sentiment? When I went back to search for clues, I discovered that the answer to the latter question might also be the answer to the former.

In the blog portion of the comic, which I hadn’t read on my first pass, Spinester announced that he was ending Peppermint Helmet to focus on a new long-format story, Ariel 51. Written in a more traditional graphic novel style, Ariel 51 will publish on a once-a-week schedule, and follow the journey of Ariel Ackley, a conspiracy blogger who turned her back on a promising career in physics after witnessing her father’s death (or kidnapping?) at the hands of what appears to be an alien with glowing red eyes. And that’s just where the weirdness begins. Ariel is going places, and those places promise to be very, very strange. Think Men in Black if Tommy Lee Jones and Will Smith were women. 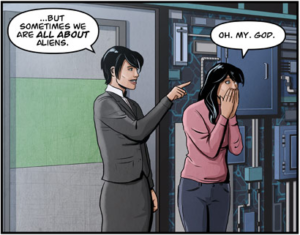 Sometimes, we’re all about aliens.

Outer space, secrets, and sarcasm, check! Also, there’s the fantasy element: I mean, a twenty-something blogger who never finished her graduate degree gets offered her dream job in a state-of-the-art top-secret fabled science facility without even having to fill out an application? That’s fantasy. But it’s balanced out with elements of realism. For example, there’s plenty of paperwork. For sure, we can expect government lies, technology beyond the current boundaries of science, and some varying degrees of hilarity and horror.

This story is still in its infancy, about thirty-five pages in as I write, but it’s already drawn me into its own mysteries as I start to wonder what extraterrestrial plots Ariel will discover and where that knowledge will take her. Even farther than Alice Grove, I hope.