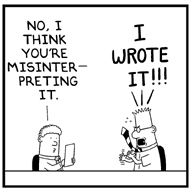 Everyone’s favorite, non-grumpy grammarian Mignon Fogarty had another post this week about words that even the most well-spoken among us may be misusing. If, for example, you’ve ever referred to a “three-month anniversary” or described something that wasn’t actually happening as “literally” happening, then you’ve been as guilty of this as I have.

Why do we miss these meanings? Usually it’s because we’ve heard a word or phrase used so many times in the wrong context, or no context, or we simply don’t pay attention to what we’re actually saying.

Which made me realize: the same thing is true for reading.

For as long as we’ve been interpreting literature, we’ve been misinterpreting it, from Shakespeare to Hemingway to Harry Potter (and let’s not get started on the Bible). And while it’s one thing to not truly understand an author’s intent, it’s another to go around quoting it as truism.

Compiling lists of the canon’s most misinterpreted quotes is apparently an honored calling, at least on the internet, and a couple of decent ones already out there can be found here and here.

The most common range from simple misunderstandings of Shakespeare’s interrogative pronouns (“Wherefore art thou, Romeo?” doesn’t mean “Where are you?”—he’s standing right there—but “Romeo, dammit, why do you have to be a Montague?”) to failure to consider the overall context (Robert Frost’s “The Road Not Taken” is a critique of individualism, not a tribute).

And here’s a nice list of some widely cited quotes from literature that don’t, you know, actually exist in literature, such as “Music hath charms to sooth the savage beast” (the original is “a savage Breast”) or “Elementary, my dear Watson” (Arthur Conan Doyle’s Sherlock Holmes often says “Elementary” and “My dear Watson,” but never in the same construction).

Too often, we forget that narrators—let alone authors—can be highly unreliable, and that what we learn from them must taken with a grain of salt (or at least an understanding of what’s in the rest of the paragraph) before we go around applying it to our own lives. Of course, it’s arguable, once a literary passage has reached the status of popular quote, to what degree the author’s original intent even matters, so long as society understands the accepted meaning. But for fans of literature and words and, well, accuracy, it’s reassuring to root what you say in its proper context.

“To thine own self be true,” from Hamlet, is something my dad has always liked to say to me in the (many, recurring) times that I question whether I may have made a certain decision or taken on a certain project more out of a desire to appease another than because I want to follow through on my own. The traditional interpretation of Polonius’s advice to his son Laertes is that it is a high-brow appeal to individualism, a call to find your own calling. But the hardcore Elizabethan audiences at the Globe would have understood what he really meant: Work for yourself first. Be selfish.

Hey, sometimes that’s good advice, too. It all depends on the context.