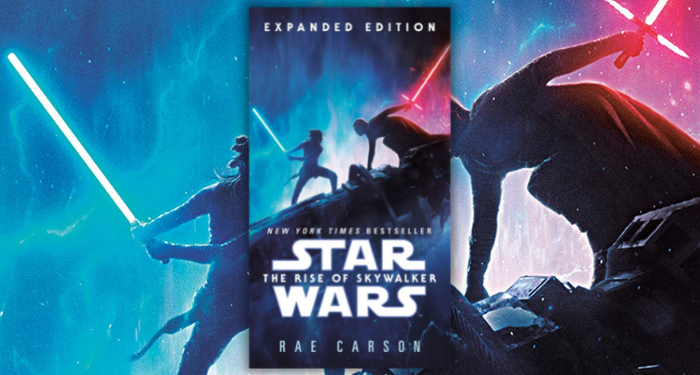 I’ve been thinking a lot about novelizations lately. I’ve read a few of them myself, but the genre isn’t that popular among bookworms. I don’t know if it’s because people assume they’re more like scripts than novels — which I get. If you don’t quite know what a novelization is, think of it as the direct opposite of a book to movie adaptation: they adapt a story that was originally a movie or a show into a book. But are novelizations worth reading? Do they bring anything new to the table, or do they just transcribe a film?

Right off the bat, I want to say that they are worth reading. They expand upon a movie or show, giving you a deeper insight into the characters. They can have other scenes that aren’t in a film — because they don’t have the time constraint.

Today I will go to a galaxy far, far away and show you that novelizations are actually worth reading. For this little experiment, I can think of no better example than Star Wars. Star Wars has tons of books, and novelizations for all nine films. The saga is beloved and polarizing, and I count myself among its fans. My least favorite SW movie is by far The Rise of Skywalker. It was a weird ride full of flashy lights that seemed like a purposeful misdirection so that you can’t stop and think, “what story are they trying to tell?” It’s a convoluted film, one that relies heavily on nostalgia.

I’m not the only one who doesn’t love this film, and I’m certainly not here to trash you if you do. I’m just here to say that while the film didn’t quite work for me you’d expect the novelization to fare similarly. But that couldn’t be farther from the truth. The Rise of Skywalker book is pretty good, and even redeemed the story for me.

But you don’t need to just take my word for it. I’m going to show you how the novelization builds upon the story that already exists to make a more cohesive whole. But to do that, I need to rewatch and reread The Rise of Skywalker.

Rereading The Rise of Skywalker Novelization

Note: this includes spoilers for The Rise of Skywalker, both the movie and novelization.

We get to see into the minds of almost every character. The novelization is told in third-person omniscient POV. So we get glimpses of many characters like Hux, Kylo, Rey, Finn — even Leia. I think this added to the emotional impact of the story by getting you closer to the characters. This specifically works well with Leia because when Carrie Fisher died, the filmmakers had to work with the material they already had. But in the book, that didn’t have to be a factor.

The extra scenes might have come from the script. I have for sure seen concept art of the creature Kylo encounters in Mustafar. But what’s important about these scenes is that they help build a more detailed story. Seeing things like Leia’s training or Rey’s visions help guide the story to its climax in a way that makes more sense. We even get to actually read Palpatine’s message, and see Kylo ask him who Rey actually is on page 29. We also get to learn the names of the Knights of Ren — which seems kind of important considering how they became the closest thing Kylo had to a family. Those might seem like tiny details, but they add up.

Because of the written format, it can take its time and explain things with more depth. I’m specifically talking about the dyad bond and Rey’s new healing power that culminates in Ben healing her and then dying. Around the middle of the book, Carson explains that that particular power is about giving Force energy, not channeling it. That’s why both Rey and then Ben die. Because the book explains these little details, the sequence of events ends up making more sense.

The last thing that I want to mention makes the novelization absolutely worth reading, and it comes from chapter 17. It’s in the last 20 pages or so, and it actually takes time to explain not only how Palpatine survived Episode VI —but how his son and therefore Rey came to be through a vision. It’s not long or detailed, but it allows the whole premise of this movie to make more sense.

So to wrap things up, I think it’s safe to say that novelizations let you experience stories very differently from films. I used this example because I know the material very well, and it is close to my heart. But I’m sure this can apply to many novelizations you read. They’re certainly not scripts, or just a rehash of what you see on screen. Instead, they’re a wonderful opportunity to give depth to a story you already enjoy — or even redeem stories you didn’t quite love. All because books can run a bit wilder than movies. They can be more expansive and detailed as well as giving you a more direct insight into the characters. So are novelizations worth reading? Abso-freaking-lutely.