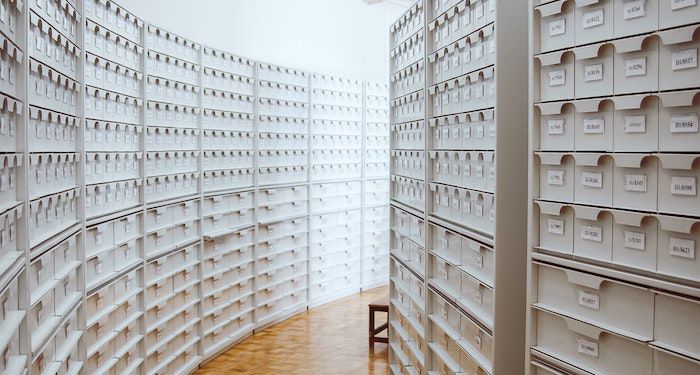 The funding of libraries and archives is something I’ve had cause to ponder recently. Right before the start of the pandemic, I borrowed two books from the library: Pat of Silver Bush by L.M. Montgomery and A Room With a View by E.M. Forster. I found them in the little visited section at the back of the second floor – the place that houses the books in foreign languages that have not been inventoried yet. I was a regular, so I was allowed to check them out. Then I went back home, and figured I’d read them in a few days.

When lockdown hit, the library shut down for a few months. Can you guess where this is going? Flash forward to this year, when I finally tackled the towering piles of books in my own personal library. Behind a stack of reference books, I found two slim volumes that looked familiar. You can imagine my dismay when I realized that I had all but stolen two library books. Bless the librarians for being mostly amused, and letting me off with a “just so we’re clear, these ones are inventoried, so if you’re late, we’re emailing and calling you on the phone”.

I share this anecdote because it illustrates, in a very low-stakes scenario, what can get lost when libraries and archives aren’t sufficiently funded and staffed. The books I’d checked out could be easily found elsewhere, and they weren’t financially valuable. But what if I had checked out a first edition? The single volume of a memoir? Even losing the inexpensive books I did check out could’ve been damaging if the library had been undergoing significant budget cuts.

The Main Difference Between Libraries and Archives

Before we really dive into this, let’s explore the difference between a library and an archive. While libraries keep collections of items of which more than one copy exists, like books and magazines, archives keep often unpublished, usually unique records with some type of cultural or historical value. A record is a document of any kind: a journal, a recording, a birth record, or even a grocery list. We’re all creating records every day, without thinking about it, as we go about our lives. And most of our records won’t be kept, even by ourselves.

However, there are records that are significant to a group’s cultural heritage. Sometimes to the world’s cultural heritage. A first draft of a beloved classic, the only recording of a person’s voice, a famous leader’s handwritten letter: these are all documents that are valuable and worth preserving. Archivists conduct an appraisal to decide what records they will keep and how to organize them in collections or fonds. Their work, and this organization, is vital for archival preservation.

Over the years, famous and invaluable (both culturally and financially) items have vanished from libraries and archives. One of the most curious cases is that of Stephen Blumberg, who was arrested in 1990 for the theft of thousands of rare books and manuscripts valued, back then, for $20 million dollars. This became a pivotal point in the care and maintenance of library and archival records, including more exhaustive inventorying.

Over the years the U.S. National Archives and Records Administration (NARA) has lost items like the patent for the Wright Brothers’ airplane, Civil War telegrams written by Abraham Lincoln, and NASA photographs from space. And this is only the tip of the iceberg. In 2006, NARA’s investigatory Archival Recovery Team was created with the purpose of tracking down some of these lost treasures. The ART, headed by Kelly Maltagliati, has cast a wide net in its efforts towards recovery: setting up sting operations, monitoring websites like eBay, visiting memorabilia and Civil War shows, and using social media, among other measures. They have been successful a number of times: in 2011, they recovered a thousand stolen audio recordings that included a 1937 radio interview of Babe Ruth.

In late 2017, the UK’s National Archives admitted they’d lost thousand of government papers about “some of the most controversial episodes in 20th century British history”: we’re talking documents about Northern Ireland’s Troubles and the Zinoviev letter, among others. How did this happen? Apparently, civil servants removed them from the archives – presumably after researchers requested to see them – and then reported them as lost.

What Is Lost When Libraries and Archives Aren’t Funded?

Circling back to my original question of what gets lost when libraries and archives aren’t funded, I reached out to a librarian in the PNW to ask about budgeting and its impact on collections. I don’t only mean “what gets lost” in the literal “we can’t find it” sense. I also mean what gets left behind, whether unintentionally or when priorities have to be revised due to a lower budget. As she told me, when collections are underfunded, the following things happen: “Wait times for materials goes up. Sometimes, way up. That’s for the materials we can afford to buy. It also means that things don’t get purchased. Old things, damaged things don’t get replaced. New things and new formats don’t get added.”

The implications of this are troubling, especially when one considers that the library can be the only way that some people can access these materials. When wait times for materials go up, a student’s access is impacted. When new formats aren’t added, disabled people are impacted. When damaged items aren’t replaced, a library’s existing collection dwindles.

Items also get lost in the literal sense of the term, as can be seen in the previous section. However, after Stephen Blumberg’s case, libraries and archives have developed methods to ensure that this happens only rarely. In order to minimize the chances, careful inventory has to be made when new items enter the library or, especially, considering that records are usually one of a kind, the archive. Modern technology makes this easier, but it’s still not foolproof.

Libraries will note the author’s name, the book’s title, section, reference call or call number. If it is checked out and not returned, the computer will remind the librarian of it. So it’s harder for libraries nowadays to lose these items. Archivists, on the other hand, will note the following elements: title, source of supplied title, dates of creation, physical description, ideally a biographical sketch, scope and content, custodial history (i.,e. who had this archive before us?), access restriction, repository, and call number. When all of this is accomplished, and the inventory is reviewed regularly, it minimizes the chances of documents disappearing. However, it is not a guarantee, as the previous disastrous anecdotes remind us.

Funding archives helps to preserve our history, and when budgets are cut, it’s easy for these vital, physical pieces of the past to quietly disappear.