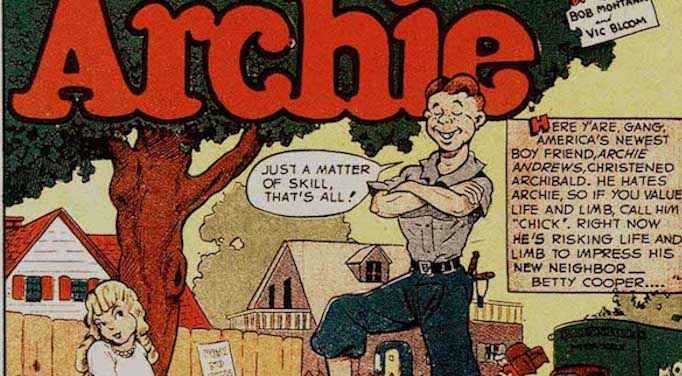 Superheroes have been around a long time, and most of the characters and genre conventions are pretty well established. But did every character always look and act the way we expect them to today? In this series, I’ll be looking at the first appearances of iconic superheroes to see what’s familiar, what’s fallen by the wayside, and what’s goofy as heck. Today: Archie Andrews!

…Okay, yes, you’re right, Archie is not a superhero, except sometimes in his identity as Pureheart the Powerful. But much like Captain America, who I covered earlier in this series, Archie made his debut 80 years ago this year, and I think that merits taking a look at his first appearance. Will it be exactly like an episode of Riverdale? Let’s find out!

Archibald “Archie” Andrews first appeared in Pep Comics #22 (December 1941), published by the company that was then known as MLJ Magazines and is now, of course, Archie Comics. At the time, they mainly published superheroes, which had been popular since Superman first appeared three years prior, but publisher John L. Goldwater (the “J” of “MLJ”) wanted to experiment with a comic that would appeal to fans of the Andy Hardy movie series starring Mickey Rooney — i.e. one full of normal teenage hijinks. With artist Bob Montana and writer Vic Bloom, Goldwater created the core Archie gang, several of whom appear in this very first story.

Sure enough, Archie’s not even on the cover of Pep #22 — that honor goes to the Shield, MLJ’s patriotic superhero. America’s favorite redhead (citation needed) doesn’t appear until the sixth story in this 68-page issue, but once he does, he’s…um, hideous.

Is that Archie Andrews or Alfred E. Neuman?

There’s so much going on here. First of all, Archie is wearing knickerbockers. Knickerbockers! I’m in love. (The slingshot in his back pocket is also very charming.) Second, apparently he hates being called “Archie” and prefers “Chick,” which…sorry about the next 80 years, bud. Third, how frickin’ adorable is Betty over there? Betty, who has supposedly just moved to town, a piece of trivia that would quickly be retconned by about nine million issues of Li’l Archie.

Archie’s antics pretty much instantly lead to the destruction of a painting of Betty’s father and her mother’s priceless porcelain vase, which…yeah, this perfect storm of girl-giddiness, poor judgment, clumsiness, and terrible luck is exactly the Archie we know today, even if nowadays he doesn’t sometimes appear to have his entire head shaved except his bangs. Seriously, that last panel is distressing.

Archie goes home, where he slides a book down the back of his pants to cushion the spanking he’s about to get from his father, which…well, this was eighty years ago, I guess. Luckily, his grandfather, who will rapidly be dropped as a regular character, intervenes on his behalf, though not before the strain of the book splits his pants. Oh, Archie.

And hey, look, it’s Jughead! Looking and talking exactly like Jughead always will! Well, he’s not eating 17 hamburgers at a time, but otherwise he’s the laidback ace rep we know and love today, though that dog resembles neither Jughead’s Hot Dog nor Li’l Archie’s Spotty. Also, this early version of Jughead’s weird crown makes it much clearer that it’s actually a cut-up fedora, which was known as a “whoopee cap” and was popular among teens in the 1930s and ’40s.

Betty has an idea to fix things for Archie: her father’s lodge is hosting a carnival, and if Archie helps Betty run the taffy stand, Mr. Cooper will be so grateful he’ll forgive everything. Archie doesn’t really want to help, but he agrees. But his earlier bragging gets him into hot water when the carnival ends up short one tightrope walker and a trusting Betty volunteers him for that, too.

Again, the art comes across as very old, but the bad luck (and Jughead hilariously combining steadfast loyalty with clearly not actually caring all that much) continues to ring true to today’s Archie. A modern comic would probably skip the, um, suicide joke in panel five, though. Yikes.

Archie falls directly into the taffy, obviously, which gets everywhere, forcing him and Jughead to flee. Look at that old timey milk wagon!!! I am delighted (and suspect taffy is not good for horses or cats and dogs, so be careful, boys).

And that’s it! Just six pages, but Archie and Jughead, at least, are pretty much exactly as they will be for the next eight decades, though Betty has yet to grow into either her early “obnoxiously obsessed with Archie” personality or her more modern girl next door perfection. Veronica showed up not too long after, in Pep #38, and Reggie Mantle a bit after that in Jackpot Comics #5, rounding out the core gang. And all of them were very close to their final forms right away. That’s some impressive staying power!

If this article has gotten you craving more Archiean antics, Riverdale has been renewed for a sixth season and will be back in November. I look forward to the episode based on this issue, where probably someone is murdered in a taffy machine and also Archie makes a speech about football. Go Bulldogs!