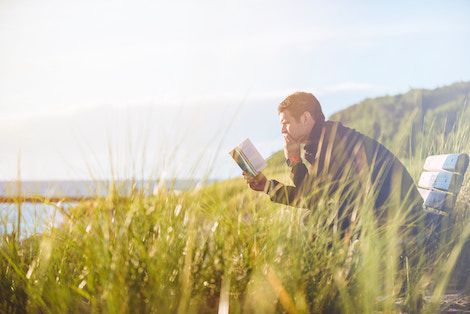 Like every month, April has its share of strange celebrations. The third Thursday is apparently “National High Five Day” in the U.S., while the last Monday is “International Noise Awareness Day.” (Doesn’t the noise itself…?)

But two of the month’s major observances—Arab American Heritage Month and National Poetry Month—fit particularly well together. From the time of turn-of-the-20th-century writers like Khalil Gibran (1883–1931) and Ameen Rihani (1876–1940), Arab American poetry has played an important role both among Arabic- and English-language poets.

Just as they did at the beginning of the last century, Arab American poets are innovating both language and form. 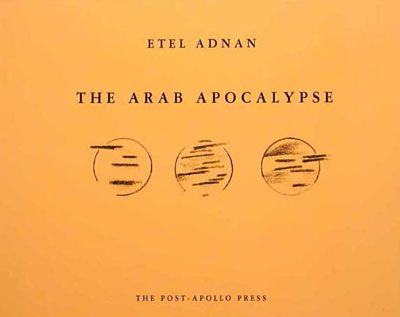 The Arab Apocalypse by Etel Adnan (1989)

This is one of the contemporary classics of Arab American poetry. From XXXIX:

the human tide moves on… 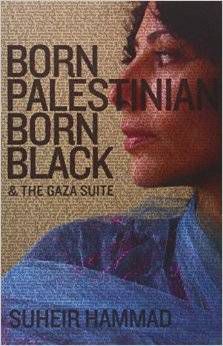 Hammad’s powerful first book of poems, originally published by Harlem River Press in 1996 and brought back into print by the excellent UpSet Press. You can read a talk between Nathalie Handal and Suheir Hammad, in which the poet—who straddles the worlds of written and spoken-word poetry—says:

“It is an association that I was born with. I don’t know what Palestine looks like, what Palestine tastes like, but it is something that is in your blood and we all carry ancestry around with us. As a child I was told that I was different from everyone else around me, I was Palestinian. I think that becoming a woman and understanding myself, being Palestinian becomes what I make it. I may not be like every other Palestinian and that is good. It is also something that I realize I have to claim for we are not living in a perfect society where we do not have to claim nationalities or religions.” 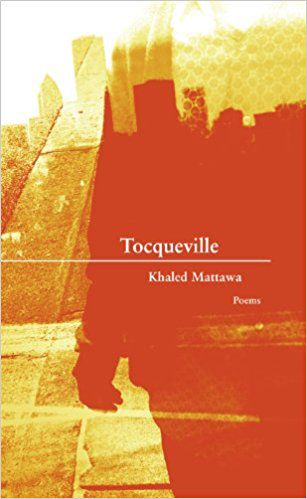 Mattawa has been awarded several Pushcarts, a Guggenheim Foundation fellowship, the Alfred Hodder Fellowship at Princeton University, and a MacArthur fellowship. Several of these prizes came after the publication of Tocqueville,  an exploration of our global cultural mashups in which the title poem is a re-invention of Alexis de Tocqueville’s Democracy in America. 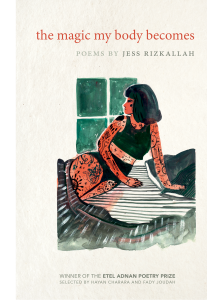 the magic my body becomes by Jess Rizkallah  (2017)

Winner of the inaugural Etel Adnan Poetry Prize, by Lebanese American poet Jess Rizkallah, this collection “freely asserts gender, sexuality, and religious beliefs, while at the same time it respects a generational divide: the younger’s privilege gained by the sacrifice of the older, the impossibility of separating what is wholly hers from what is hers second-hand.” 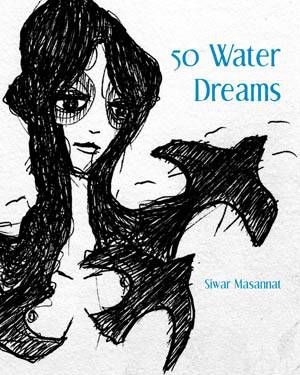 This is the auspicious debut of Jordanian writer and 7iber alum Siwar Massannat, winner of the Cleveland State University Poetry Center’s First Book Award. I’ll quote poet Ilya Kaminsky: “How rare and exhilarating it is, in our time, to find a book that is both wildly inventive and daring in its style and incredibly compelling in its content! 50 WATER DREAMS takes us on a book-long journey of Fadia and Ishmael and a mysterious horse that keeps the house company (‘horse that humanizes the house,’ ‘horse that may keep the house from dying’).” 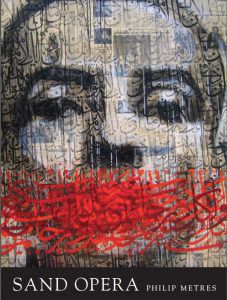 Winner of the 2013 Beatrice Hawley Award, Phil Metres gives us sharp, clipped narratives of the post-9/11 US. Also, the first section of the work, “abu ghraib arias” was published in 2011 as a chapbook and received the Arab American National Book Award. From the first section: 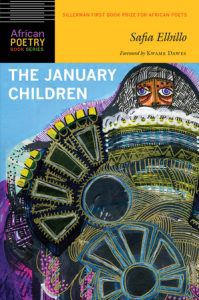 The January Children, by Safia Elhillo (2017)

This book won the Sillerman First Book Prize for African Poets. In her dedication, Elhillo writes, “The January Children are the generation born in Sudan under British occupation, where children were assigned birth years by height, all given the birth date January 1.”

Of the collection, Arab-American poet Lena Khalaf Tuffaha writes: “The January Children opens with a prayer in the cadence of a translated Quranic passage: ‘verily   everything that is lost will be / given a name   & will not come back / but will live forever.’ Safia Elhillo’s poems name loves and worlds even as they slip through our memories and our languages. And for that and the treasure of these poem, I send up a heartfelt Ameen.” 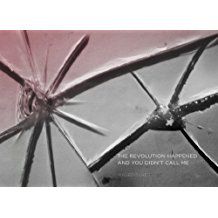 The Revolution Happened and You Didn’t Call, by Maged Zaher (2012)

Most Zaher fans would probably choose his collection The Consequences of My Body (2016) or Thank You For the Window Office (2012), but I particularly enjoyed the heartbreaking humor of The Revolution Happened and You Didn’t Call, written in the wake of the January 2011 uprising. 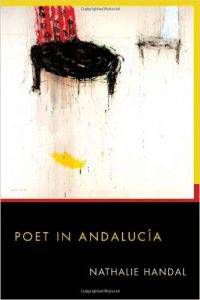 Poet in Andalucia, by Nathalie Handal (2012)

I’m fairly certain this is my favorite Nathalie Handal collection. As I wrote about this collection in a 2012 review, “Handal is particularly drawn to the shadows of Andalucía’s joint Islamic, Judaic, and Christian history.”

In “Alhandal y las Murallas de Córdoba,” “The past is here / the song of the Arabs here, / the song of the Jews, / the Romans, / the Spaniards, / and the phantoms.” It is clear why: Palestine is not mentioned, but it is everywhere. Palestine is in Murcia, in Toledo, in Córdoba, and in a dozen other places. The narrator of “The Thing about Feathers” does not name a country, but it is hard not to see Palestine: “I am seven / it is the day before our departure, / the day my father / gives me a notebook, / and I tell him, / this is where I’ll keep my country.” 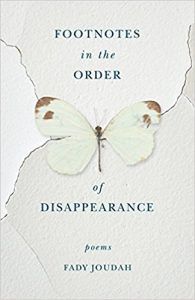 Footnotes in the Order of Disappearance, by Fady Joudah (2018)

I’m still reading this one, moving back and forth through it, hovering over the section written with Syrian poet Golan Haji, and then darting out again. Poems that fuse the language of contemporary medicine with that of poetic lyricism, as well as poems that re- and de-construct memory and history. 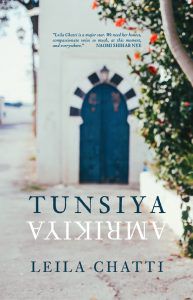 This book came out this month, the editors’ selection from the 2017 Frost Place Chapbook Competition. From Chatti:

When referring to a suicide, we say she took
her own life because we recognize a life

isn’t ours, not really, it’s a thing
borrowed or worn for a short while

like a coat in winter, but
it was August when she stole

her life in her own two hands, the sky
sweat on everything, or wept, all metaphor— 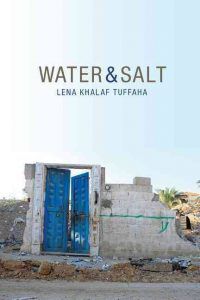 In an interview for ArabLit earlier this year, Lena said of the works that inspired her: “I also moved a lot as a child, in and out of Arab and American school systems, so my relationship with various literary traditions was interrupted or enriched, depending on your perspective. I was introduced to very few English-language poems by women in middle school and high school.

“My sense of English-language poetry was that, unlike Arabic, which was peopled by the lines of Al-Khansaa’ and Fadwa Touqan and Nazek al Malaika, English-language poetry was the stately business of old white men. Some of whose work I loved: Robert Frost, William Butler Yeats, and this one Ted Hughes poem that I love-hated, that haunted me in 10th grade: “Griefs for Dead Soldiers.” Then there was Naomi Shihab Nye—her work was well-spring and mirror and open fields. I still don’t have the words for what it means to read her poetry. In college, in Seattle, I found—or was found by—the work of Audre Lorde, Adrienne Rich, June Jordan, H.D., among others. Their work changed my life—how I read, how I write.”