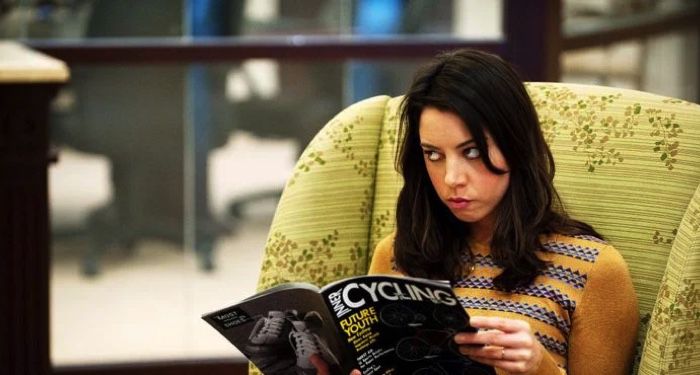 I’m a serial re-watcher, as I’m sure many of you are, too. Especially when it comes to sitcoms. I can’t count the number of times I’ve rewatched The Office or New Girl. Quoted from The Good Place and Trial and Error. Recently, I dove back into the world of Parks and Recreation.

While typically I’m too absorbed in Ben and Leslie’s love story, Chris Traeger’s positivity, or Leslie’s compliments for Ann Perkins, on this rewatch I was drawn to April Ludgate.

While on the outside, her who-cares attitude and intentional lack of competency along with her less-than-agreeable general disposition shine through. Especially in comparison to her dedicated coworkers. But when I took a moment to notice what was going on in the background, I saw our beloved April Ludgate might show an interest in something we all do here: reading!

In scenes spanning the show’s 126 episodes, April can be seen reading a variety. A gorgeous copy of Pride and Prejudice. Magazines like “Cycling,” as well as ones with covers we can’t see. Joan Calamezo’s memoir takes up more than one of her talking heads. Air Force Nøne by Gay Perello is tossed to the ground when she’s caught reading rather than working yet again; this title falls into a favorite running joke of mine: punny, word-playey, or just downright silly titles, like Mulch Ado About Nothing and Limb-Itless: A True Tale of One Woman’s Ridiculous Courage.

While I know if she were asked if she liked reading, the answer would be some insult about nerdiness, while in the background, her actions prove otherwise. She’s a bookworm. One of us.

Which, sure, in and of itself isn’t that revolutionary. But, I was struck by it nonetheless. She, of do-what-I-want-when-I-want-attitude, turns to the same books (and just general love of words) we nerdy, introverted readers do. She’s a rebel. She hates everything. I, meanwhile, am introverted and people-pleasing and rule-following to a fault. But, April and I have something in common.

After giving it more thought, I think we have more than that in common. Yes, we’ve both read Pride and Prejudice. But, I think it’s deeper than that. I think reading is very often a rebellion in the modern-day.

April blatantly reads at her desk at work. While this is, admittedly, at the encouragement of her boss, those working around her often bend over backward to fulfill their mission. With all of the time Leslie Knope spends at work, I’m surprised she didn’t keep a bed there. I also wonder how she read so much when she spent all that time at work, but that’s another thing entirely. April says “ha” in the face of doing her work. She says “no.” She does as we all dream of doing during the monotonous hours of our 9 to 5’s or the lulls of customer service work: she reads instead.

I still remember the thrill of sneaking a book under my desk during math class. Of reading just one more page after the teacher says reading time is over. Of checking out books outside of my “allowed” age range, competing to be the student in my grade who read more than anyone else. My library had a competition each month and the winner would get their photo taken with their favorite book and hung in the library! To me, that was worth more than learning about cloud patterns or the animal kingdom or whatever else was going on at the front of the classroom.

April’s rebellion is the rebellion of reading long after the lights went out at home. Of hidden flashlights and just-one-more-chaptering until the sun comes up. For me, of a goody-two-shoes attitude, I realize that I do have an April Ludgate rebellion in me. For saying no, for ignoring rules, for not closing the covers of that book just yet.

I think this is even more important now, as more and more books are banished to banned books lists. We, as book lovers, know just how important books are in teaching us about the world and empathy, and how to be people. How to communicate with each other better, what to pocket from stories of the past to keep with us forever. They are worth breaking the rules for. For sneaking under the desk, reading a few minutes too long on a lunch break, hiding under the disguise of the cover of something more “suitable.”

We are rebels! If you’re ever in doubt, look at April Ludgate. Say no. Pull out that book. Read, you rebel. Read.