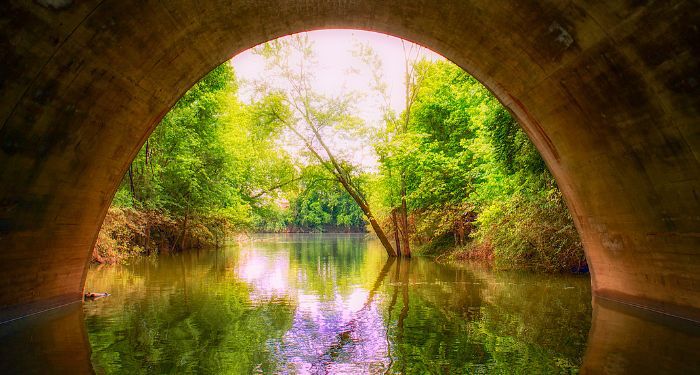 Portal fantasies – fantasy stories that involve hopping from one high-concept magical universe to another, usually through a specific mechanism that allows the characters to travel between worlds – have been popular throughout the history of the genre. Portal fantasies arguably predate the novel form itself; legends about travels between the Nine Realms in Viking mythology, or journeys to the land of the fairies in Celtic myths, could be viewed as early portal fantasies. One of the earliest fantasy novels ever published, The Blazing World by Margaret Cavendish, can potentially be read as a portal fantasy, as the main character reaches a utopian world by passing through the North Pole. Alice’s Adventures in Wonderland combines portal fantasy with the dream narrative trope, with Alice falling into Wonderland through a rabbit hole, but returning to the real world by waking up. C. S. Lewis’s Chronicles of Narnia are some of the most famous portal fantasies of twentieth-century literature. The eponymous wardrobe in The Lion, the Witch and the Wardrobe is an iconic portal to a fantasy world, but the pools leading to different universes that we see in The Magician’s Nephew also deserve a mention.

Twenty-first century fantasy literature has also leaned into the portal fantasy. L. D. Lapinski’s series The Strangeworlds Travel Agency has protagonists Flick and Jonathan travelling through myriad worlds via magical suitcase. In Karuna Riazi’s The Gauntlet, a group of children use a magical board game to access a dangerous world, where they must win the game or risk being trapped forever. And A Blade So Black by YA author L. L. McKinney draws on Alice’s Adventures in Wonderland to create a portal fantasy that moves between modern-day America and the Nightmareverse, a more dangerous iteration of Wonderland.

Why have portal fantasies remained popular over the decades and, indeed, centuries? There are many things about portal fantasies that appeal to readers of speculative fiction, from the concept to the way it impacts the plot.

While most fantasy novels are set in one world, portal fantasies can allow the author to create a multitude of different worlds for their characters to explore. In The Magician’s Nephew, we not only see the beginning of the new world of Narnia, but we also get to explore the world of Charn, where Jadis – otherwise known as the White Witch – originally came from. In the Strangeworlds series, we follow Flick and Jonathan to worlds like Five Lights, full of magic and wonder, and other worlds such as the Break, a tiny ocean world inhabited by pirates and merfolk. In Heidi Heilig’s The Girl From Everywhere, Nix and her father’s sailing ship crew travel to a huge variety of real-world locations at different points in history, as well as legendary and mythical locations, through maps that Nix’s father uses as a focus and guide.

Diving into different worlds is one of the most appealing things about reading fantasy literature, and while portal fantasies may mean that the author can’t go into the same kind of detail as with a story entirely set in a different world, this is offset by the fact that the world-hopping structure means the reader gets to experience a variety of worlds instead of just one. Portal fantasies may not always have the depth of world-building that we get with traditional fantasies, but they make up for it with a breadth that allows the writer to play around with multiple concepts for different worlds.

The best world-building is the kind that complements and impacts the characters’ journeys. The assortment of different worlds that we see in portal fantasies can be a great way for writers to show different sides of their protagonists’ personalities. The different game scenarios that Farah encounters in The Gauntlet allow her and her friends to demonstrate their ingenuity and tenacity. Neil Gaiman’s Coraline, a portal fantasy that switches between the real world and a terrifying Other world Coraline accesses through a doorway, sees Coraline taking lessons she’s learned about her family and neighbours and using them to survive her encounters with their twisted counterparts.

Portal fantasies give authors the opportunity to throw their characters into a huge variety of different situations, showing the reader important things about their personalities.

Another reason that portal fantasies appeal to readers is because of the role of speculative fiction in reflecting and commenting on contemporary real-world history and society. Fantasy stories have often been a way for writers to reflect reality; for example, Terry Pratchett’s Making Money looks at capitalism and the economic recessions of the time it was written, while Legendborn by Tracy Deonn looks at the implicit racism of privileged institutions. Portal fantasies, unlike one-world fantasies, can be a way for authors to reflect on a number of different real-world situations in one narrative. Strangeworlds’ exploration of Five Lights looks at overconsumption, while the world of the Break can be read as a metaphor for climate change. The Magician’s Nephew was written in 1955, ten years after the atomic bomb was created, and in Charn, we see a world devastated by its rulers’ use of ‘the Deplorable Word’, a spell that destroyed all living things in that reality apart from its former ruler, Jadis. The fate of Charn can be seen as a magical counterpart to the feared potential fate of the real world during the Cold War.

As well as reflecting concerns and worries about our current world, portal fantasies can allow the author to explore a host of worlds that give us a break from reality, or even hope for the future. In Diana Wynne Jones’ classic Howl’s Moving Castle, we see this happen through the character of Howl himself, who is escaping the mundanity and responsibilities of his original world. The light-hearted fantasy rules of Sophie’s own world, however, will appeal to many readers. In Philip Pullman’s His Dark Materials series, we see some utopian worlds alongside the darker and more dystopian ones that protagonists Lyra and Will explore – I still think fondly of the world of the mulefa in The Amber Spyglass.

The diversity of ideas and worlds in portal fantasies means that there is a portal fantasy book for every reader, with route through to a multiplicity of different worlds.

For a comprehensive run-down of some of the best portal fantasies, read 50+ Must-Read Portal Fantasy Books. Teen readers can try 8 Great Portal Fantasies for YA Readers.