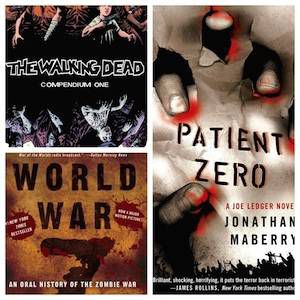 As if it were an infestation, interest in stories about the zombie apocalypse continues to spread. I find these stories interesting because many of them begin in media res and are told from a limited point of view. In other words, they are more concerned with the “how” of the apocalypse than the “why.” As a result, we, the readers, are rarely introduced to Patient Zero.

To appreciate an apocalyptic story, do we need to know the reason why?

One story about the zombie apocalypse that begins in media res is Robert Kirkman’s graphic novel series, The Walking Dead. The Walking Dead begins with sheriff’s deputy Rick Grimes waking up from a coma, only to discover that while he was unconscious the world was overrun by zombies, or as they are referred to in this story, walkers. Since Rick is the main character the story is told from his point of view. Consequently, the reader is kept ignorant about the “why” of the zombie apocalypse.

Another example is Max Brooks’ World War Z: An Oral History of the Zombie War. Here, the story of the zombie infestation, from the initial outbreak to its containment, is told through individual survivor testimonials. The origin of the outbreak is traced to China, but once there, the leads become increasingly less tangible. Ultimately, the “why” of the zombie apocalypse is not fully explained.

A novel that takes a different approach from The Walking Dead and World War Z is Jonathan Maberry’s Patient Zero. This is a story about Baltimore police officer Joe Ledger, who is recruited by the government to hunt down a terrorist group threatening to unleash a zombie virus on the world. Unlike The Walking Dead and World War Z, the plot of Patient Zero revolves around the question “why.”

If we venture outside zombie territory, there are apocalyptic stories using both in media res and a limited point of view. One such story is Ben Marcus’ novel The Flame Alphabet, where the world is coming to an end when children’s speech becomes toxic to adults. The novel begins with Sam and Claire packing their car to escape from their teenage daughter, Esther. In having Sam tell the story Marcus does not explain why children’s speech is deadly to adults. He only shows us how.

To answer the question at the beginning of this post, I would argue that whether or not it is necessary to identify Patient Zero depends on the story. For Maberry, it is crucial. For Kirkman not at all, because The Walking Dead focuses on survival on the level of the individual. However, in my opinion, the stories of Brooks and Marcus would have benefitted from an identification. World War Z because some of the testimonials are given by high-ranking politicians and military officers. Presumably, they would have had access to information that could answer the question of why there was an outbreak. The Flame Alphabet because they are researching a cure. If you are discussing a way to stop the “how” without discussing the “why”, your quest will be futile.

The way I see it, the exclusion of Patient Zero can be interpreted as a sign of how we view society in the twenty-first century western world. More often than not, we have no idea why certain things happen to us. Epidemic diseases have taught us that love and family ties can be lethal. The belief in one person’s ability to make a difference seems to be waning.

As gloomy as this might be, these stories also demonstrate the state of human existence. During times of hardship, we reach within ourselves to find strength as we continue to search for love and companionship.