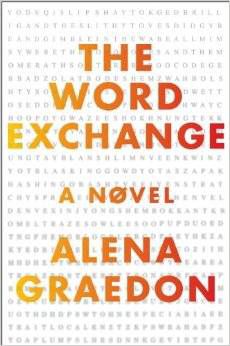 I love dystopias. Totalitarian governments, widespread oppression, the constant threat of death, environmental destruction, corporate hegemony: these are the courses of one of my favorite bookish meals. This might make me certifiably insane, but, if that’s the case, so are a lot of you. Newer entries in the genre like The Hunger Games trilogy, the Divergent trilogy, the MaddAddam trilogy (we like dragging out the misery, obviously), Gary Shteyngart’s Super Sad True Love Story, and Cormac McCarthy’s The Road have all managed considerable success, while Fahrenheit 451, The Handmaid’s Tale, Brave New World, and 1984 remain fixtures on high school reading lists (and will no doubt keep their place there, barring the commencement of an actual dystopian future [oh, the irony]).

Okay, so it isn’t just me. We clearly love dystopian novels. But why, exactly?

I got to wondering about this after finishing Alena Graedon’s forthcoming novel The Word Exchange (available April 2014 from Doubleday) and chatting briefly about it with a couple of fellow Rioters. I described the book as what you’d get if Nicholas Carr’s The Shallows (a book that ponders the internet’s effects on our cognitive processes, among other things), which Graedon acknowledges as an influence, and Jonathan Franzen’s paranoid (although not, to my mind, entirely unreasonable) fears about what technology threatens to do to writing, books, and people’s minds. I also mentioned that the novel felt Bradbury-esque (in a good way, if that isn’t clear) in spots. This was enough to entice a couple of Rioters to hunt for a review copy and another to mention that she’d abandoned the book after about a hundred pages.

By and large, I enjoyed The Word Exchange, although I understand how it could put a reader off. It’s tone is probably a notch too paranoid (read: Franzenian) for long stretches, and some of the leaps it makes regarding the ways technology might corrupt our collective intelligence and possibly even dissolve our language necessitated a few hard eye-rolls. That said, I was consistently intrigued by the novel’s mystery plot and the ideas driving it.

Which brings me back to my question, and leads me to alter it a little: why do we enjoy some dystopias, while others do nothing for us?

The simple answer (which probably, I know, also means the incomplete answer) is fear. Fear is the root of every dystopia, and it’s the glue that keeps the reader stuck to its characters and conflicts for the book’s duration. If you harbor any distrust of your government (or governments in general), then 1984 will speak to you more powerfully; if you’re concerned about climate change and corporate power, then Margaret Atwood’s MaddAddam books will be likelier to get under your skin. And if you suspect that our reliance on technological devices is doing at least as much harm as good, then The Word Exchange is more primed to draw you in.

Which leads me to believe that I might be more panicked about the damage our devices have the potential to do than I admit. If asked, I would probably say that I’m more concerned than the average person, but I have an iPhone and an ereader and use Facebook and Twitter and pretty much stop reading-slash-listening to someone when I hear them use the phrase, “the death of reading.”

In the world of The Word Exchange, however, everything I’ve just described is seen as a one domino in a long line of them, leading not just to a disconnection from print or other people, but to global catastrophe. Hence the eye-rolls. But something in the novel had to speak to me, or I wouldn’t have spent as much time as I did nodding along, buying in to bits and pieces of the logic that Graedon uses to get us from Nicholas Carr’s thesis to her vision of potential techno-disaster.

It was while trying to reconcile this seeming discrepancy that the answer to my question popped into my head.

Dystopian novels act as mirrors in ways that few other kinds of fiction do. By looking into them, we see the problems of today repackaged as sinister prophecies, and they let us do exactly what I describe above: nod along from a safe distance (not unlike talk radio shows or news commentary programs that align with our preexisting views). Essentially, dystopian novels are another chance for confirmation bias to rear its head once again in our day-to-day lives. When a speculative- or science-fiction author pens a dystopian work, we get to feel satisfied about our worries, even if they’re barely part of our conscious thought, because a dystopian novel promises us that we’re right to worry about whatever’s troubling us. Since we’ve come to see dystopias as predictions about what our current world will come to if X, Y, and Z don’t change, our brain reads them in the same way we would a study about an issue that might affect us. If the study reports what we already believed, we’re likely to latch onto its findings as proof that we were right all along, while if it contradicts our beliefs, we’ll ignore it or rationalize away its findings.

The Word Exchange takes all my latent issues w/r/t technology and feeds me confirmation for what I believe – or, I guess, what I’m not too far from being persuaded to believe – about how those issues might manifest themselves negatively in the future. That I’m a sucker for all kinds of dystopian futures must mean that I’ve got a lot of worry, suspicion, and possibly even cynicism to work through. Which sounds about right, honestly. Worryingly.

This doesn’t mean that the views in question aren’t well-formed or justified, just that dystopian fiction allows us a pleasing way to explore the way we view the world. Or, of course, the way we might come to view the world, given the story is frightening enough.