Joseph Fink’s Alice Isn’t Dead is a novelization of the popular Night Vale Presents podcast, which ended back in August. I enjoyed the podcast but sometimes had trouble remembering the exact details of what had happened between seasons. Unsurprisingly, by reading the whole story at once, I was able to pick up on some details I hadn’t previously noticed. I expected to read a scary story featuring a mystery, a government conspiracy, and some of the weirdest places in America. I did not expect for that story to mean so much to me as a person with anxiety. 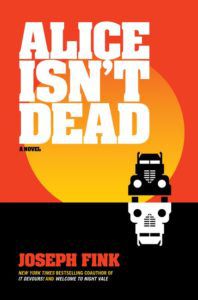 Keisha believed that her wife, Alice, was dead. She had a funeral, she attended a support group, she mourned—and then she saw her wife on the evening news again and again. She decided to become a trucker with the same company Alice had been working for before she disappeared—because now she knows that Alice isn’t dead and she needs to know why she left her. Keisha also has anxiety and is being hunted by humanoid creatures called Thistle Men.

For some reason, I have never purposely sought out books with protagonists who have anxiety, so Alice Isn’t Dead is the first time I got to see someone like me be the hero of a horror novel. In the course of the novel, Keisha’s anxiety never goes away—she doesn’t become less nervous about the regular things that trigger one’s anxiety because there are literal monsters after her.

In Alice Isn’t Dead, we are reminded that sometimes it’s hard to get through the day but we do it anyway. Sometimes you have to face the monsters because you are the only one who can. Keisha tells a lot of people that she’s afraid, she’s always afraid, but she continues to fight because it’s the right thing to do.

We may not all be taking down a conspiracy that reaches the highest levels of government, but we can still do great things even though we’re anxious. Anxiety is always part of who we are, but it’s not all of who we are.