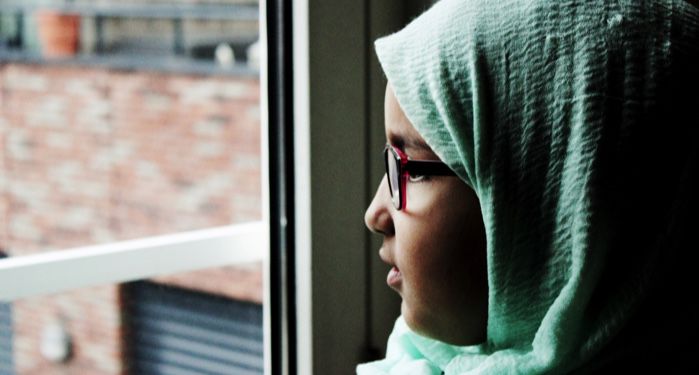 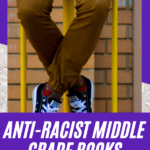 Amid the protests across America following the death of George Floyd in Minneapolis at the hands of a white police officer, an incredible outpouring of resources emerged. They featured books that don’t just highlight the struggle for rights by Black people and other people of color, but how it is white people can push past calling themselves not racist and participate in real anti-racist work.

This anti-racist work goes beyond adults. It’s work that children not only understand and can participate in, but that is vital for their futures as anti-racists.

There have been a number of anti-racist picture books and anti-racist YA books published in the last few years. These are meant to engage young readers in these conversations and do so in a way that doesn’t depend upon them—or their adults—to ask people of marginalized groups to do the work for them.

What’s been talked about a little less, though, are anti-racist middle grade books. This is a tricky life stage: many readers can read books that fall in the YA category, but when it comes to big, meaty topics, they absorb some of what they grasp, but not everything. In no way is this a bad thing. It’s an opportunity to revisit these works as they grow up and can pick up more along the way.

But there are a number of excellent anti-racist middle grade books out there, perfect for readers in that 8–12 year old category that are ideal to be read alone, as well as with an adult who can have open, frank, and maybe even uncomfortable conversations with them.

Becoming Kareem: Growing Up on and off the Court by Kareem Abdul-Jabbar

Abdul-Jabbar continues to be a leader in the fight for justice and equality, and this memoir is about his youth, his career, and how experiences with racism and prejudice helped him become the person he is today. Especially good for readers who love sports, as well as those who are familiar with his name (it’s been in the news again lately, so chances are even if young readers don’t know his basketball career, they know he’s important).

Betty Before X by Ilyasah Shabazz and Renée Watson

Shabazz is the daughter of Malcolm X and Betty Shabazz, and she’s written a fictional story based on the real-life activism of her mother in the years before she met and married Malcolm X. The story begins when she is 11 and covers four years of her life—the same period of time middle grade readers are in as they read the book—and highlight how she found purpose and her activism.

Isabella is mixed race, with a Black father and a white mother. She’s used to being called all kinds of names for this—she’s exotic, unusual, and easily targeted for questions about what her true identity is. With her parents divorce, she’s now forced to confront and understands both of her identities and what it really means for her to be who she is.

This Book is Anti-Racist by Tiffany Jewell and Aurelia Durand

In this guide Jewell not only breaks down what it means to be anti-racist and what racism looks like and sounds like, but also offers 20 lessons on how young people can take action and ensure a more just future. Durand illustrates the book and makes it extremely approachable, even for more timid middle grade readers. An outstanding primer for helping build language and understanding around what anti-racist work really is.

Woodson’s highly decorated memoir in verse is vital reading for any age, but it’s powerfully resonant for middle grade readers. This book takes them through Woodson’s youth, growing up Black in America, and how what she experienced and learned at home and in the world around her helped shape her into the writer—the human—she is today. This one not only will build empathy but offers opportunities for readers to see what it means to fight for justice and equality.

Neighbors Karina and Chris have never really been friends, but when Karina’s grandfather starts to tutor Chris, she discovers he is a fabulous person. After a horrific attack on the three of them, fueled by racism—Karina and her grandfather are Indian American—Karina shares photos of the attack on social media, wherein her community rallies around them and other marginalized people in their area in support of change.

12-year-old Jerome was shot and killed by a police officer who mistook his toy gun for a real weapon. Now, as a ghost, he sees what happens to his family and community in the wake of his murder. He also meets in his afterlife Emmett Till, who guides him through a history of racism, police brutality, and ultimately, comfort.

A Good Kind of Trouble by Lisa Moore Ramée

Shayla is just starting middle school and, along with her best friends, hopes she’ll have a smooth and painless year. She likes to ride the middle, being a good kid and staying away from any trouble. But she soon finds her friends pulling away from her, and little by little she begins to wonder what it is she’s done to see the friendships fracturing and changing. Shayla’s big sister is involved in local activism, and specifically the Black Lives Matter movement. Shayla’s never wanted to get involved, but after another police-involved shooting of an innocent black person, she’s beginning to have more and more discussions at home about why it is she might want to speak up and out. So she begins a small movement within her school, as inspired by her sister, bringing black arm bands for her friends to wear in support of black lives. This, however, gets her in trouble. But it’s the kind of trouble that, as much as she fears being part of, she understands as powerful, as necessary, and as something that her parents will approve of.

Into The Streets: A Young People’s Visual History of Protest in the United States by Marke Bieschke (August 4)

Though marketed for young adult readers, given the visual nature of this book, it’s one that will likely do well with upper middle grade readers as well. Bieschke’s book explores the history of protests—peaceful and violent—throughout time in the U.S. It includes those who drive those protests, what the outcomes were, and related ephemera including photos, protest signs, and more. An outstanding reminder of how protests have shaped policy and reform in this country.

This nonfiction book explores the ways young people throughout the world are working toward eliminating the prison system. A primer to restorative justice, and since it features young people, it should inspire a lot of hard conversations—and actions—about reforming another aspect of White Supremacy in the U.S.

This award winning graphic novel, which will have a companion in October, is about not only being the new kid in a new school but about the ways privilege, bias, and racism—both overt and subtle—play out. Jordan attends a wealthy school on financial aid and is one of the few kids of color there; he experiences incredible micro and macro aggressions, and as a light skinned black boy, he sees racism play out in a variety of horrifying ways.

The Only Black Girls in Town by Brandy Colbert

Alberta’s always been the only Black girl in her class. But when a new girl moves into the old Bed and Breakfast across the street, she quickly wants to befriend her as she, too, is Black. It’s not a quick friendship, but it is one which evolves through the discovery of old journals in Edie’s attic. The journals reveal to them a history of their small town and its not-great relationship with race.

The first in a duology about Shuri from Marvel’s Black Panther. Shuri is T’Challa’s younger sister, and no big deal but she’s tasked with saving Wakanda from whatever it is that’s killing the Heart-Shaped Herb which powers Wakanda’s Chieftain. Stone, of course, incorporates plenty about racism, power, and white supremacy. Readers who love this world will take away much more than a story of a younger sister.

We Are Power: How Nonviolent Activism Changes The World by Todd Hasak-Lowy

What Lane? by Torrey Maldonado

Stephen wants to do everything that his friends do, and he feels like he should be able to. But he’s mixed race, and the realities of his life look different than those of his white friends. He’s treated differently by people than his friends are, and is it really safe for him to do the same kind of exploring of his town his friends do? Maldonado has written a number of excellent anti-racist books for middle grade readers, and this one is especially important for understanding the unique challenges experienced by people who are mixed race.

Pairing poetry with beautiful art, this book is a reminder of the value in speaking up and out. These are all poems by women about social justice, discrimination, acceptance, and so much more. An appropriate book for all ages, it’s especially powerful for younger middle grade readers for whom art will really resonate.