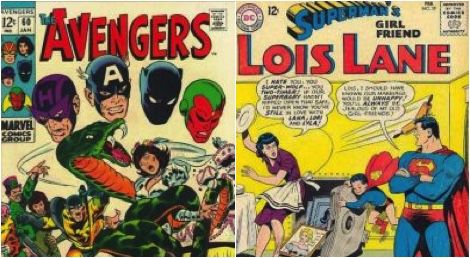 It’s one of the most infamous moments in Marvel history: Yellowjacket (Hank Pym), in a fit of frustrated rage, backhands his wife, the Wasp (Janet van Dyne). This, combined with Hank’s other erratic behavior, causes the Avengers to expel him and Jan to divorce him. Hank’s reputation has never recovered. Some fans still refer to him as a wife beater, and in one alternate universe, Captain America beats the tar out of Hank for being an abusive scumbag.

We can argue until the Skrulls come home about whether Hank Pym deserves to be so maligned. (For the record, editor Jim Shooter says the slap was supposed to be accidental.) But that’s not the focus of this article. Instead, in light of this summer’s release of Ant-Man and the Wasp in theaters, I figured I should take a minute (or 1312 words) to explore Hank and Jan’s relationship and how it reflects a larger trend of comic books depicting domestic violence—particularly when perpetuated by a woman against a man—as part and parcel of normal relationships, or even as comedic devices.

But what do abusive women have to do with the Wasp and her violence-prone husband? It pains me to say this, because I love Jan (and Hank) quite a lot. But in her earliest appearances, Janet van Dyne is at least as abusive as Hank Pym.

A FAILURE TO COMMUNICATE

During their courtship in the early to mid-1960s, Jan frequently goes out of her way to make Hank jealous. If he’s too caught up in his experiments, rather than talking to him about it, she’ll flirt with the first guy she can find to try to make Hank pay attention to her. She throws a tantrum every time Hank says he wants to leave the Avengers, and then she rationalizes her behavior by saying that superheroing is good for him. In other words, what the comic wants us to believe is that Jan really does care about Hank and knows better than he does what’s best for him, no matter how many times he reiterates that he’d rather wear a lab coat than spandex.

But this is kid stuff compared to Avengers #59–60.

Thanks to a chemical accident, Hank develops rapid onset schizophrenia. (Or so the comic says.  His symptoms bear little resemblance to schizophrenia, but that’s an article for another day.) He forgets his identity, becomes a supervillain named Yellowjacket, and kidnaps Jan, even forcing her to kiss him. This is obviously not okay. And neither is Jan’s reaction. 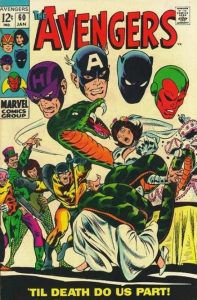 The kiss tips off Jan as to Yellowjacket’s true identity. Instead of getting him help or even arresting him, Jan hastily plans a wedding and marries Hank before his memory returns. Never mind that Hank had earlier expressed reservations about marrying her. After all, who cares what Hank thinks? Jan’s wants are clearly more important!

This manipulative, controlling behavior is not treated as such in the story. If anything, we’re supposed to think of Hank and Jan as a cute, loving couple. The issue even ends with them kissing as Jan assures us this wedding is legal. Well, I don’t know what Jan actually feels for Hank, but real love it is not. Real love does not involve taking advantage of your significant other’s mental illness because it’s an easy way to get what you want. Nor does it involve forcing your significant other into career moves you know he’ll hate. I shouldn’t have to explain this, but here we are.

All of this opens a wider issue of women abusing their male partners in comics because, sadly, Jan was hardly the only woman to treat her boyfriend terribly. On one occasion, Black Widow throws stuff at Hawkeye for daring to go on a mission without her. Wannabe heroine Tarantula straight-up rapes Nightwing and then plies him with alcohol to try to force him into marriage; according to the writer of this storyline, Tarantula has done nothing unforgivable and we’re supposed to sympathize with her. Lois Lane, in an imaginary story where she marries Superman, chucks a set of plates at her husband’s head. 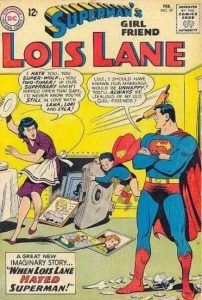 Now, sure, Superman isn’t going to be hurt by our puny mortal flatware.  He even takes a cavalier attitude about the whole thing, sighing, “Go ahead and throw things if it’ll make you feel better!” But it’s the intention that counts here, not the end result. Lois is so angry that she wants to hurt Superman and she is giving it her best shot, even though she has no chance of succeeding. This is unacceptable. So why don’t the comics treat it as such?

Is it a sexism thing? Is the idea of a woman hurting a man so ridiculous that it is worthy only of comedic fodder—even though most of the women I just cited either have powers or are frequently shown beating up super villains who dwarf them in size and physical strength?

In Hank and Jan’s case, maybe it’s a physical abuse versus emotional abuse thing? The single image of a man slapping a woman is more likely to inspire a visceral, instantly negative reaction than a series of panels depicting years of emotional manipulation.

ABUSE IS BAD, DON’T DO IT

Just to be clear, I spent this entire article ripping Jan a new one because she deserves it, but that doesn’t mean I’m absolving Hank of anything. Even though I accept Jim Shooter’s explanation for the events of Avengers #213, this was not the only time Hank hit Jan.

In Avengers #90, Yellowjacket and Wasp hitch a ride on a giant dragonfly to investigate some weird happenings in the Arctic. They don’t quite make it there before Yellowjacket senses danger. His response? He punches Jan unconscious and sends the dragonfly away with her tied to its back, supposedly because it was the only way to save her life.

It’s a flimsy excuse at best. He could have just turned the dragonfly around himself, staying with it and her to explain the situation. And anyway, Jan is a superhero. It’s up to her to decide which dangerous situations she goes into. Hank has no right to make that decision for her, especially not by knocking her out.

And that’s not even touching on his harassing behavior in the immediate aftermath of his developing “schizophrenia.” Schizophrenia doesn’t work that way! Unless the chemicals involved were mind controlling him, he’s still a sleaze.

Both Hank and Jan behaved abominably throughout their relationship, and both deserve flack for it. The fact that only Hank has been raked across the coals while Jan has not once, to my knowledge, been forced to confront her own behavior is reflective of this apparent idea that abuse isn’t really abuse if a woman is doing it.

In spite of all this, there’s still nothing wrong with liking Jan as a character, and Hank, too, for that matter. This goes back to my earlier post about dealing with outdated morals in comics: there’s plenty to love about old school comic books, but you have to be willing to put up with the stuff that makes you want to set those books on fire.

Like I said earlier, I personally love both Jan and Hank. I even love them as a couple. But the improved characterization they’ve had in more recent years doesn’t magically make past sins okay, and I would never suggest it does. Rather, I handle it the way I do every part of continuity that I don’t like: I headcanon it away.  In other words, I ignore it.