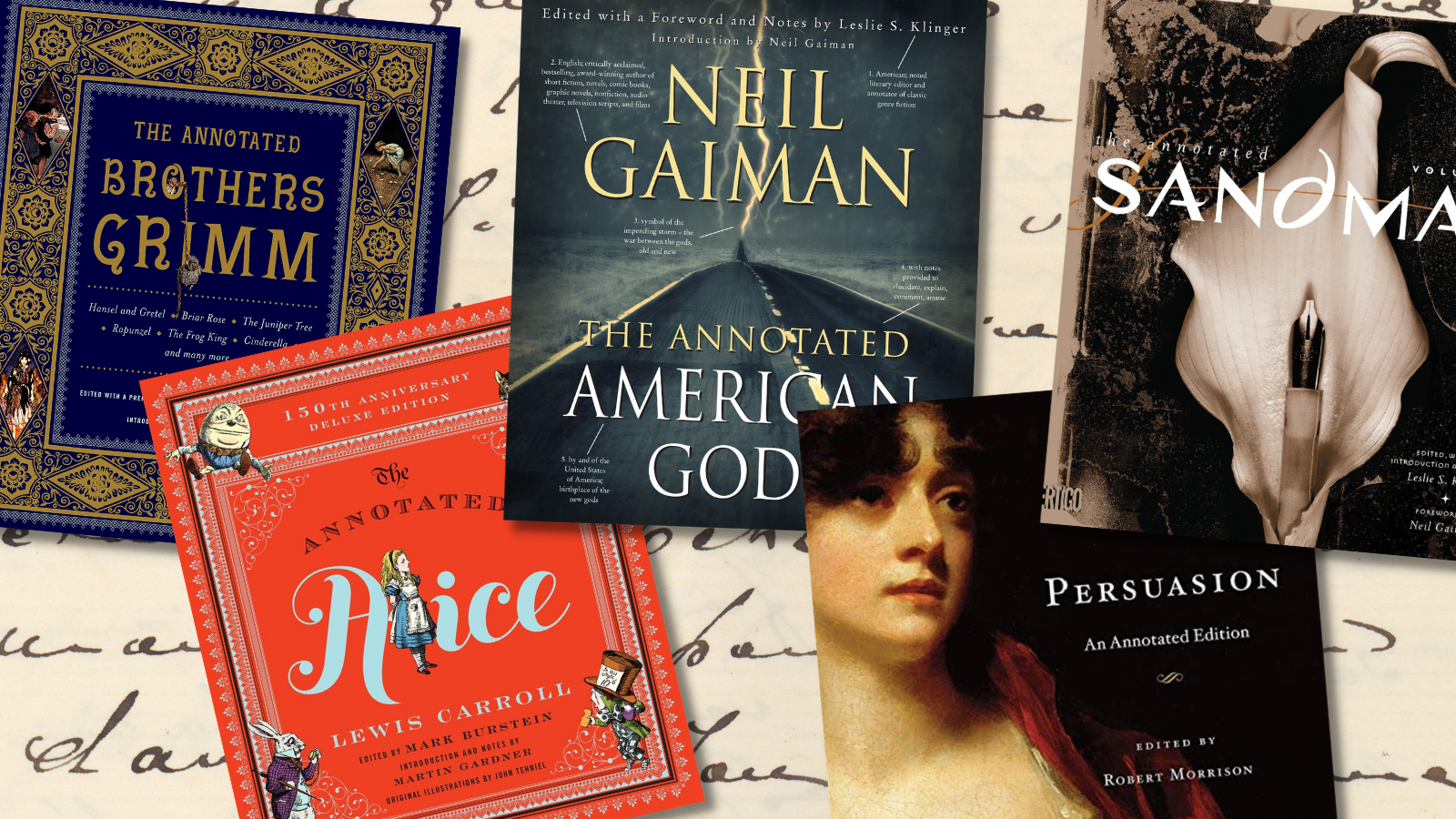 Annotated editions of books are versions containing copious notes from editors explaining the books’ historical context and providing analysis. They offer biographical details about authors or explanations of slang and other vocabulary. Many editions of Chaucer and Shakespeare provide glosses for words unfamiliar to most modern readers. Annotated editions contain similar notes, plus many more supplemental materials. These can include maps, diagrams, or other illustrations. Annotated editions are often bigger, longer, and more expensive than regular editions of the same book and may have notes alongside the original text, not only at the back. Whether you’re a fan, a scholar, or a casual reader, annotated editions can offer expert, in-depth perspectives on books.

A note on diversity in this category: most annotated editions are of “classics,” which largely means books in the public domain by cisgender white men. Of course, there are exceptions: annotated editions of 1,001 Nights, of African American folk tales, and of Virginia Woolf’s Mrs. Dalloway have all been published recently. Any of Toni Morrison or Zora Neale Hurston’s books would be wonderful choices for annotated editions. A few annotated editions of comics and graphic novels by living authors exist, so Persepolis by Marjane Satrapi would be another great option, and hopefully we’ll see more like this in the future.

In Biblical scholarship, there’s a long tradition of exegesis, or close readings and explanations of passages. In the 1960s, applying this level of background and close analysis to a secular, fictional text gained popularity.

Which books get annotated editions and why? Who reads them? What does the process of creating an annotated edition involve? To find out, I interviewed Maria Tatar and Leslie Klinger via email in July. I also asked them about their favorite annotated editions: their own projects and ones by other authors and editors. Maria Tatar and Leslie Klinger have each worked on several volumes in the W. W. Norton & Company Annotated Series. Titles by other editors in this series include The Annotated Mrs. Dalloway edited by Merve Emre and The Annotated Arabian Nights edited by Paulo Lemos Horta and translated by Yasmine Seale. Harvard University Press also has an annotated editions series, including Little Women by Louisa May Alcott and several Jane Austen titles.

Professor Tatar told me over email: “Annotated editions require both tender feelings for a text and an intense form of archive fever. As editors, we explore every nook of the narrative and every cranny of the author’s life, ruthlessly hunting down facts, allusions, images, and anything else relevant to the words on the page. There is nothing that beats the immersive experience, self-indulgent at times, of living with a story for several years. On the other hand, I would love to get back the number of weeks I spent going down the hellish rabbit hole of securing permissions and rights to reprint.

“There is, of course, a randomness in the universe of annotated books. The so-called beloved books — Alice in Wonderland, The Wizard of Oz, Pride and Prejudice — have all made it into the pantheon, and I’m hazarding a guess that many of the annotated volumes belong to childhood favorites.”

Similarly to Maria Tatar, Leslie Klinger says: “The first step is to choose a book that you’re passionate about, because you’re going to spend a lot of time with it! My process first involves research — has anyone else annotated the book or looked at its composition in depth?” Then he pores over the text, highlighting words and phrases that would be unclear to most 21st century readers. He asks himself questions as a reader, then tries to answer these through research: “What does this mean? Who is this? Why is this person reacting this way? I then go back and try to answer all of my own questions, with giant piles of reference books and of course the internet.”

Leslie Klinger’s favorite and most challenging project to work on was The New Annotated Sherlock Holmes, annotating a total of 60 stories. “It’s true that there were three earlier annotated editions, but there had been a ton of materials published after those came out,” he wrote.

Although most annotated editions are of books in the public domain, Klinger has had the rare opportunity to annotate books by living authors. “I’ve been lucky enough to annotate three books with living authors: The Sandman and American Gods with Neil Gaiman and Watchmen with Alan Moore and Dave Gibbons. It was an incredible experience to actually ask them questions — about what something meant, about why they made the choices they made!” Leslie Klinger suggested Maus by Art Spiegelman as another graphic novel that would make a fascinating annotated edition.

Klinger added: “I like to say that the books that I annotate don’t need my help to be great books, but I hope to bring the reader added pleasure…I tend to choose books that have a built-in audience — readers who will be excited to have an annotated edition of a book.”

In a 2007 review of The Annotated Pride and Prejudice, edited by David M. Shapard, The New York Times’ William Grimes points out several examples that illuminate Austen’s text. The word “condescending” means snobby or patronizing today, but in Austen’s time, it meant “polite to inferiors.” 21st-century readers who don’t know that — or how Regency social hierarchies worked — might have the opposite interpretation of Mr. Collins from Austen’s original readers. Collins says Lady Catherine de Bourgh, whom he deeply admires, “condescended” to speak to him. The edition also explains which fruits would have been rare status symbols to wealthy, white people in the 18th century English countryside.

In 2011, Harvard University Press published an interview on its blog with Robert Morrison, who had recently edited Persuasion: An Annotated Edition by Jane Austen. He explained how his previous work as a biographer helped him research and annotate Persuasion, and how the annotation process enhanced his interpretation of Austen’s novel. The unique format of annotated editions brought his comments to the forefront: alongside Austen’s text, not in footnotes or endnotes.

Each book format, as fascinating as it is, can have pros and cons for different readers. In 2019 on BR, Abby Hargreaves wrote that she prefers to skip book introductions, which frequently contain spoilers. Many people avoid annotated editions for the same reason. Library employee Heidi L blogged in 2018 that reading an annotated edition of a book that she’d never read before could slow her reading momentum.

Leslie Klinger agrees that your first reading of a book probably shouldn’t be an annotated edition. He explained: “I think people who love the underlying books read annotated editions, to enhance their enjoyment of a book that they already love. In order to do a good job of annotating, you necessarily need to ‘spoil’ surprises and twists in the book — you need to point out foreshadowings and talk about how the surprises and twists are set up. I always say, if you haven’t read the original book before, read it first, then go back and read the notes. I think of my notes as being the ‘director’s track’ for a book — to really get the benefit of it, you need to see the film first, without someone talking in your ear!”

I love Leslie Klinger’s comparison to director’s commentaries and other DVD special features. The Annotated Alice contains scenes Lewis Carroll excised from the first published versions of Alice’s Adventures in Wonderland and Through the Looking-Glass. These are the literary equivalents of “deleted scenes” from movies. As with DVD special editions, fans and scholars may enjoy them the most.

In Maria Tatar’s opinion, there is no downside to annotated editions. Readers who dislike the notes can ignore them — at least until they’ve finished the story. She wrote to me that “when it comes to stories, less is not more, and you can always skip the annotations if you don’t care for them. Where else can you find such beautifully produced books, that combine text, image, interpretation, and so much more?”