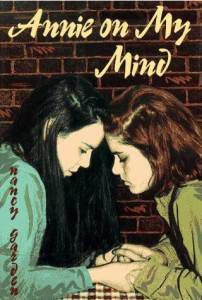 The now iconic Annie on My Mind by Nancy Garden was first published in 1982. Since then, it has never been out of print (!!) and has been re-issued in different editions in 1988, 1992, 1999, and 2007. The 2007 version—the one that I own—is a commemorative edition, which includes an interview with the author where Garden discusses her motivations in writing the novel, her experience publishing it, and her thoughts on the challenges the book has faced. In 2000 School Library Journal selected Annie as one of the most influential books of the 20th century! In 2003 Garden was selected by the American Library Association (the ALA) as the recipient of the Margaret A. Edwards Award for lifetime contributions to literature for young people. As you can see, there’s a lot of library love for Annie On My Mind.

Why was Annie On My Mind such a big deal and why does it continue to be relevant today? Well, prior to its publication, YA fiction (and, indeed, much of the fiction for adults as well) only portrayed queer sexuality if the book simultaneously condemned that sexuality and handed out negative consequences, such as gay characters dying in tragic accidents, being left by their partner for different gender relationships, or even deciding that they were in fact not gay at all. See: the plot of every ’50s lesbian pulp novel I’ve ever read. At best, some of these early gay characters were sidekicks or foils for straight protagonists without any plot lines of their own. In other words: happy endings not allowed. (For more information about that trend, you should definitely read this Library School Journal article by Christine Jenkins).

When Nancy Garden published Annie On My Mind in 1982, with its delightfully happy ending and positive story for two 17-year-old girls, it was like a big slap in the face to these earlier “rules.” Unfortunately, this meant a backlash. The ALA Office for Intellectual Freedom counts Annie On My Mind as one of the most frequently challenged books in the early to mid-1990s.

Indeed, Annie on My Mind has been challenged in many contexts over the years since it was published. I’m just going to tell you about the most well-known and dramatic case that took place in a school library context in Kansas, a controversy that involved literal book burning and a U.S. federal court case!

Of course, the crux of the challenge in Kansas that ended up garnering nationwide attention in the U.S. was that Annie On My Mind was the first YA book that depicted main characters’ same-sex relationships in a positive light, a point which Garden makes in the interview with her in the 2007 commemorative edition of the novel.

The case in Kansas began in a particular school district in Olathe, KS, where a gay rights organization named Project 21 had donated copies of Annie On My Mind—which was by then a well-known YA novel—to junior high and high school libraries in several Kansas school districts in 1993. (The information about the details of the case that I refer to in the next few paragraphs is from an article called “Annie’s Day in Court: The Decision from the Bench” by Randy Meyer that was published in the School Library Journal in 1996). 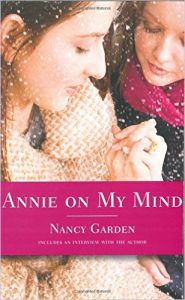 Because it was a gay rights group that had donated the materials, the donation garnered some media attention. A month after librarians had assessed and accepted Annie On My Mind (they had rejected the other proposed donation, a YA novel about gay teen boys, because of “lack of literary merit”), the school superintendent Ron Wimmer overrode the librarians’ decision. He ordered them not only to turn down the donations, but also to remove the copies of Annie that the district’s school libraries had had on the shelves for ten years. In fact, he wrote a “Book Donations Guideline” for the district’s libraries without consulting librarians or any other district staff. The school board subsequently approved his decision, apparently even after consulting their lawyer about the constitutionality of Wimmer’s decision. At no time did anyone in the school administration go through any formal process for challenging, assessing, or requesting the removal of the book. If you’re thinking this is totally bananas and homophobic, you are obviously correct.

Parents and students were also involved in this process as administrators and librarians were making decisions. After the donations were made but before Wimmer made his decision (in October 1993), protestors burned copies of Annie on the school steps of the Kansas City. In January 1994, students at Olathe South High School in Kansas made and distributed leaflets opposing the removal of the book. That same month, the student government at Olathe East High School unanimously approved a resolution that called for the book’s reinstatement at their library. Go student activists!

In March of 1994, the American Civil Liberties Union filed a lawsuit against the Olathe school district on behalf of a group of seven students and their parents who opposed the banning of Annie On My Mind. The case went to federal court in the fall of 1995 and Nancy Garden herself was called as a witness. A U.S. District judge in Kansas ordered the book returned to school library shelves and “made available according to the usual terms and conditions prescribed for the use of library materials in the District.” Ultimately the judge ruled that its removal was unconstitutional and violated student’s First Amendment Rights. Part of the court statement reads as follows:

Accordingly, the court concludes that defendants removed Annie on My Mind because they disagreed with the ideas expressed in the book and this factor was the substantial motivation in their removal decision…The highly irregular and erratic manner in which defendants removed Annie on My Mind from the District’s libraries and their disregard of established policy and procedure are important evidence of their improper motivation. In addition, defendants did not consider or discuss less restrictive alternative to the complete removal of the book. This is also persuasive of improper motivation. (Quoted from Meyer’s article).

Doesn’t this sound like something that should be made into a movie? I mean, banning is terrible obviously, but it’s fascinating. I know I’d love to see a movie version, of both the novel itself and the entire situation with the banning and court case.

The case of Annie On My Mind is a reminder about the double standards that are still to this day are sometimes applied when depictions of queer sexuality versus heterosexuality in YA literature are being assessed. While YA novels depicting romantic and sexual relationships between teen girls and boys with the same or even higher level of detail as Annie On My Mind were undoubtedly held by the Kansas school district libraries at the epicenter of this controversy, the fact that Garden’s novel portrayed a loving and positive relationship between two girls was what made all the difference.

What’s funny today for me is that when compared to some of the more explicit sexual content I have encountered in both queer and straight contexts in contemporary YA, Annie On My Mind is actually pretty tame. Kissing scenes move early to fade-to-black, and sex in the context of the novel is very much in the category of “appropriate-because-they-are-in-love.” This isn’t to say it’s not an adorable love story, but it sure is hard to see what all the fuss was about.

Although the harsh institutionalized homophobia and other ’80s cultural references in the book would likely be dated for some teen readers today (although unfortunately still relevant for others), I was actually surprised at how fresh and appealing the girls’ romance still felt when I recently reread the book. If you like contemporary LGBTQ YA, Annie On My Mind is a fascinating historical complement. It’s also just a great teen love story that I would recommend to anyone.

(Want more queer YA? Check out my 100 Must-Read LGBTQIA YA Books.)