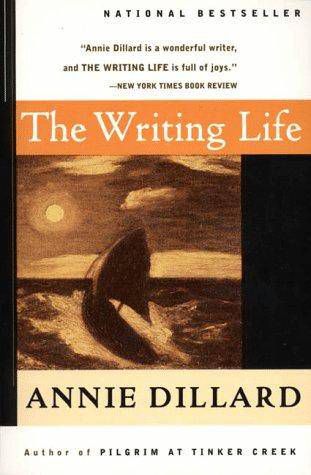 I don’t really know how these kinship trees work, but Annie Dillard is my third or fourth cousin twice or something removed on my father’s side. Suffice it to say we’re distantly related, and we both grew up in Pittsburgh. But that’s as close as we’ve ever been.

When I discovered Dillard’s The Writing Life in college, I said to my father, a former high school English teacher, Have you read this? And he said, oh, Annie’s my cousin, and I was all shrieky with delight, your cousin? you’ve been so quiet about the family’s rock star. And he was all, what does that mean? It was the usual father-daughter intergenerational interaction, he’s into Shakespeare, not narrative non-fiction.

The Writing Life is a bowl of nectar for anyone who has ever aspired to write. “Only the coffee counted,” she says. What budding novelist can’t relate to that? Or, “This morning, as on so many mornings, I lacked sufficient fuel for liftoff,” and “I must quit.” “I hate to write. I would rather do anything else.” Writers, isn’t this so honest? Wouldn’t you rather drive a bus?

It’s also a little dishonest; Dillard is so good, that even when she’s hemming and hawing, and rattling her cage, and scraping the bottom of the barrel, the barrel holds a fancy artisinal barrel-aged balsamic vinegar that goes for a hundred dollars a cruet.

However, it is a comfort to know there is more than a bit of a struggle, even for her, to write. It is a craft. “I do not so much write a book as sit up with it, as with a dying friend,” Dillard writes. This is a stick-with-me image. I imagine every piece of writing at one point had a thermometer in its mouth. I like the metaphor of writer as nursemaid, and hospice worker. It captures the very real semi-aliveness of books.