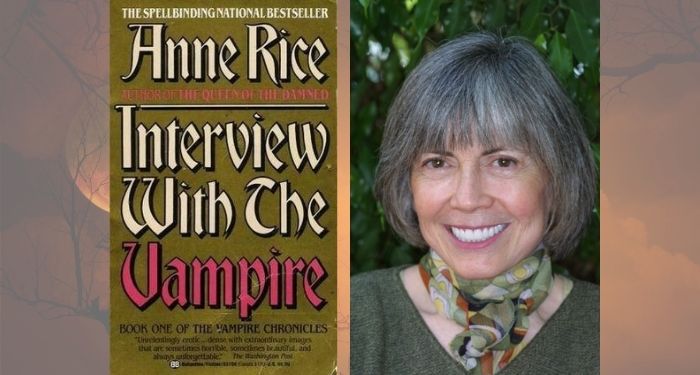 Anne Rice, beloved author of gothic novels such as Interview with the Vampire and The Witching Hour, died on Saturday at a hospital in Rancho Mirage, California, due to complications from a stroke. She was 80 years old.

“Dearest People of Page. This is Anne’s son Christopher and it breaks my heart to bring you this sad news. Earlier tonight, Anne passed away due to complications resulting from a stroke. She left us almost nineteen years to the day my father, her husband Stan, died. The immensity of our family’s grief cannot be overstated. As my mother, her support for me was unconditional — she taught me to embrace my dreams, reject conformity and challenge the dark voices of fear and self-doubt. As a writer, she taught me to defy genre boundaries and surrender to my obsessive passions. In her final hours, I sat beside her hospital bed in awe of her accomplishments and her courage, awash in memories of a life that took us from the fog laced hills of the San Francisco Bay Area to the magical streets of New Orleans to the twinkling vistas of Southern California. As she kissed Anne goodbye, her younger sister Karen said, ‘What a ride you took us on, kid.’ I think we can all agree. Let us take comfort in the shared hope that Anne is now experiencing firsthand the glorious answers to many great spiritual and cosmic questions, the quest for which defined her life and career. Throughout much of her final years, your contributions to this page brought her much joy, along with a profound sense of friendship and community.”

Anne Rice is probably most well-known for her Vampire Chronicles series, starting with her first published novel Interview with the Vampire, which was released in 1976. Anne Rice wrote “Interview with the Vampire” as a 30-page short story around 1968. Then, shortly after the death of her daughter, Michelle, at the age of five from leukemia, she expanded the story into a novel. Fans and critics of the novel have long speculated that the character of Claudia was based on Rice’s daughter, noting that the character is a similar age and even has the same birthday. While Rice said she never consciously wrote about Michelle in Interview with the Vampire, she did say, “I knew that I was using the physical beauty of Michelle as the model, but Claudia was a fictional character in her own right. The character, the voice, and the things Claudia say have nothing to do with my daughter—but there’s no question that this is the symbolic working out of a terrible grief. What else can it possibly be?”

While it received mixed reviews from critics, Interview with the Vampire became a bestseller, and Rice quickly developed a devoted fanbase. The novel and its many sequels (11 sequels in The Vampire Chronicles and 2 in the spin-off series New Tales of the Vampires) completely revolutionized the depiction of vampires in literature and pop culture. It also inspired multiple adaptations. In 1994, a film adaptation of Interview with the Vampire, directed by Neil Jordan and starring Tom Cruise, Brad Pitt, Kirsten Dunst, and Antonio Banderas, was released. The Queen of the Damned, based on one of the novel’s sequels, hit theaters in 2002. AMC is planning to release a series adaptation of The Vampire Chronicles in 2022. The network is also working on a series adaptation of Rice’s Lives of Mayfair Witches.

Rice has also written Christian fiction novels, although her relationship with Christianity and the church is a complicated one. Rice became an atheist at the age of 18, but she returned to the Catholic church in 1988 after a near-death experience where she fell into a coma caused by diabetic ketoacidosis (DKA). In October 2005, she announced that she wished to use her life and writing to glorify her belief in God.

However, just five years later, Anne Rice publicly announced her exit from Christianity on July 28, 2010. On a note to her fans on her Facebook page, she wrote: “Today I quit being a Christian… I remain committed to Christ as always but not to being ‘Christian’ or to being part of Christianity. It’s simply impossible for me to ‘belong’ to this quarrelsome, hostile, disputatious, and deservedly infamous group. For ten years, I’ve tried. I’ve failed. I’m an outsider. My conscience will allow nothing else.” Since then, Rice has posted further explanations of her connection to faith, stating that while Christ is still central in her life, she does not agree with the way he is presented in organized religion.

Throughout her career, Rice has also has a complicated relationship with her fans. Fan fiction has a long history of being a vehicle for hardcore fans of literary works and pop culture to interact with the works they so love. But not on Anne Rice’s watch. In 2000, Anne Rice released a statement on her website that read, “I do not allow fan fiction. The characters are copyrighted. It upsets me terribly to even think about fan fiction with my characters. I advise my readers to write your own original stories with your own characters. It is absolutely essential that you respect my wishes.” Anne Rice formally requested FanFiction.Net to remove any stories featuring her characters. There are also rumors that the author targeted specific fanfic authors with lawsuits.

Then, in 2012, in an interview with Metro, Rice seemed to soften her stance. “I got upset about 20 years ago because I thought it would block me,” she said. “However, it’s been very easy to avoid reading any, so live and let live. If I were a young writer, I’d want to own my own ideas. But maybe fan fiction is a transitional phase: whatever gets you there, gets you there.” With that being said, Anne Rice has since stated on her Facebook page that idea of fan fiction based on her characters makes her “uncomfortable.”

Anne Rice has made herself very available to her fans in other ways throughout her career. Rice created her facebook fan page as a way to speak directly to her fans, often referring to them as “People of the Page.” She also officially endorsed Anne Rice’s Vampire Lestat Fan Club, which for decades has held an annual Vampire Ball on Halloween that’s open to all Anne Rice fans (for a price with limited tickets available).

In spite of the author’s complicated history, Anne Rice’s influence over gothic fiction, specifically the vampire genre, is undeniable. “Anne Rice basically rewrote the rule book for vampires,” Interview with the Vampire director Neil Jordan told USA TODAY. “She said this thing of vampirism and eternal life is a metaphor for something, and in her case, it was a metaphor for subdued sexual longing and eternal guilt.”

Anne Rice will be interred in the family’s mausoleum at Metairie Cemetery in New Orleans in a private ceremony. A public celebration of the author’s life is being planned for next year in New Orleans. According to Christopher Rice’s statement, “This event will be open to the public and will invite the participation of her friends, readers and fans who brought her such joy and inspiration throughout her life.”

Ramses the Damned: The Reign of Osiris, a novel written by Anne Rice and her son Christopher, is set to release in 2022.