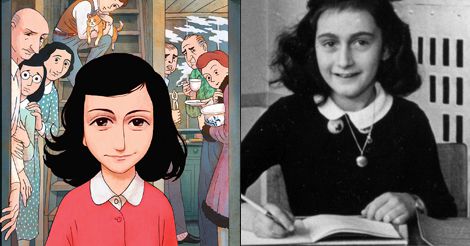 The graphic adaptation gorgeously captures the confessional spirit of the original diary with artistic expressions of Anne’s inner world. The book illustrates and expands on Anne’s dreams and imaginings, and one can almost believe that these are pictures Anne herself might have drawn as she was turning things over in her mind. For instance, there’s a graphic depicting the inhabitants of the annex as different animals. Another imagines her hypothetical wedding day with the boy she has a crush on. There’s a caricature of Mrs. Van Daan (one of the annex inhabitants, whom Anne loathes) sitting primly on her chamber pot as a nuclear missile falls on her head. One graphic shows Anne walking through an imaginary garden, filled with nude statues as she writes, “I must admit, every time I see a female nude, I go into ecstasy. If only I had a girlfriend!” And another image depicts her family floating on a cloud while the entire world burns beneath them.

A love poem written from the frontline of the Somme by the “great forgotten voice of the first world war”, the American author, heiress, suffragette and nurse Mary Borden, will form the heart of an event at the Tower of London to mark the centenary of Armistice Day.

Borden’s poem, the third in a sequence entitled Sonnets to a Soldier, was written for a young British officer with whom she had an affair while running a field hospital during the first world war. It will be the basis for a choral work by the artist and composer Mira Calix, accompanying a light show that will fill the Tower of London moat from 4-11 November with thousands of individual flames, in the build-up to the 100th anniversary of peace.

No longer forgotten poet Mary Borden to be honored at armistice centenary.

Male rage and female pain have long been foundational literary topics. In books, as in life, narratives of male anger—from the Iliad to a speech by Donald Trump—command a reverent attention. (This interest in men’s interior lives, and in their ires, may have sociological roots: in her book “Toward a New Psychology of Women,” Jean Baker Miller suggests that all members of society stand to gain from theorizing about the psyches of the powerful.) Meanwhile, tales of female suffering, though profuse, are often dismissed as trivial or self-indulgent. Victims fare best when they do not yell, when they dwell not on injustice but on their sadness and on the intimate “impact” the violence against them has had. This vision of authorship, which privileges the subjective and the tragic—and which also underpins the mostly female genre of the harrowing first-person essay—reflects an understanding that women cannot be trusted to be impartial or truthful.

#MeToo and he said, she said, are also literary problems.