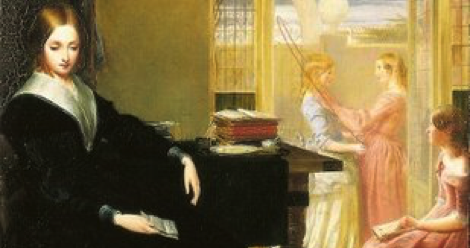 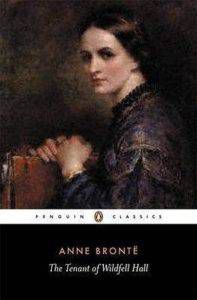 I no longer remember why, several years ago, I dove into a quest to learn more about Anne Brontë. I’d been a fan of Emily’s for years, and I knew she and Charlotte had a younger sister, but I can’t pinpoint the moment when the lightbulb went off in my brain and she became one of my heroes. Probably when I stumbled upon the preface to the second edition of The Tenant of Wildfell Hall. Then I was a woman on a mission.

Anne’s books couldn’t be found in my country at the time, I couldn’t afford an ereader just yet, and the BookMooch waiting list was far from encouraging. So I pored through Internet accounts of her life instead. It was like walking through quicksand. Some stories treated as an afterthought. Others so relished their own pathos that I was certain Anne would roll her eyes to the heavens if she’d been subjected to them.

Anne gets a lot of flak for being “the dull one,” the “least talented one.” Many people think that she only wrote because her family did so. This is patently untrue. She placed less value on fiction for the sake of fiction than her sisters did, that’s true. But she was hardly drifting along literature because she couldn’t occupy her time otherwise. Anne wrote because she wanted to use her skills for good. Her first novel explores the inhumane conditions of the working class, particularly governesses, and her second novel attacks the double standards applied to men and women, and condemns domestic abuse in a way that was almost unheard of in English literature in the 19th century. So much for dull.

What follows are only some of the many, many reasons I love Anne Brontë, and why you should too.

She was the only one in her family, except for Patrick, who could successfully hold down a job for an extended period of time. Not that she enjoyed her job: working as a governess seemed lovely in theory, but in practice, Anne found that they were woefully underpaid, often abused by the family they worked for, and had basically zero rights. She learned from her awful first experience with the Ingham family and moved on to a position with the Robinsons, who once again proved that a governess was considered barely a step above from a bug. Despite all the setbacks, Anne persevered and ended up becoming lifelong friends with her two youngest pupils.

She wished to tell the truth

Agnes Grey, her first novel, is a violent exposé of the terrible treatment bestowed on governesses. It is, in many ways, a thinly veiled autobiographical account of her time with the Ingham and Robinson families. It’s shocking to read about some of Agnes’s experiences, more so when we consider that “those very parts (…) were carefully copied from the life, with a most scrupulous avoidance of all exaggeration.”

The reality is that governesses didn’t marry their employers. They didn’t climb up socio-economic ranks. They didn’t even have a job with benefits and free time. They were used as mostly free labour, and often did two or three jobs for the price of one. This isn’t at all a knock against Jane Eyre. Charlotte Brontë wanted to tell a different story, and it’s a highly beloved one at that. But Anne wanted to educate as well as entertain. Different goals, different authors, different stories. Let’s respect them both, shall we?

Simply put, Anne wanted to tell the truth. She gives her protagonist a happy ever after, yes, with her own school and a sweet husband, but that is never the point of the novel; the relentless way it hammers down the realities of a governess’s life is. Because, although she “love(d) to give innocent pleasure. Yet, be it understood, I shall not limit my ambition to this (…) time and talents so spent I should consider wasted and misapplied. (…) when I feel it my duty to speak an unpalatable truth, with the help of God, I will speak it.”

Then there’s The Tenant of Wildfell Hall. Mary Sinclair got it right when she said that the slamming of Helen Huntingdon’s bedroom-door against her husband reverberated throughout Victorian England. This book was scandalous. Married women from Helen’s time did not only have no legal existence, they literally became their husbands’ legal property. This means that any income they produced during the marriage belonged to their husbands as well. Let’s not even get into any children the couple may have had. They belonged to the father, full stop.

In this context, having a woman successfully take her child, leave her abusive husband behind, and support herself through her art made shockwaves in English society. The book was slammed for everything from dwelling in “a morbid love for the coarse, not to say the brutal” to being “alike repugnant to Scripture, and in direct opposition to the teaching of the Anglican Church.” She didn’t care. She called out her critics for hiding from the truth behind pretty platitudes, and managed to crush the double standard for male and female writers while she was at it.

All of this in a three-page preface, y’all. That takes skill.

She made her own calls

Anne was a devout Christian. It is hard, however, to know which designation she subscribed to, if any. She’d grown up surrounded by her father’s liberal Anglican beliefs and her aunt’s similarly relaxed Wesleyan Methodist principles. Once in Roe Head, the school’s stout Calvinism challenged her long-held views of a loving God, plunging her into a spiritual and religious crisis.

It was during this time that Anne fell victim to what was then diagnosed as a gastric fever. From the large pool of possible reverends and ministers in the area, she chose to ask for Moravian minister Reverend James La Trobe. This encounter, combined with Anne’s own research, resulted in her life-long belief in the doctrine of universal salvation. In an 1848 letter to Reverend David Thom, she claims that she’s cherished the idea “with a trembling hope at first, and afterwards with a firm and glad conviction of its truth. I drew it secretly from my own heart and from the word of God before I knew that any other held it.”

We’re talking mid-1800s here. Consider the average minister’s reaction to a parishioner’s attempt at religious independence. One such minister in Agnes Grey gives us a fairly descriptive idea: “You must come to Church,” he says, “where you’ll hear the scriptures properly explained, instead of sitting poring over your Bible at home.” When the woman he’s talking to explains she can’t make it to Church because her rheumatism is so bad, he calls her a reprobate who probably won’t get into Heaven anyway.

Imagine Anne’s nerve. Not only was she reading and interpreting the Bible on her own, but she dared to share those beliefs with the world. That’s a massive strike against the world’s insistence to somehow consider her both a fragile flower and a rigid fanatic. She was neither. Just a woman trying to find her way on her own terms.

One of the most pervasive myths surrounding Anne is that she was happy to die. Charlotte Brontë says so herself, in a letter to publisher William Smith Williams: “Anne had had enough of life such as it was—in her twenty-eighth year she laid it down as a burden.” It is a testament to how little Charlotte knew her youngest sister that there are two mistakes in this one sentence alone: firstly, Anne was twenty-nine when she died, not twenty-eight. And secondly, she was not glad to die. Far from it.

In a letter to family friend Ellen Nussey, she wrote: “I have no fear of death (…) but I wish it would please God to spare me not only for Papa and Charlotte’s sakes, but because I long to do some good in the world before I leave it. I have many schemes in my head for future practice—humble and limited indeed—but still I should not like them all to come to nothing and myself to have lived to so little purpose.”

Anne wanted to live. But her life was cut short before her thirtieth birthday. And I can’t help but wonder, what did her schemes consist of? We will probably never know, and it kills me.

Anne was mistaken on one account, though: she didn’t live to little purpose. Her legacy endures today. It does for me, and for plenty of other people throughout the world—hopefully that will now include you.