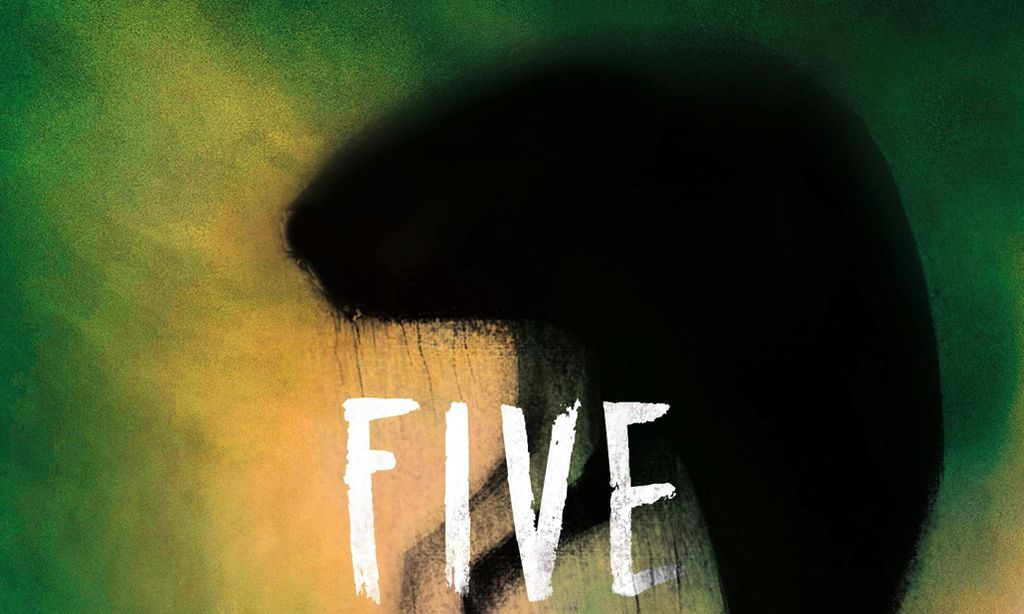 Ann Dávila Cardinal is a novelist and Director of Recruitment for Vermont College of Fine Arts (VCFA) where she also earned her MFA in Writing. A self-described Gringa-Rican, she comes from a long line of Puerto Rican writers, including poets Virgilio and José Antonio Dávila and her cousin, fiction writer Tere Dávila. Ann lives in Vermont with her husband Doug where she needle felts small reading creatures, and bikes four seasons a year. You can find her on Twitter at @anndcardinal. 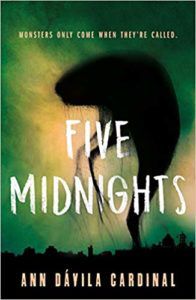 Five Midnights is a tale about coming of age, assimilation, death, and mortality. What was your inspiration?

Ann Dávila Cardinal: Well, I started with an interest in the myth of El Cuco, the Latinx answer to the boogeyman. I was fascinated that he was used as a tool to get children to behave. That means coming of age with therapy! And I think all young adult writers are interested in coming of age stories, they are at the heart of most of our work. And as someone who spent their life straddling two worlds, assimilation is something that is of strong interest to me, or the choice NOT to assimilate. And when you lose a parent young, the theme of death and mortality often bleed through the creative work. It’s just part of who you are, you know?

Puerto Rico as an island has a strong presence in the novel and is practically a character in itself. What story do you feel Puerto Rico wants to tell in addition to Javier’s and Lupe’s?

ADC: I wouldn’t presume to understand the island’s story: the longest stretch I ever lived there was over summers in my childhood. But I will say that it has an immeasurable number of stories to tell. Way too many people in the mainland U.S. didn’t even know Puerto Ricans were American citizens until after Hurricane Maria. Its history of colonialism and oppression, the use and abuse of its citizens as guinea pigs for big pharma, and a military test site on Vieques island. The extraordinary wealth of literature and visual art and music…it is my wish to see all these stories told. Most of what I’ve written in the last 15 years has been based there. That island is a major character in my own life, and I think about it every single day, so naturally it plays a big part in my work.

For a good portion of the story, Lupe has to defend her Puerto Rican heritage from locals, even Javier. Why does no one want to give her a chance, especially since she’s biracial?

ADC: Ah, but there’s the issue: she’s not biracial. And neither am I. A fellow Latinx writer referred to me as “white-passing,” but I must own up to the fact that I’m not passing, I’m white with all the privilege that comes with. I feel better describing Lupe and I as bi-ethnic or bi-cultural.


But on the other side, the reason she’s defensive is because sometimes we have to justify our identity because of our privilege. At this point in my life I’m totally fine with that, but as a teen you’re already struggling to understand identity, and to be told you are not enough of whatever blood runs through your veins is really, really hard. I’ve been called “blanquita” on the island much of my life, and that is not intended as a compliment. Yes, I lack “la mancha,” the spot that is said to identify someone as born of the island, but Lupe and my manchas are inside, running through our veins side-by-side with platelets and white blood cells, like small life rafts in a fast-running river.

Marisol also bitterly talks about how some Puerto Ricans leave the island and forget who they are, letting corporations and drug dealers take over. We’ve seen these accusations in real life and social media as well. Is this a common problem?

ADC: On an island of 3 million people, Puerto Rico lost 14% of its population from 2017 to 2019 due to economic struggles and Hurricane Maria. Fourteen percent. Do I blame them? No. We must do what we have to in order to protect and support our families and ourselves. But I know there is resentment from those who stayed through all the turmoil. This is so evident in the controversy about the release of the Netflix film “After Maria.” The documentary short film directed by Nadia Hallgren focuses on women who left the island after Maria and there are protests and petitions saying the film ignored the plight of those left on the island, those who stayed. My mother dealt with this disconnect in the 1940s when she moved to New York City for college. Whenever she went back home to Bayamón, she felt she was put on the defensive, was told her Spanish was not what it was, that she was becoming a gringa. I’m afraid it’s an ongoing problem. I hope the focus could be on what we have in common and what unites us, not what separates us. Boricuas need to stick together wherever they are geographically.

Father Sebastian is a great character who, while disbelieving of the mysterious events that Lupe and Javier describe, ends up helping a great amount. His logical deduction ends up right, even if he doesn’t grasp the full gist. What do you think of Father Sebastian and his part to play?

ADC: Thank you, I love Sebastian. Doesn’t hurt that he looks like Lenny Kravitz. Catholicism places a huge part in Puerto Rican culture, and for me he represents the best of it. Especially the way the lines are blurred between the church and the spirituality of the island, which has its roots in African and Taino cultures. My grandmother went to church every day, had saint candles and rosaries everywhere, but she also put a full glass of water behind the door to absorb bad spirits. And Sebastian is Jamaican. Talk about a culture rich in mythical and spiritual traditions! But also, for many recovering addicts the church is a gateway or support system to twelve step programs, and therefore a huge part of their recovery. My mother called her priest when she was ready to get clean and sober. I wanted to honor that relationship.

What can readers do to help out Puerto Rico? Are there other books or resources you can recommend?

ADC: Thank you for this question. I think at this point, the most important way to support the island is to go there. The island depends on tourism, so it’s a win-win. Many of the big hotels have recently reopened and businesses are ready to welcome visitors. Seriously, summer is eternal, the people are warm and lovely, and the food is spectacular. Go and spend money! As for resources, a book I recently read and absolutely devoured was War Against All Puerto Ricans by Nelson Denis. Talk about an eye opener. It leans to the left and is not without controversy (what good book is?) but things like the story of the torture and irradiation of National leader Pedro Albizu Campos made it read like a horror novel. No matter what your leanings, it is an important book. And I am really looking forward to Fantasy Island: Colonialism, Exploitation, and the Betrayal of Puerto Rico by Ed Morales that is coming out from Hachette in September.

Can you tell us about your upcoming projects?

ADC: Sure, thanks for asking! I am currently working on the sequel to Five Midnights with my editor Ali Fisher at Tor Teen. I can’t say too much about it, just that it features several of the characters from the first book and takes place after Hurricane Maria. I also have an adult magical realist novel—working title The Storyteller’s Gift. My homage to Latin American magical realism, it’s a coming-of-age novel that deals with the importance of family, story, and belonging, and is set 1960s and ’70s Puerto Rico. It is the most autobiographical thing I’ve written.