PEN America held its annual Literary Free Expression Awards Gala last month at New York City’s Museum of Natural History. This glamorous yet serious celebration was attended by the leaders in literature, journalism, media, activism, and culture, who came together to honor Anita Hill with its PEN Courage Award. Bob Woodward, celebrating 47 years as a journalist at The Washington Post and the publication of 19 nonfiction bestselling books, was awarded the PEN Literary Service Award. 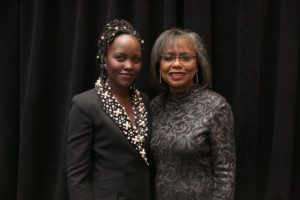 The PEN celebration netted $2.6 million for the organization’s work that advocates for human rights and free speech. PEN is critical for our time: we have a United States president enraptured by the authoritarian regimes that crush free speech. For the first time, the United States, in two separate studies undertaken by Reporters Without Borders and by the PEN organization, has earned the dubious distinction of ranking fifth in the world’s deadliest countries for journalists—following Afghanistan, Syria, Mexico, and Yemen. In a country where free speech and a free press are protected under the First Amendment, free expression is no longer a guarantee.

Last year, there were 35 reported incidents in the United States in which 42 members of the press were physically attacked. These writers are also subjected to a relentless onslaught of online hate and harassment that targets female journalists and journalists of color.

There is work to be done to ensure the safety of writers around the globe. As bibliophiles and Book Rioters, it is important to pay attention to the attempted decimation the written word.

“As an organization that protects and amplifies the voices that those in power seek to silence, it is fitting that America honors Anita Hill,” stated Nyong’o. “She had no safety in numbers. She was calling Time’s Up decades before the wider society was ready to blow the whistle. She made her accusations against a man who would sit on the nation’s highest court and wield power for decades to come. Twenty-eight years later, amid an unstoppable wave of personal revelation and truth-telling that emulates Hill’s initial heroic act, a paradigm shift is occurring. With the #MeToo and Time’s Up movement we can speak together.”

Accepting the PEN Courage Award after a lengthy standing ovation, Anita Hill gave an acceptance speech that emphasized the significance of using her voice to change the course of history. “My ancestors’ story reminds me that I must never take having my voice for granted, and I must never abuse it. It’s taken generations to gan this privilege, the privilege I have to write and to speak out with the truth, and to speak truth to peer. It’s taken that long, and I will never, ever give it up.”

The work of Bob Woodward has a singular purpose: to hold the White House accountable for its actions. Fellow journalist and co-author of All the Presidents Men Carl Bernstein was in the audience and joined Woodward on stage after Woodward’s speech. The book helped change history: President Nixon became the first president to resign amid his impending impeachment given the facts from the reporting of Woodward and Bernstein.

Woodward drew several parallels between the Nixon era’s blind hatred towards their perceived “enemies” and how that vitriolic bitterness has settled into the Trump era. “Why all the criminality? Why all the abuse of power? It was hate, the poison of hate, that awful, destructive force of utter contempt for other people. It was the engine of his presidency is so many ways and it, in the end, destroyed him. Now, 45 years later, President Donald Trump publicly exploits the divisions in this country without restraint. The Trump rallies are primal amphitheaters. He has turned hate, in his own way, into ammunition for personal and political warfare.”

The PEN/Barbey Freedom to Write Award has a good record of freeing imprisoned journalists with the tremendous public profile of the award and with the global reach PEN employs that amplifies the urgency of their causes. Since the award’s inception in 1987, 39 of the 44 jailed writers have been released after receiving the award.

So, why do we write plays, draw comics, and record the written word? Is art simply the search for our own truth and illumination? Are we driven to create to become something greater than our mortal selves? Whatever form the creative compulsion may take, artistic expression always needs to be protected.

Reading the words of Anita Hill and Bob Woodward, stellar luminary beings who have sought their own truth and have changed the world, something elemental comes into focus. Free expression challenges the authoritarian regimes around the world. Given the current presidential administration’s penchant for all things authoritarian, free speech has become endangered in the United States. The message: we all need to pay attention.

Last year, Book Riot published a post on PEN America’s Online Harassment Manual, an essential guide for anyone writing on the web.